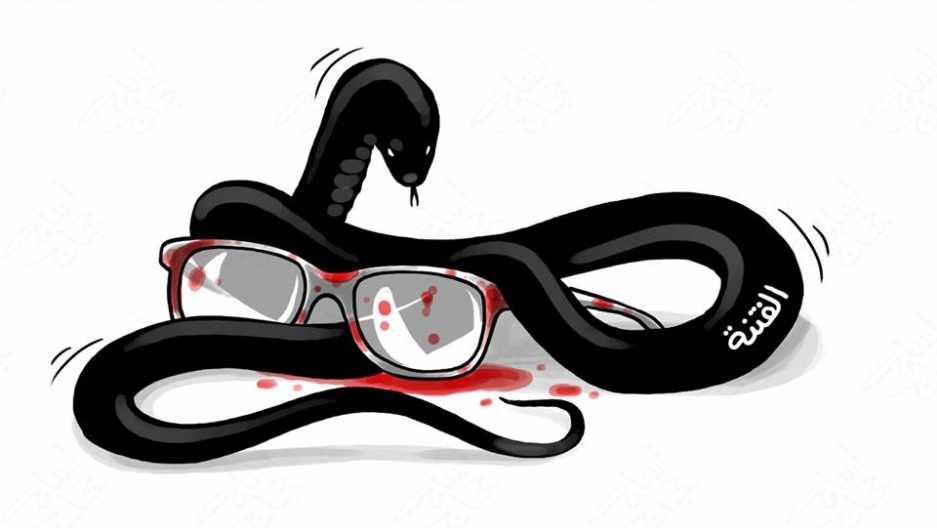 Cartoonists are under threat, and so are the people who share their work.

The scene of the crime was outside an Amman courthouse, where Hattar was to stand trial for authoring a Facebook post containing a “blasphemous” cartoon. The story is still unfolding, though the identity of the gunman has been reported.

Hattar’s family quickly blamed the Jordanian government for putting the writer at risk; the Interior Ministry was apparently aware of threats against him and clearly did not provide sufficient protection. The Arabic Network for Human Rights Information similarly blamed the authorities, as did the New York-based Committee to Protect Journalists. Meanwhile, a high-level government spokesperson was quick to condemn the murder. So was the Jordanian Muslim Brotherhood. The Jordanian Cartoonists Association has yet to issue a statement, though members of the organization have drawn memorials for Hattar.

The artist behind the cartoon Hattar shared is unknown, but the work seems to have come from a semi-popular atheist Facebook page.

It is possible that the assassin’s motive doesn’t relate to the offending cartoon, but rather the Hattar’s political leanings. He was a supporter of Syrian dictator Bashar al-Assad.

But Hattar’s killing aside, the very fact that the Jordanian state had put him on trial for sharing a cartoon goes to the heart of a broader set of concerns about the fluid standards of acceptable speech in the country. The matter demands further thought.

First, a word on the medium: Hattar shared this cartoon on Facebook. We know that cartoonists navigate tricky red lines set by states and violent extremists, and in the Middle East the job has always been dangerous. With social media as a primary platform for communication these days, the risk is rapidly shifting from cartoonists and creators to users and sharers. Hattar’s case highlights the dangers of sharing or re-posting cartoons.

One alarming example — which admittedly is in a different country and on a rather different scale — would be the case of Amr Nohan, the Egyptian military conscript who was convicted for sharing a Facebook meme of a Mickey Mouse president. In both cases, and several others, Facebook is the medium of offense. What can the platform be doing to protect its blasphemers and dissidents? A lot more, I would argue, and free speech advocates should be calling Facebook for comment.

Second, blasphemy is an ambiguous and contested category of speech. Its inherent vagueness is why “insulting religion” is a charge so often lobbed at atheists or liberals. Each such case demands scrutiny. In Arabic editorial cartoons, there are frequently characters with religious undertones or overtones, such as Father Time, the grim reaper or angels — and in the past even drunkard sheikhs. Sometimes “prophets” like Adam and Eve appear, though this too can be considered “insulting.” The definition of blasphemy evolves over time.

Furthermore, the legal issues surrounding blasphemy do not exclusively relate to Islam. Anyone dismayed by the fact that the case against Hattar was able to reach a Jordanian court should also keep in mind that the Catholic Church sued the Lebanese comic magazine Samandal for “insulting religion” just a few years ago — and won.

Importantly, it is often cartoonists themselves who are the most influential voices in challenging the boundaries of blasphemy. Consider the case of the Palestinian cartoonist Mohammed Sabaaneh, who was nearly fired for drawing the Prophet Mohammed (even though he had only drawn a robed figure). As I reported last year:

“We should oppose everything that is forced on us, by governments or dictatorships or the authority of religion,” says Sabaanah. And as for respecting religious symbols, Sabaanah claims that’s exactly what his cartoon was intended to do: “The way to defend Islam is through art. When Islam is criticized through art, we should respond through art.”

It should come as no surprise that Sabaaneh was one of the first artists to memorialize Hattar in a cartoon.

Third, I want to point out that Jordanian cartoonists consistently lampoon ISIS in their daily drawings. One of those cartoonists, Osama Hajjaj, has faced death threats from the terror group. (He is the illustrator of the blood-stained glasses above.)

Many commentators are suggesting that the cartoon Hattar posted insulted ISIS rather than religion, and that the two shouldn’t be conflated. Others have censured the cartoon itself while also condemning the chilling murder. Some news headlines have described the cartoon in question as “anti-Islam” and others as “anti-ISIS,” distinctions that demand further inquiry.

Will news outlets agonize over publishing this offending cartoon as was the case when Charlie Hebdo printed an image of the Muslim prophet? So far, most have paraphrased or quoted the punchline, avoiding the image itself.

Jonathan Guyer is a fellow of the Institute of Current World Affairs and a contributing editor of the Cairo Review of Global Affairs. He blogs about Arabic comics and caricature at Oum Cartoon. A version of this commentary first appeared on his blog.