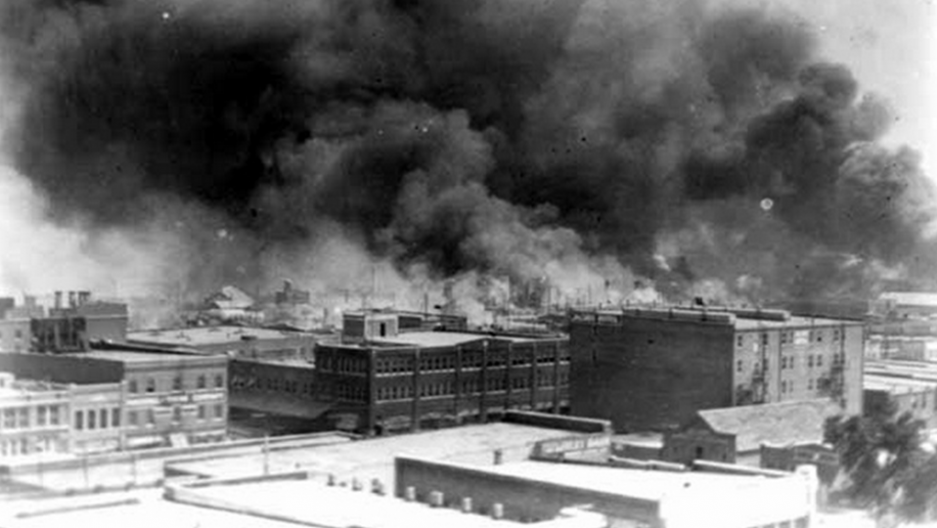 Destruction during the 1921 Tulsa Race Riot.

The city of Tulsa looks all too familiar this month. Protesters are demanding justice for yet another police shooting of an unarmed black man.

A series of disturbing videos show a Tulsa police officer killing 40-year-old Terence Crutcher after his vehicle broke down on his way home from a class at Tulsa Community College. The white officer who shot him, Betty Jo Shelby, 42, was charged Thursday with first-degree manslaughter.

Shelby says she shot Crutcher because she feared for her life when he stopped responding to commands and began walking away from her with his hands raised in the air.

Though the incident raises more questions about the relationship between law enforcement and the black community, Crutcher's death cannot be examined without considering the place where it happened.

Tulsa is a city with a complicated history of racial tension and segregation. That tension climaxed during the Tulsa Race Riot of 1921 — the violent battle between whites and blacks took the lives of 300 people and ravaged Greenwood, a neighborhood once known as the "Black Wall Street."

But Mechelle Brown, program coordinator at the Greenwood Cultural Center in Tulsa, says the riots are barely discussed in the city and hardly remembered in Oklahoma today, something that is bringing new context to the death of Terence Crutcher.

“The racism that existed here during the race riot and in fact led to the race riot still exists,” she says. “It is an inherited racism that has been passed down from generation to generation that has never truly been addressed. While we see and hear people making racist comments and acting in a racist matter, when they are confronted about that racism, they deny being racist at all. So you can’t address it, handle it, or deal with it if you can’t admit that it exists.” 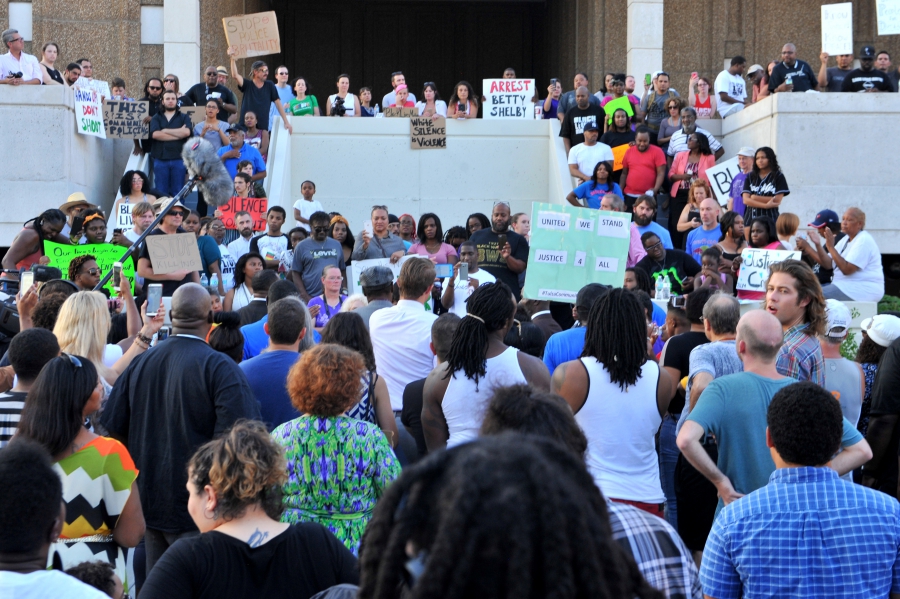 The Tulsa Race Riot of 1921 has been cut out of the city’s memory for decades, Brown says, but her organization has worked to preserve this history.

“If you were not to visit the Greenwood Cultural Center where there are actually exhibits, you would not necessarily hear about [the riot],” she says. “It’s only been recently — within the last year or so — where they made it mandatory that it has been taught in public high schools in history classes. However, they have a lot of leniency as to how much they talk about it.”

When it comes to remembering the Tulsa Race Riot and the pain it inflicted, Brown argues that Oklahomans have always made an effort to “sweep it under the rug,” even though that are concerted efforts to remember other tragedies from long ago.

“When we were attending black history classes during my youth, we talked about slavery and the Civil Rights era, and they never mentioned the events of the Tulsa Race Riot or ‘Black Wall Street,’” she says. “There’s definitely some reluctance to talk about a history that people know that their ancestors, their relatives may have been and could have been involved in.”

She continues: “We still have two living race riot survivors, but we identified 165 survivors in 1996. Some of the people that were here shooting and killing unarmed, innocent men and women were children — some of them were children of Ku Klux Klan members who had been armed, brought to Greenwood, and given permission to kill innocent people, and knew that there would be no repercussions. People don’t want to acknowledge this part of our history.”

Brown says the tensions surrounding the death of Terence Crutcher echoes that of the 1921 Tulsa Race Riot.

“What’s so troubling and frustrating for us as a people today is that we are still dealing with that same racism that is still evident in our police department as it was in 1921 — there were police officers that were participating in the riot,” she says. “But it helps us to understand who we are and where we come from, and what we’re able to overcome as a people.”

This story first aired as an interview on PRI's The Takeaway, a public radio progra that invites you to be part of the American conversation.