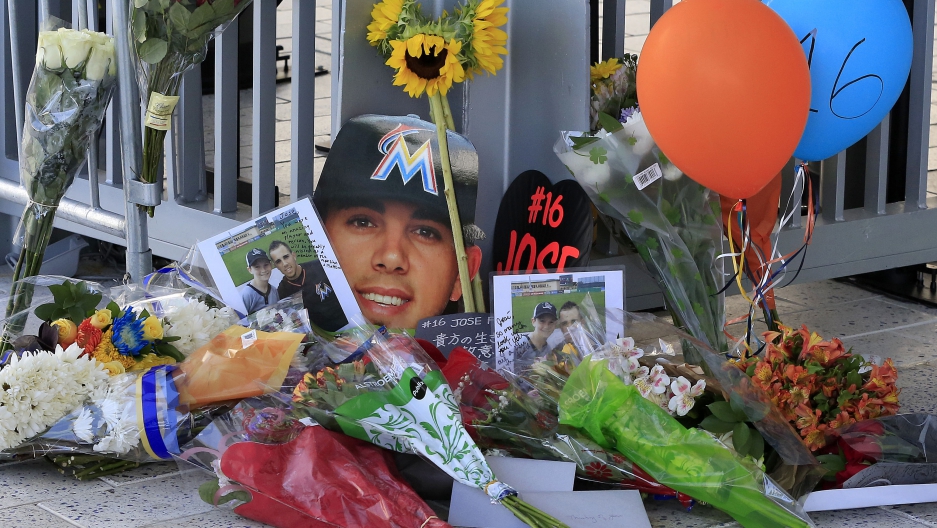 A memorial of flowers and photos are placed outside a gate at Marlins Park in honor of Miami Marlins starting pitcher Jose Fernandez who was killed in a boating accident.

Baseball is mourning the tragic loss of a star player.

Pitcher Jose Fernandez of the Miami Marlins died over the weekend in a boating accident.

The 24-year-old Fernandez was beloved by the team, and by the wider Miami community.

“He was one of us,” writes Miami Herald columnist Fabiola Santiago.

Santiago says there was a special connection between the player and the city due in part to the perilous journey Fernandez made from Cuba to Florida by boat in the middle of the night.

It’s a story often told in the sporting world: The short version is that Fernandez jumped overboard to rescue a person who had fallen out of the boat. That person, unknown to him before he dove in, was his mother. He shared the story often. But what he shared more was his time, as Santiago writes:

He never tired of showing how grateful he was to be in this country, how miraculous his good fortune to be in the city of his dreams.

It’s stunning and sad that he died in the waters where he said he liked to go to find serenity. The 32-foot boat he was riding in with two friends capsized after hitting a treacherous jetty barely visible at high tide at Government Cut between Miami Beach and Fisher Island. There were no survivors.

This is every parent’s nightmare.

“I’ve seen the fans coming to the stadium with flowers and tears," Santiago said in an interview with The World. "Online, people are posting selfies they took with Jose. He was known to do that. After the games, he would kiss his mom, his grandmother, his girlfriend and then he was off to meet with the fans.”

Fernandez had a special connection with his fans.

“Everybody else would kind of walk off the field and go home after the games. But he stayed behind," Santiago explains. "Baseball players are no longer known for that kind of generosity of their time. And that seems like that was something that was done a long time ago. He just did it naturally. For him, it seemed effortless to relate to the people of this city.”

On what Fernandez taught her about life, she says:

“His smile on the field. His zest for life and for living it all and giving it all, that really what’s he brought home.”