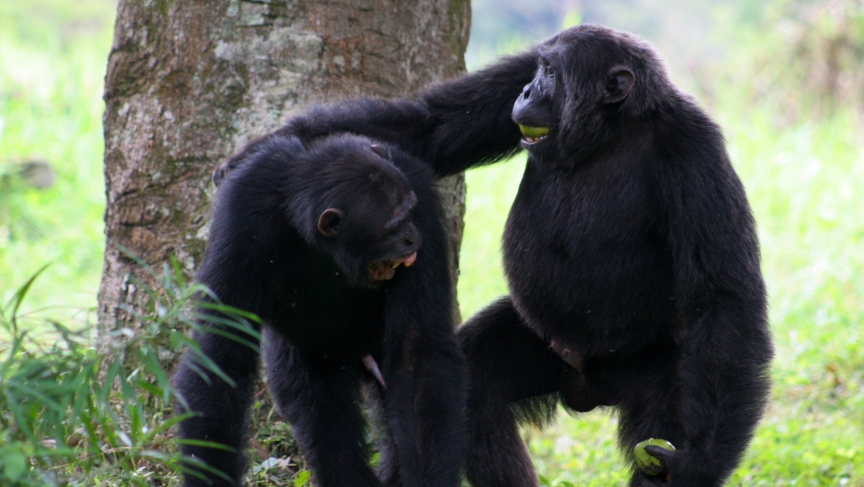 We talk about war and human violence every day on the news program I host, The World. But, as experimental psychologist Steven Pinker reminded me recently, "You don't say where things are going right. What about all the parts of the world that used to be in flames, just consumed by war, but which are now at peace?"

Pinker and his Harvard colleague, the primatologist Richard Wrangham, joined me at a science media summit in Boston last week to examine whether humans are on track to build a more peaceable future. The evidence is there to suggest yes, they say — in death certificates, trade figures, and the behavior of chimpanzees.

I asked both of them to consider our prospects, as a species, for living in peace with each other. Pinker answered first.

"For 450 years, from 1500 to 1950, war got less frequent but more damaging," he said. "There were fewer fights that grew into wars. When they did happen, they killed more people per year, a kind of perverse efficiency in how quickly you could kill people."

But then a centuries-long trend shifted.

"There was a turnaround after World War II, after that big spasm of violence," Pinker said. Since then, "both the number of wars and the rate of death per war have gone down in tandem."

Pinker's data show humans are getting better at living together.

But you couldn't tell that to Palestinians in the Gaza Strip. Or to Native Americans in North Dakota. And let's not ignore the genetic piece to this puzzle. Primatologist Richard Wrangham has been looking into the behaviors of our closest genetic relatives, chimpanzees, for decades.

"In the 1960s, people used to say that humans were the only species in which individuals were motivated to go out and kill members of the same species, and there is a lot wrong with that statement," he told me. "But what was dramatic, starting in the 1970s, was the discovery that ... adult male chimpanzees regularly go off on border patrols and make efforts to penetrate into neighboring areas, and, indeed, damage and kill members of neighboring groups. So this was a kind of primitive warfare, which really shocked people because it reflected the possibility that there is something deep in our evolution about our own tendencies for killing."

"This was the first time anything like this had been seen in chimpanzees, and it coincided with the fact that Jane Goodall gave bananas to bring the chimps to a central area in their territory, so that she could get to see them closely and get them comfortable with her presence. Well, that naturally led to the possibility that the bananas had something to do with this. ... It's like, you know, putting money in front of people," he said.

"So the chimps did squabble, as it were. But, you know, there's a [difference] between fighting [that erupts] over competition for something, [and] this very planned, deliberate attempt to go and attack members of the neighboring groups, because that did not emerge out of any kind of hot emotion."

Wrangham has spent a lot of his professional life trying to understand why groups of chimpanzees go to war. He says neighboring groups avoid aggression when there's a balance of power and when neither group has a clear advantage — something the world's diplomats seem to rediscover again and again.

I asked Pinker whether we humans can do better than chimps. Over time, are the reasons we go to war decreasing?

"I would say that some of the reasons are decreasing," he said, "because as we have a more integrated economy, both globally and within countries ... as there are more opportunities for positive sum cooperation — as opposed to zero sum competition — then it becomes less tempting to engage in violence."

Pinker then quoted a line from The Godfather: "I don't like violence. ... I'm a businessman. Blood is a big expense."

"And as blood becomes a bigger expense," he continued, "and as you buy and sell things, as opposed to plundering things, other people become more valuable alive than dead. And there is both within a country, and globally, a correlation between engaging in commerce and refraining from war. You don't kill your customers."

Or to put it as The Godfather did: "Leave the gun. Take the cannoli."

Marco Werman is the host of PRI's The World. Steven Pinker and Richard Wrangham spoke with him at the Science Media Awards & Summit in the Hub, SMASH! in Boston on Sept. 22, 2016.