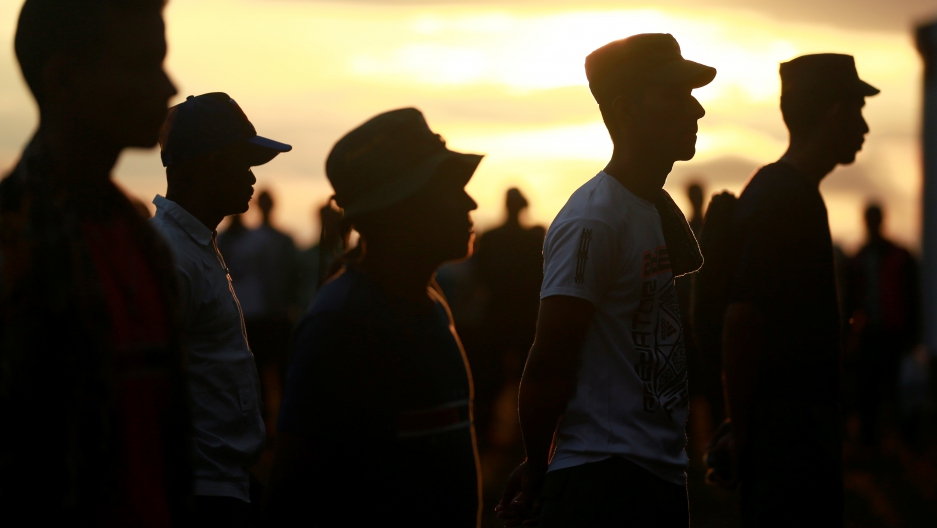 Fighters from Revolutionary Armed Forces of Colombia (FARC),stand in line during the opening of ceremony congress at the camp where they prepare for ratifying a peace deal with the government, near El Diamante in Yari Plains, Colombia, September 17, 2016.

Colombia's government and the leftist FARC rebels prepared to sign a historic peace accord Monday to end a half-century civil war that has killed hundreds of thousands.

A solemn ceremony on the Caribbean coast witnessed by international dignitaries will set the seal on a four-year process to end Latin America's last major armed conflict.

"Today we are experiencing the happiness of a new dawn for Colombia," President Juan Manuel Santos said on Twitter.

He called it "a new stage in our history — one of a country in peace!"

He will sign the accord at 6:00 p.m. ET with his former enemy, FARC leader Timoleon Jimenez, at a ceremony in the colorful colonial city of Cartagena, the government said.

Santos opened the day's events with a tribute to the Colombian military and police.

A prayer service for peace and reconciliation was scheduled later at an 18th-century Catholic church in Cartagena's old town, led by the Vatican's Secretary of State Pietro Parolin.

The guests at the signing will include UN Secretary-General Ban Ki-moon, US Secretary of State John Kerry and an array of Latin American leaders.

They include Cuban President Raul Castro, whose country hosted the nearly four-year-long peace talks that produced a final deal on August 24.

The 2,500 expected attendees have been invited to wear white for the 70-minute ceremony.

Once the peace agreement is signed, the European Union will temporarily suspend the FARC from its list of terrorist organizations, the bloc's ambassador in Bogota, Ana Paula Zacarias, told RCN television.

The group could be definitively removed from the blacklist after a six-month review process.

Colombians will vote on the peace accord in a referendum on Oct. 2.

The country's second-largest rebel force, the leftist National Liberation Army (ELN), agreed to hold fire ahead of the referendum.

The government has yet to begin planned peace talks with the Cuban-inspired ELN, saying it must first stop kidnappings.

The FARC, a Marxist guerrilla group, launched its war on the Colombian government in 1964, in the aftermath of a peasant uprising that was put down by the army.

Such guerrilla armies were common across Latin America in the latter half of the 20th century. But now, 25 years after the Cold War, Colombia's is the last major armed conflict in the Americas.

FARC delegates unanimously ratified the deal Friday at a national conference in their traditional stronghold in southeastern Colombia.

"The war is over," said Jimenez, who goes by the alias Timochenko. "We are all going to build the peace."

Under the deal, the FARC is now to relaunch as a political party.

Timochenko, 57, whose real name is Rodrigo Londono, is expected to remain its leader.

The rebels came to the negotiating table after being weakened by a major army offensive led by then-defense minister Santos, who served in the post from 2006 to 2009 before becoming president.

The new talks opened in Cuba in November 2012.

After years of halting progress, delegates concluded a final, 297-page accord last month.

It covers justice and reparations for victims of the conflict, land reform, the FARC's relaunching as a political party, disarmament, fighting drug trafficking that has fueled the violence in the world's largest cocaine-producing country, as well as implementing and monitoring the accord.

It grants an amnesty for "political crimes" committed during the conflict. But it will not cover the worst atrocities, such as massacres, torture and rape.

The FARC's estimated 7,500 fighters are to leave their mountain and jungle hideouts and disarm in a UN-supervised process.

Monday's signing ceremony is the second-to-last step in ratifying the peace deal. Colombians will vote on it in the Oct. 2 referendum. Recent polls show the "Yes" camp in the lead.