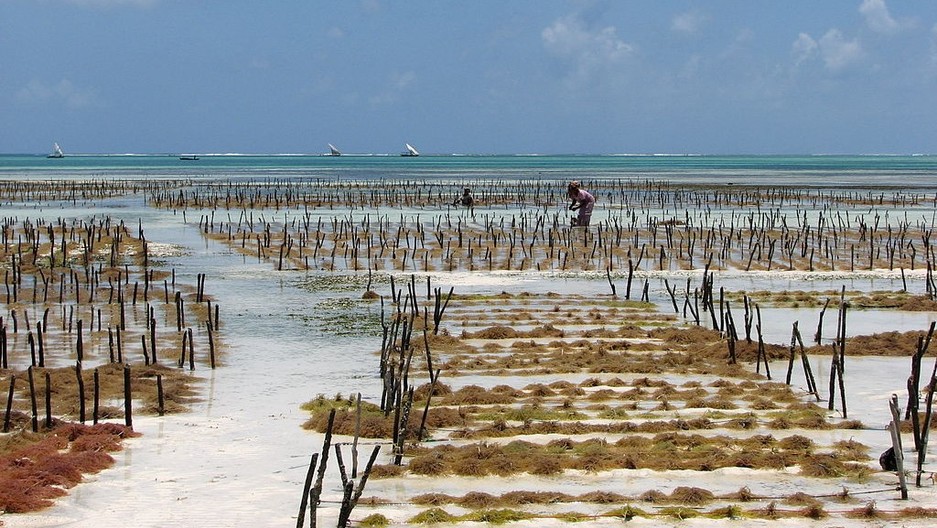 Aquacultures of red algae define this beach in Zanzibar.

Seaweed is trending. Demand for the fast-growing, nutrient-rich food is on the rise, and what’s not being eaten is now used in everything from skincare products to pharmaceuticals and industrial adhesives.

In 2014, the seaweed industry was worth more than $6 billion, and today, farms of cultivated seaweed continue to spread off the coasts of China, Korea, Indonesia and elsewhere. But while seaweed’s popularity brings with it plenty of economic and nutritional benefits, a new report from scientists at the United Nations University cautions that the way we’re farming the crop may be putting our supply at risk.

“Many countries such as Korea and Japan and China, Indonesia, the Philippines ... have benefited from seaweed farming for hundreds of years, and they're doing very, very well,” says Elizabeth Cottier-Cook, a marine biologist for the Scottish Association for Marine Science and the report’s lead author. “It provides very poor, rural communities with an excellent income.”

And in the last decade, rising demand for seaweed has also opened new production markets in places throughout Canada, America and even Scotland. As crops go, seaweed isn’t fussy: One variety native to Indonesia and the Philippines is now grown in over 30 countries.

“It's really easy,” Cottier-Cook says. “You just propagate it like you would some of your plants. You take a cutting, and then you can move that cutting to any place in the world where it's likely to grow, where the temperature is right.”

Despite the ease with which the marine algae can be transplanted, Cottier-Cook warns that doing so is still risky business. Seaweed cuttings from other farms can harbor 'hitchhikers,' or pests and pathogens that may also thrive in a crop’s new location.

And as with other crops, seaweed’s growing global monoculture also warrants caution. Between 2011 and 2013, the Philippines lost a seaweed harvest worth $310 million to ice-ice disease, a bacterial infection that causes part of the plant to bleach itself, and die, as if turned to ice. With so little biodiversity between farms, the disease spreads like a deep freeze.

“You can lose your entire crop very quickly because of course, [the plant] is just a clone,” Cottier-Cook says. “It’s got the same genetic makeup throughout the entire farm. So one plant gets infected, and that’s it.”

“One of the recommendations we really called for, as well as improved biosecurity on your farm, is actually to produce far more cultivars of the seaweed, [with] different genetic makeups,” Cottier-Cook says. “So you have seed banks ready, so if a farm fails you're ready to supply it with a new cultivar — the same species, but of a slightly different genetic makeup that may well be resistant to that disease.”