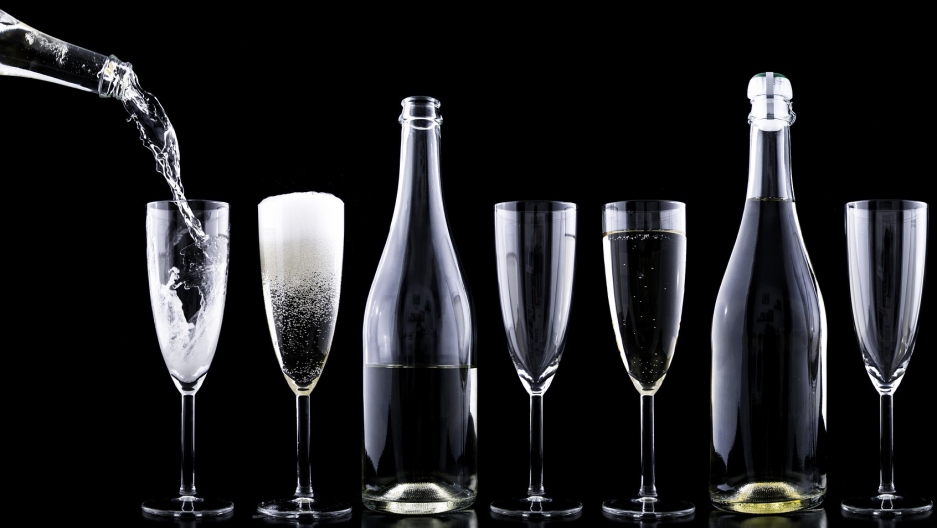 Is that bubbly sweet or dry? Experts say that color and other sensory phenomena can prime our brains to expect certain flavors when we drink wine.

Wine aficionados say that drinking wine involves far more than a simple evaluation of taste. Aroma, temperature and a lovely bottle can all factor into our experience of, say, a Bordeaux. But, what if outside factors like a wine’s color, or even the lighting in the room we drink it in, can actually change how we perceive the flavor?

David Munksgard, a winemaker at Iron Horse Vineyards in Sonoma, California, says he uses a bit of red wine in some of his sparkling blends to hint at what the bubbly might taste like — before patrons ever take a sip.

“It sets the stage,” Munksgard says. “If [the wine] was in a dark glass and you couldn't see, your brain wouldn't be working on that. You would just simply go on what it smells like and then what it tastes like. But you can't help it as a human being to start thinking about what that wine is going to smell and then taste like.”

Charles Spence agrees that color and other sensory phenomena can prime our brains for flavor, setting expectations about the taste that anchor our experiences when we’re actually eating and drinking. Spence leads the Crossmodal Research Laboratory at the University of Oxford and has studied the effects of “mood lighting” on our perception of a wine’s taste. He says that our tendency to color-categorize flavors may have evolved to help us judge our food for both ripeness and toxicity.

“What kind of world would we be in if we had to put everything to our lips to ... know whether it is nutritious or poisonous or not?” Spence asks. “So our brains learned to make predictions and say, ‘OK, I've learned that when I see a ripe red fruit color, it's probably going to be sweet. When I see something that's green, probably it’s unripe, maybe sour or less nutritious.’ If I can make those predictions, then I’m in a better place to know what trees to climb for the nutritious fruits and what else to eat.”

To test the influence of color on a wine's taste, Spence and his team ran an experiment in 2014 in which they gave over 3,000 Londoners red wine in black tasting glasses, obscuring the beverage's color. They then asked people to sip the same drink under white, red and green lights and rate how they thought it tasted each time.

“What we were able to show with these 3,000 regular drinkers — not wine experts or such — is that we get about a 15 to 20 percent change in people's perception of the fruitiness or freshness of the wine, how much they liked it, simply as a function of the background illumination in the room in which they were tasting,” Spence says.

For example, Spence says that even when we can’t see into our wine glasses, a red-lit room can nonetheless prepare our brains to expect sweetness.

“When we had winemakers who came to the Color Lab, this event, they were the real experts,” Spence says. “You’d think they would not be affected by the background color — [that] they can just identify what is in the glass, and the taste and bouquet. Yet, they were coming away saying, ‘Wow, we need to know about this.’”

Spence says that other sensory information can also help us make snap judgments about a wine's character well before we sip. Did you pop a cork, or crack a screw cap? What sound did the liquid make when you poured it into the glass? Sound, Spence says, is the “forgotten flavor sense.”

What about when you (or a waiter) set the wine bottle on the table, perhaps with a satisfying thud? Spence says that too is a game of the senses, to a point.

“When we've tested or evaluated the six or seven hundred bottles in the Oxford wine store ... what you find is that for every extra pound you pay, you get eight extra grams of glass,” Spence says. “There are some producers out there who are making bottles that are maybe a two and a quarter kilograms of glass when the wine is emptied, compared to others where it's less than a kilo [when] full of wine.”

Ultimately, though, you can’t put lipstick on a pig — or pass cheap wine off as finer stuff in a heavy, stoppered bottle.

“It may be that midprice wines can be shifted all over the place, but what do you call it? ‘Two Buck Chuck?’ You might have a bigger challenge,” Spence says. “Just by putting it in a heavier bottle, you might convince some, but I think not all.”