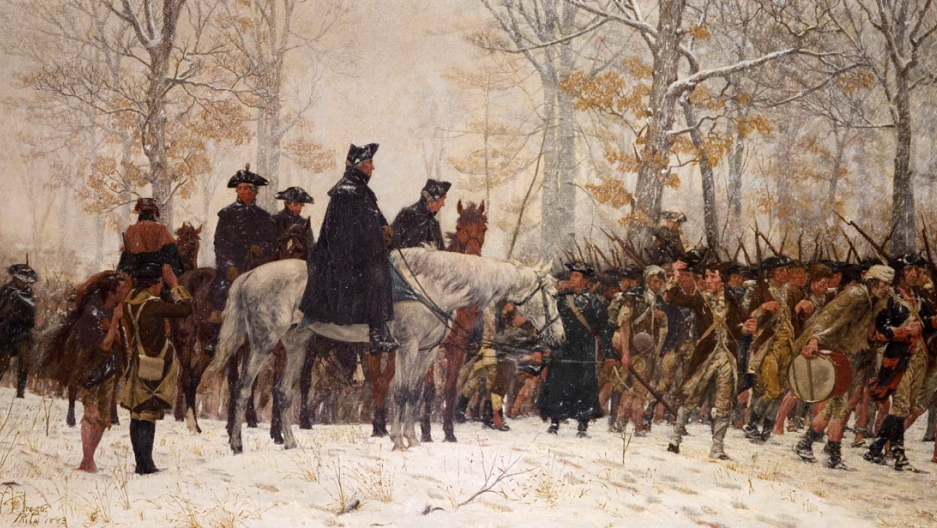 “The March to Valley Forge” by William B. T. Trego.

The worst smallpox epidemic in Boston history was a turning point for control of the ferocious disease in the Massachusetts Bay Colony. It also helped launch America's first independent newspaper and set the stage for the American Revolution.

That's according to a new book called "The Fever of 1721," by Stephen Coss.

Until it was finally eradicated, smallpox was the deadliest disease in the world. When it hit a town like Boston, nearly everyone who hadn’t already had the disease would get it. Fatality rates, which varied by group, could be around 30 percent, or, in the case of the Native American population, as high as 90 percent.

Today, with our understanding of infection and hygiene, the idea of injecting pus into an open wound sounds repellent, to say nothing of dangerous. Yet it was this very procedure, known as inoculation, which saved many lives during the severe smallpox outbreak chronicled in "The Fever of 1721" and led to events that would affect US history.

Inoculation was already well-known to humans throughout history, but due to “simple Western arrogance,” Coss says, it had not been accepted in Europe and America.

Inoculation and vaccination are different things. Inoculation involves injecting a person with live disease; in this case, smallpox pus from someone with the disease. This gives the person a mild, survivable case of the disease, which, after they have recovered, will render them immune from further infection. Vaccination is the injection of a harmless form of a disease in order to stimulate an immune response in the event of future infection.

Around the year 1716, Cotton Mather, who was infamous for his involvement in the Salem witch trials, came across a scientific journal article about inoculation that was being practiced in Constantinople, Coss says. Not long after that, Mather asked Onesimus, a slave who worked in his house, about an unusual scar on his arm. Onesimus explained to Mather that the scar was from an incision made when he had been inoculated from smallpox as a young boy.

Mather began talking publicly about using inoculation against the smallpox epidemic. At first, no one thought it was a good idea, except for a doctor named Zabdiel Boylston, whom Mather convinced to conduct an experiment.

Boylston had grown up outside of Boston and had traveled the surrounding countryside with his father, who was also a doctor, interacting with Native Americans along the way. These experiences predisposed him to consider ideas outside of the mainstream, and he agreed to try out Mather’s suggestion.

The public outrage to Boylston’s experiment was enormous, Coss says. Both Boylston’s and Mather’s lives were threatened. In fact, at one point, someone threw a bomb through Mather's bedroom window.

At the same time, tensions were building in Boston with the British occupiers, and the smallpox epidemic exacerbated an already difficult relationship between the royal governor, who represented Britain, and the elected House of Representatives, which had been recently flexing its muscle. In fact, the political dysfunction was one of the reasons smallpox got out of control, Coss says. No one was able to work together to nip the epidemic in the bud.

Out of this brew of political conflict and disease emerged the beginnings of an American free press. In 1721, James Franklin, the older brother of Benjamin Franklin, started a newspaper called the New-England Courant, which would become the first independent newspaper in America. Franklin saw an opportunity in the epidemic and jumped in on the popular side of the debate, which was anti-inoculation. He also turned to other issues he was interested in, such as politics, social issues and humor, Coss says. He published the paper without permission from the royal authorities.

So, ironically, Coss notes, the birth of the free press in America is tied to an entrepreneur who went into business to prey on the fears of the public. At the same time, the Courant was also racy and funny. Benjamin Franklin made his debut as a writer in the newspaper under the name Silence Dogood.

“Silence Dogood wrote humorous articles that poked fun at Harvard, at prostitution, at drinking — all of this, mind you, in Puritan Boston in 1721,” Coss says. “You can draw a straight line from the Courant to things like the 'Daily Show,' or the 'Colbert Report,' or 'The Onion.'”

This all had a profound influence on Benjamin Franklin. “I say, only half-kidding, that in 1721, Ben Franklin learned everything he really needed to know,” Coss says, “because the experience of working with his brother in that town, at that period and with those challenges, really changed the way he thought about politics, the press and freedom of the press.”

Franklin observed Boylston’s medical experiment, which became important to him for a couple of reasons, Coss says. “One, it was the first real experiment that Benjamin Franklin, the great experimenter, had ever witnessed firsthand; and, two, it made Boylston a hero. Boylston, like Franklin, was a man of humble origins. He didn't have a Harvard College education, like most of the other doctors in town. He didn't come from a prominent family or a wealthy family. I think Ben Franklin walked away from this experience realizing the potential of his own life.”

In Philadelphia, Franklin became a huge proponent of inoculation — arguably the number one proponent of inoculation in all of the Colonies, Coss says, and Philadelphia became the center of inoculation. In fact, both of the men who advised George Washington, once he became commander in chief of the Army, were strongly pro-inoculation. In 1777, George Washington made the daring decision to have all of his soldiers inoculated. Many historians believe that this was perhaps Washington’s greatest contribution as a general in the Revolution, Coss says.

Back in Boston, smallpox had a role in accelerating the political rebellion led by a man named Elisha Cooke Jr., whom Coss considers our “founding grandfather.”

“Elisha Cooke's party, which would become known as the Boston Caucus, came to fruition around 1721, and from 1721 to 1776 it was the mechanism and the infrastructure for the American Revolution,” Coss says. “At the same time, you’ve got James Franklin, who, for the first time in American history, is actually saying that the press ought to have a right to criticize the government. ... It was a very volatile time.”