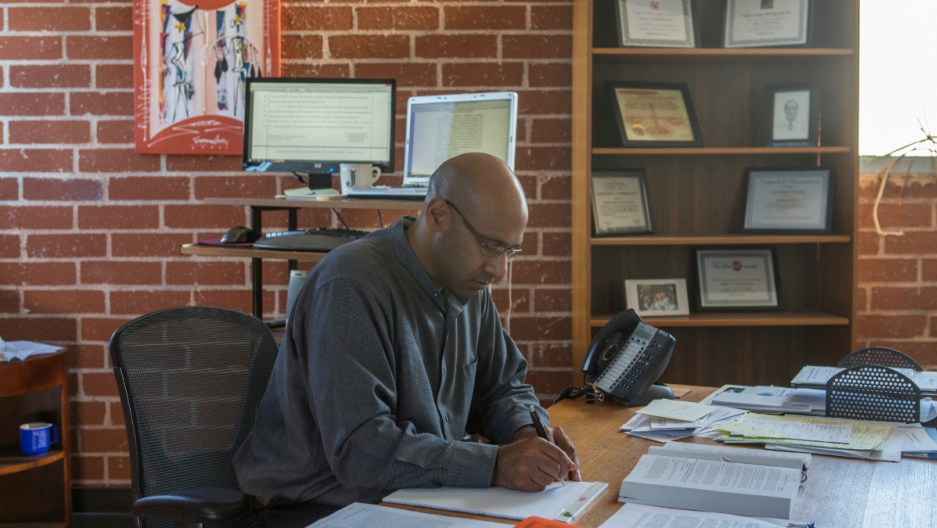 Ahilan Arulanantham is a 2016 MacArthur fellow.

Ahilan Arulanantham was filing papers for a case he was working on, to provide counsel for children facing deportation, when the MacArthur Foundation called him.

His phone rang three or four separate times before he picked up.

“It was a very busy day,” says Arulanantham. “I was just wondering who this pesky caller was.”

Arulanantham, the legal director at the ACLU of Southern California in Los Angeles, was awarded the grant for his work fighting for the rights of immigrant detainees. (Disclosure: The MacArthur Foundation also funds PRI.org reporting.)

He says his law career was influenced by his own family’s experience. He was born in the United States, but his parents are Sri Lankan Tamils, a group that’s been persecuted in Sri Lanka.

When he was 10, a civil war broke out in Sri Lanka. Many of Arulanantham’s relatives ended up moving in with his family.

“For several years, we had my cousins, my aunts and uncles, and then other people who were more distantly related, and then some who weren’t related at all,” says Arulanantham. “That was a formative experience for me. When I say, ‘I wish people could think about immigration problems just by putting themselves into the shoes of those who have to leave,’ I’m often thinking of my own family.”

More: A New York City program is providing lawyers for all immigrants in deportation hearings.

Arulanantham says the case he is most proud of involved a Sri Lankan Tamil refugee who shares his first name, “Ahilan.” He was labeled a national security threat because of a “factual mistake” and kept in an immigration center for four and a half years, from 2001 to 2006.

Now Ahilan is a US citizen, married with a child and lives in California.

Arulanantham still kind of smiles when talking about that case.

Somewhat ironically, Arulanantham lost the case that he was filing paperwork for when the MacArthur Foundation called him.

It was a case on behalf of children in deportation proceedings, arguing that because a government pays a prosecutor in every case, the government should also pay a defense lawyer. His clients included young teens and even a 3-year-old.

Related: Without lawyers, 90% of children crossing into the US alone seeking safety could be sent back

An appellate court ruled that the case could not be brought as a class action.

Arulanantham feels honored to have won the MacArthur grant. But he is not really sure he deserves the 'genius' title that goes along with it.

“It doesn’t take a genius to figure out that if you have a 10-year-old child in a courtroom against a trained prosecutor, if you want to give the child a fair hearing, you should probably give them a lawyer,” he says.

“Or if you’re going to lock someone up for three or four years, you should probably have a hearing in front of a judge to decide if that’s really necessary."