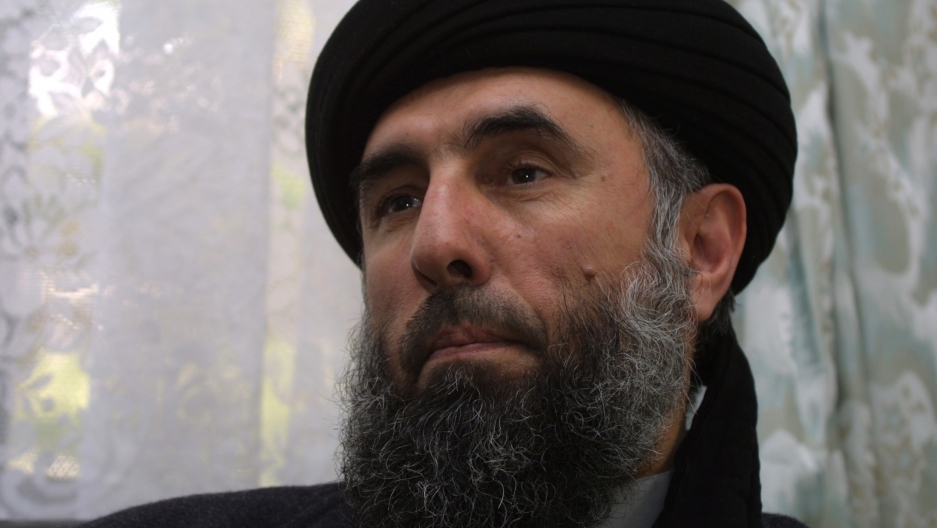 The Afghan government has reached a peace deal with one its oldest enemies: Gulbuddin Hekmatyar and his Hezb-e-Islami group.

But Hekmatyar’s name is one that brings terror to many Afghans.

“His name, to me, means: blood,” says Qais Akbar Omar, author of "A Fort of Nine Towers: An Afghan Family Story."

“Blood. Dead bodies on the street. Body parts. Destruction of all the buildings in my neighborhood,” says Omar, “and the sound of rockets and the sound of bombs that he dropped on Kabul almost every day from 1992 to 1996.”

In those years, Hekmatyar earned the nickname the "Butcher of Kabul."

“Whenever I hear his name,” Omar continues, “I start sweating. I get kind of warm, like, heat rising all over my body. And it’s a really horrible feeling, because I remember all the days that we were trapped in the basement of our house, 50 or 55 members of my family.”

Before the Taliban came to dominate Afghanistan, there was a prolonged civil war. Those factions who had fought against the Soviets could not agree how to share power, and that led to violent conflict almost immediately after the collapse of the Communist regime in 1992.

Omar was 19. He says the worst part of life in those days were the ceasefires, when you came out of your shelter and could see the devastation and carnage.

He was troubled by the images for years, and they were one reason he wrote his book — as a kind of therapy.

“I can say with ease there are millions of Afghans with the same image of Gulbuddin,” Omar says.

In the 1980s, during the war against the Soviet occupation of Afghanistan, Hekmatyar was the biggest recipient of aid from the CIA.

“He was definitely very good at portraying himself as an important commander and fighter,” says Dan De Luce, chief security correspondent for Foreign Policy magazine.

Pakistan and Saudi Arabia were other big allies. Hekmatyar became associated with a Saudi man seeking to set up a group of foreign volunteers looking to join the jihad — a man names Osama bin Laden.

Despite receiving massive international aid, historians agree that Hekmatyar was not an effectual guerrilla commander. He did not score a single significant victory over the Soviets, unlike his archrival, Ahmed Shah Massood. Hekmatyar spent more time attacking his nominal allies, to weaken them, while conserving his own forces as much as possible for the postwar power vacuum.

He established a reputation for ruthlessness early on, killing and torturing his opponents, critics and journalists, including foreign reporters whose stories he didn’t like.

He was militantly conservative and xenophobic. He is accused of sponsoring a campaign of throwing acid at women deemed immodest.

He was an early ally of the Taliban after they emerged in the mid-1990s. The relationship never thrived. But after the US invasion, in 2001, he joined the Taliban’s fight against the US presence.

“For the US military he is a villain,” De Luce says. “He is an enemy who is responsible, and his militants are responsible for a whole slew of attacks that wounded and killed many US and NATO soldiers over the past decade and a half.”

As recently as 2013, one of his suicide bombers killed six US troops in the Afghan capital.

But De Luce says his military power has weakened and that “he’s more a figure of the past.”

Under Thursday's deal, Hekmatyar gets a full pardon for all his alleged crimes. All of his supporters who have been captured over the years are being released from detention. He is also being granted a large safe area in the east of the country, and provided with cash believed to be worth millions of dollars.

Despite his personal feelings against Hekmatyar, Omar says, “I understand, or at least I try to convince myself that I understand, why the government of Afghanistan is trying to do this.”

He says the government has many enemies, and perhaps they’re hoping this will encourage the Taliban to make peace as well.

De Luce thinks that's unlikely, as the Taliban continues to make gains on the battlefield.

In exchange for the deal, the Pashtun warlord has promised to keep the peace and refrain from terrorism.

But there are no clear enforcement provisions, or any clear sanctions if Hekmatyar should break the deal.