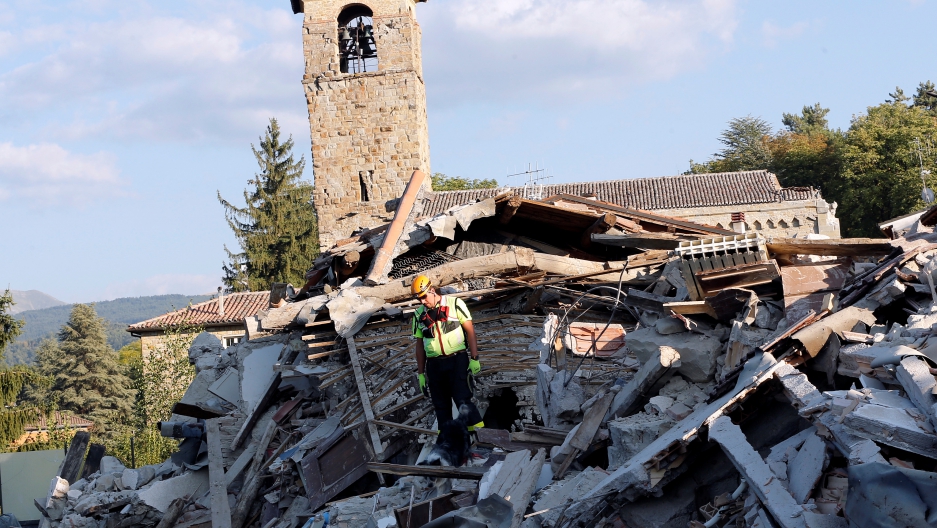 A rescue worker and a dog search among debris following an earthquake in Amatrice, central Italy, August 27, 2016.

The central Italian town of Amatrice is still a mess of toppled buildings and rubble. Buried there are centuries worth of art and artifacts.

More than 290 people died after a disastrous 6.2-magnitude earthquake hit the three villages of Amatrice, Accumoli and Arquata del Tronto on Aug. 24. "Three quarters of the town is not there anymore," Amatrice Mayor Sergio Pirozzi said. Thousands of residents are still homeless. The focus is now on helping the survivors — and on rebuilding the city.

At the same time, though, a special rescue effort is underway to recover Amatrice's cultural heritage: the centuries-old paintings, art and religious objects in the town's damaged or collapsed churches, libraries and museums.

“In Amatrice, a lot of buildings came down — really came down. Churches: they have no roofs anymore," says Maria Elisabetta Prunas, a conservation specialist with the Institute for Conservation and Restoration, a technical branch of Italy's culture ministry that deals with restoration and conservation of works of art and cultural heritage. “That’s why we’re working here and trying to rescue all the historical artifacts that we can find and the paintings and all that means culture for us.” 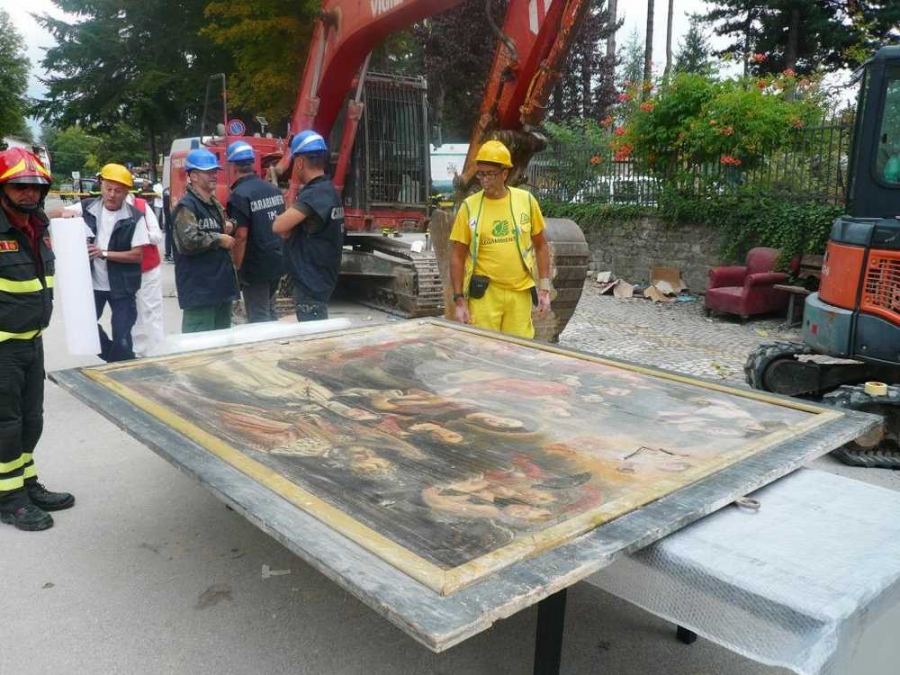 The task is enormous. The earthquake hit a town that’s famous for its "cento chiese": 100 churches filled with frescoes, mosaics and sculptures. The town museum, which contained collections of sacred art from the Middle Ages and early Renaissance period, was also badly damaged.

"The recovery of the cultural heritage of these extraordinary places is crucial to safeguard the identity and the economy of the communities who live there," Italian Culture Minister Dario Franceschini said. 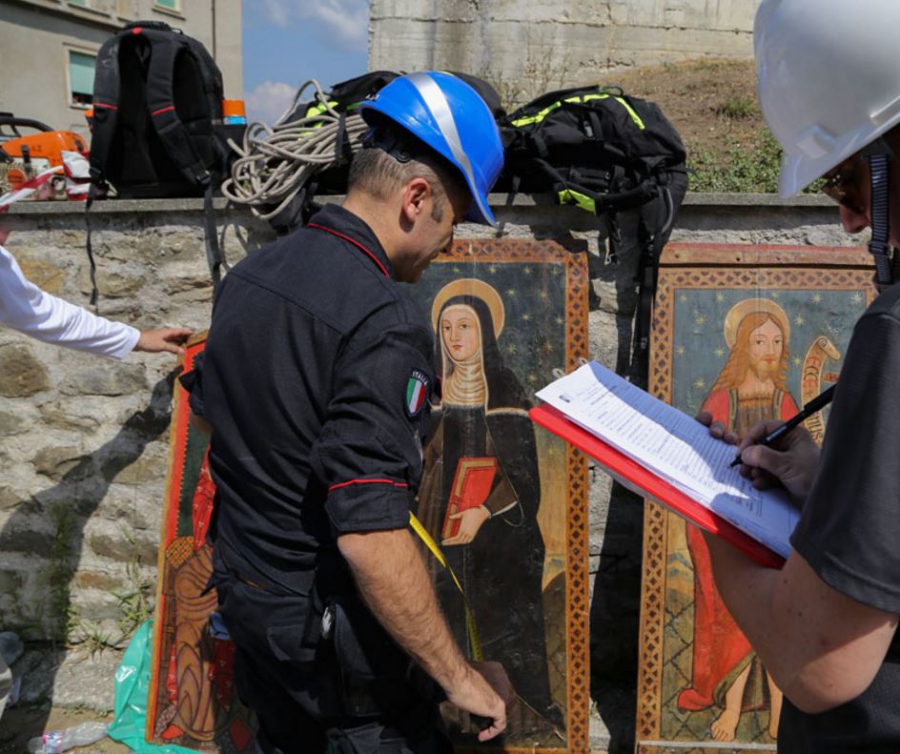 Prunas says many frescoes and wall murals have been damaged, but these are especially difficult to remove, so recovery teams are focusing on oil paintings and religious objects, such as statues and candlesticks. This week, they recovered some 16th-century church bells, for example.

They'll worry about the state of the objects later. For now, they're just trying to get them out.

"We cannot do the restoration work at the moment, we have just to rescue them because we have a lot of objects," Prunas says.

It's a group effort, involving not just the art historians and conservationists who are directing operations, but police and firefighters, too. And everyone has a particular role.

Typically, firefighters are the ones who collect the objects, since they have the skills necessary to enter earthquake-damaged buildings.

“They know how to go into the buildings, how to get inside and not to die," Prunas explains. "That’s the problem because most of the buildings have no roof anymore. It’s really very dangerous. I can’t go inside." 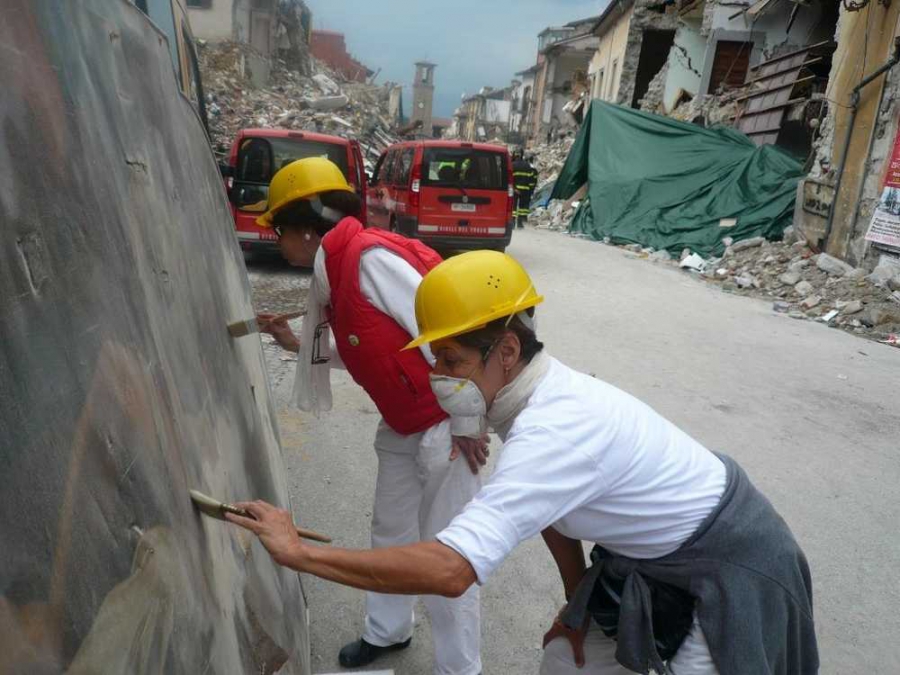 Art conservationists brush dust and debris off an oil painting identified as the Martyrdom of St. Lawrence that was rescued from the demolished church of St. Augustine in Amatrice.

Art historians and conservationists like Prunas coordinate the next step of the rescue operations: cataloguing and storing. “We make a photograph of them, a small record, and we wrap then in a proper way of course trying to keep all the pieces together,” Brunas says.

Italy’s special police force, the carabinieri, are on hand, too. They make sure nothing goes missing.

Much of Amatrice’s art and heritage has been lost or damaged beyond repair, Prunas admits, but “the aim is to try to recover the most we can.” 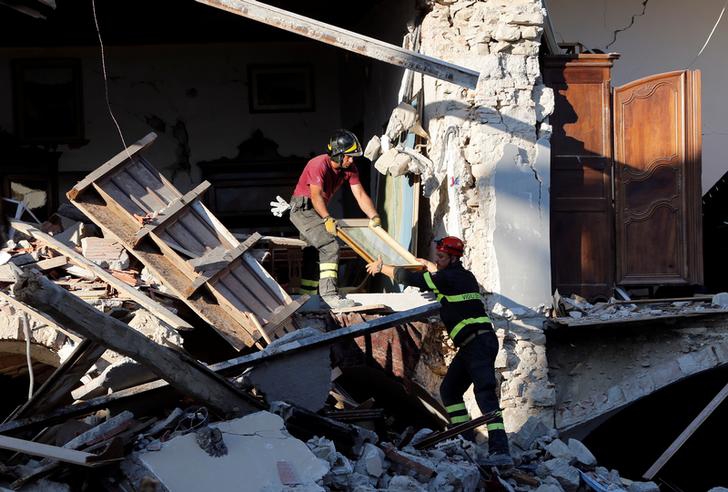 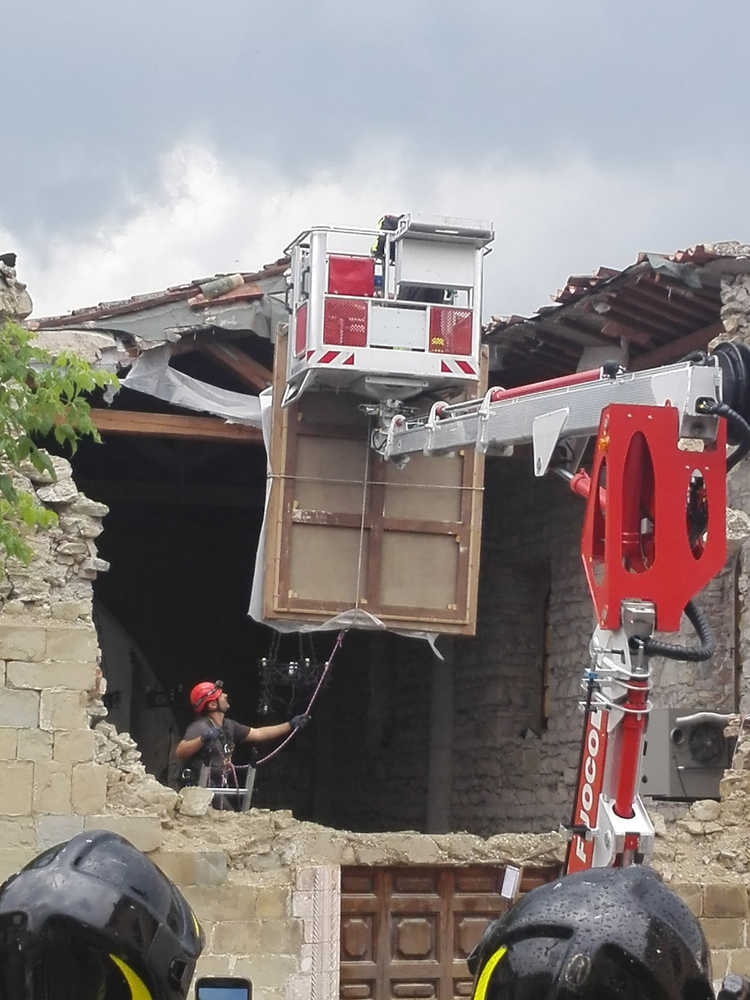 Firefighters use a hydraulic arm lift  from above to recover art works from the mostly collapsed church of St. Francis in Accumoli. Four oil paintings and a large altarpiece were successfully lifted out, including this 17th-century oil-on-canvas depicting the Ecstasy of St. Francis.