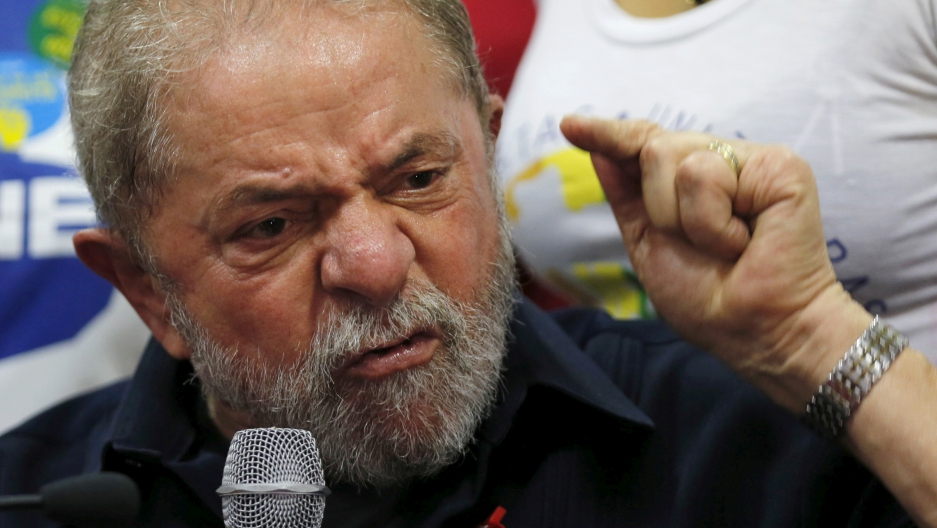 Former Brazilian President Luiz Inacio Lula da Silva speaks to the media after being detained for questioning in a federal investigation in Sao Paulo, Brazil, on March 4.
Credit:

It’s not just the polluted lakes that stink in Brazil.

There’s also a rotten smell coming from the halls of power in South America’s biggest country.

Just a couple of weeks after the controversial impeachment of President Dilma Rousseff, her predecessor, Luiz Inacio Lula da Silva, was charged this week with corruption and money laundering.

Lula, as everybody calls him, was Brazil’s president from 2003-2010. He left office with high approval ratings and remains probably the most beloved politician in the region. He would also be the front-runner for presidential elections in 2018 if he runs. Now he and former first lady Marisa Leticia Lula da Silva could face decades in prison.

Coming so soon after Rousseff’s Aug. 31 impeachment — which many in Brazil consider a power grab at best and a coup at worst — Lula’s indictment certainly smells fishy.

And it’s just one example of the political shenanigans of the last couple of weeks.

He hasn’t formally announced a run, but Lula leads the polls of potential presidential candidates in 2018. He remains wildly popular across much of Brazil, and he’s basically the last hope for the country’s once-almighty political left.

But if these charges stick, he won’t be able to run because, you know, he’ll be in jail.

Lula claims this is the real reason why he’s being prosecuted. He says he’s done nothing wrong, and that the case is just a tactic to stop him from returning to office.

Certainly at least some of the Brazilian public agrees with him. The news of Lula’s indictment triggered demonstrations across the country. And protests over the ouster of Lula’s closest ally, Rousseff, have also been flaring up for weeks.

Lula is going public with his fight.

“I would never embarrass you by stealing one real [about 31 cents] from this country,” Lula told a crowd in the city of Fortaleza on Thursday morning. “A group of young prosecutors has investigated my life for two years but could only say ‘We have no proof, but we are convinced.’ If you want to accuse me, show me some proof.”

2. The scale of the accusations

Lula and his wife are accused of receiving renovations to a luxury oceanfront apartment in Guaruja, a town outside the city of Sao Paulo, as a bribe from engineering company OAS. The ex-president acknowledges having visited the penthouse but says he doesn’t own it.

In announcing the charges last week, prosecutors claimed Lula was the “kingpin” of the huge “Operation Car Wash” scandal and that he orchestrated a bribery network worth billions of dollars to help companies win contracts with the state oil company, Petrobras. They made the case for throwing the country’s former president in prison in a splashy presentation broadcast on live TV.

After considering the case, Judge Sergio Moro said the “facts and evidence are enough” to open a case against Lula and his wife.

But the actual charges against the former leader are far more modest than last week’s shocking “kingpin” allegation: Lula and his wife are accused of personally receiving the equivalent of about $1.1 million from OAS.

That simply seems like small potatoes, considering the billions in bribes prosecutors accuse him of orchestrating, not to mention the scale of cases against so many other Brazilian politicians. For example, conservative politician Eduardo Cunha is accused of stashing tens of millions in bribe money into Swiss bank accounts.

That’s raised questions about whether the prosecution is more about politics than justice.

“This is more political than juridical,” Podval added. “They say Lula’s the leader of Car Wash, but all they say they can prove is that he got some apartment upgrades, a new kitchen. It’s very disproportionate.”

Prosecutors could still reveal new proof and new charges against Lula in the coming weeks. But, as Lula noted, they’ve been investigating him for years and home improvements to a beachfront apartment is all they’ve managed to formally accuse him of.

This is also far from the first time Lula has been in hot water. Several of his closest political allies have already been jailed for corruption. Whatever happens, says Paulo Sotero of the Brazil Institute at the Woodrow Wilson Center, the former president will have trouble surviving this latest challenge to his credibility.

“Most likely, his career is over,” Sotero said. “It’s not a fiction that Petrobras was assaulted and some of the witnesses say allegedly that he ordered it.”

3. A judge accused of playing politics

Judge Moro has become a famous “corruption buster” in Brazil, but he is also criticized for playing political games.

In March, Moro released wiretapped calls between Lula and Dilma to the press. In the recordings Dilma could be heard offering Lula a cabinet position “in case of necessity.” Some observers claimed the tapes showed Lula arranging a political appointment in order to enjoy the significant immunity government ministers enjoy from criminal prosecution.

In the brouhaha that ensued, a federal judge blocked the appointment.

Moro’s squeaky-clean reputation took a beating for a move that some experts even labeled as illegal. He later acknowledged that leaking the tapes was a mistake.

4. Sneaking in a vote to protect politicos

Lula’s case comes as lawmakers in Brasilia are struggling to cope with the scale of investigations into them. A majority of legislators face criminal investigations or charges, mostly related to corruption.

Less than 24 hours before Lula was indicted, they were hard at work trying to protect themselves.

On Monday night, House of Deputies legislators made a last-minute attempt to vote on a bill that would grant them retroactive immunity from prosecution for illegally receiving secret cash from individuals and corporations.

The vote didn’t go ahead, thanks to vocal opposition from two minor parties.

But it is yet another embarrassment for the fledgling government of Michel Temer, who replaced Rousseff as president, and for his party’s center-right coalition, which controls the House.

“They clearly know how slimy and corrupt this was,” says an eviscerating article on the website The Intercept about the attempt to vote on what it called the “sleazy” amnesty bill.

A mere two days after impeaching Rousseff, the same senators voted to legalize the very budget tricks they accused her of playing.

That means her successor, Temer, can do the same things she did. Only he won’t get into trouble for it.