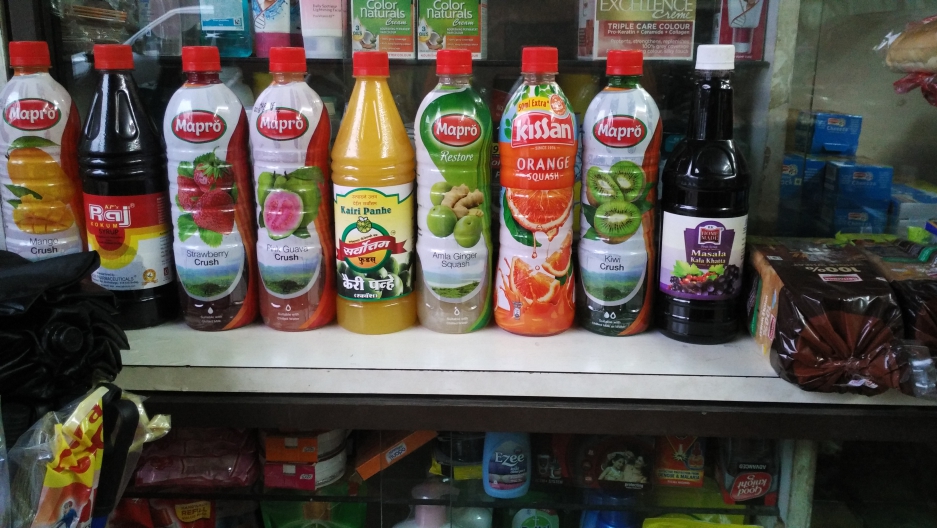 Reporter Chhavi Sachdev says drinking squash helps her reconnect to summers that were.

If you don’t live in England or a former colony, you probably don’t know squash.

Not the kind you play, or the kind you pick, but the kind you drink: squash, the fruity concentrated beverage. Just add water, ice and stir. It’s like Kool-Aid or Tang but in liquid form, since it’s fruit juice preserved with loads of sugar.

And in India, where I grew up, most households in the '70s and '80s always had a bottle or two in the pantry.

Then, in the early '90s, Coke and Pepsi entered the Indian market and took over. We drank it because we wanted to be hip, like American teenagers. Quaint squash was for squares.

It’s been years since I even thought about squash, so it was with some surprise that I walked into my local convenience store in Mumbai and found the shopkeeper restocking bottles of the stuff by the entrance.

Squash seems to have made a comeback.

“It used to be the basics,” Paresh Ji, the store owner, tells me. Orange, lemon, mango. “Now, it’s Indian fruits like amla and kokum, as well as guava, lychee, pineapple, ginger, ginger and lemon.”

I’m bowled over by all the choices.

In my childhood, we had limited options — in everything. We had one radio station, one TV channel, four kinds of toothpaste and only a few Indian-made sodas. They weren't expensive, but for a middle-income family like ours they were reserved as special treats, like for a birthday or picnic.

My mother, like many others, made her own butter, set her own yogurt, pickled vegetables, preserved fruit and made her own squash.

She’d buy oranges at the wholesale market and juice them. The rinds and pulp went for marmalade, while a small hill of gleaming white sugar crystals would join the juice to simmer. When it had cooled, she would bottle it and store it. And then when it was hot out and we’d come back overheated from playing gully cricket or hide and seek, we’d get a glass of orange squash: tart, sweet and deliciously cold.

Paresh Ji confirms my suspicions. A slightly older generation buys squash, he says. Maybe it’s nostalgia. Maybe it’s habit. Or maybe it’s that for just 135 Rupees — about $2 — you can get 15 glasses of squash, or four bottles of Coke.

I had stopped at the shop to pick up snacks to take to a friend’s lunch. On impulse, I bought that bottle of orange squash and took it with me.

It was almost as much fun to present the bottle as it was to drink it.

Neither of my gal pals had drunk squash in maybe three decades. I must have been 11 years old when I last had it.

We got out some glasses and ice, unscrewed the top from the colorful plastic bottle (which used to be glass, we remembered), and poured out half an inch of violently orange concentrate. We added water to the rim and stirred. The color made us all afraid it would be too sweet, but a taste test confirmed that it could actually stand some more syrup.

A splash more squash, another taste test, this time affirmative. The three of us stood barefoot in the kitchen and toasted our childhood.

And it was sweet. But also tart. And shockingly tasty.

In fact, it was loads better than any of us remembered. One friend she’d be happy to drink it as a mixer with vodka. The other said she might buy a bottle to serve to people when they came over.

And true to her word, I was offered some when I went to visit her last week. I quickly accepted, and took a few moments to silently savor this reconnection to bygone summers.

I guess the novelty hasn’t worn off.