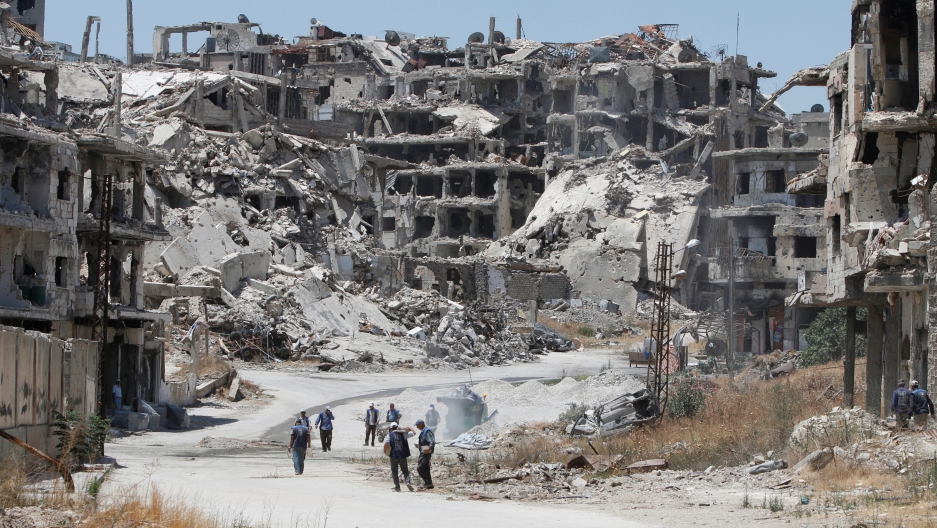 Workers collect material to be recycled and reused for reconstruction, under the supervision of the United Nations Development Programme in government-controlled Homs, Syria.

Row upon row of collapsed concrete apartment buildings — this seems to be one of the most common images of the destruction caused by Syria's war.

It's what the streets look like in Homs, a city in western Syria where Marwa al-Sabouni lives.

She's a young architect, born and raised there. And she's done a lot of thinking about the buildings Syrians live in, and how architecture might have fueled the civil war.

Al-Sabouni has a new vision: She wants Homs to reclaim the architectural elements of its ancient city center that helped hold a diverse society together for centuries.

She details how this would work in her new book "The Battle for Home" and an accompanying TED talk.

"You'd have mixtures of different backgrounds and different religions," she says. "The poor and the rich will enjoy the same features to their buildings and they will live next to each other as the Muslim and Christians did, for example, where even the mosque is near the church."

In centuries past, Homs architecture insured that residents from different backgrounds met on a daily basis and came to share a civic code, according to al-Sabouni.

That coexistence began to break down with the advent of colonialism in 1918. France was the colonial power in Syria until independence in 1946.

Travel from the center of Homs and you'll quickly find, according to al-Sabouni, "monolith blocks of three to four floors — featureless blocks mostly residential, dislocating people from the city and from each other, where people were just categorized in each area according to their class, to their religion to their origins sometimes."

Before the civil war, now over 5 years old, Homs was well known for its religious diversity. Sunnis, Alawites and Christians lived in close proximity. Churches and mosques prospered in the same neighborhoods.

Homs was an opposition stronghold when Syria's civil war began in 2011. Syrian troops assaulted the city for three years, leaving much of it in ruin. In 2015 vanquished rebels abandoned the city.

Today, al-Sabouni says, Syria's government is taking initial steps to begin rebuilding the Old City in Homs with the help of the United Nations Development Program.

"This is the first major project I believe all over Syria where they are rebuilding a piece of the urban fabric," she says. Al-Sabouni worries that large development companies will take charge of the rebuild, ignoring the needs of the impoverished and overlooking important lessons about how architecture can build more cohesive societies.

"I hope," she says, "my voice and other voices will play a role in preventing this."