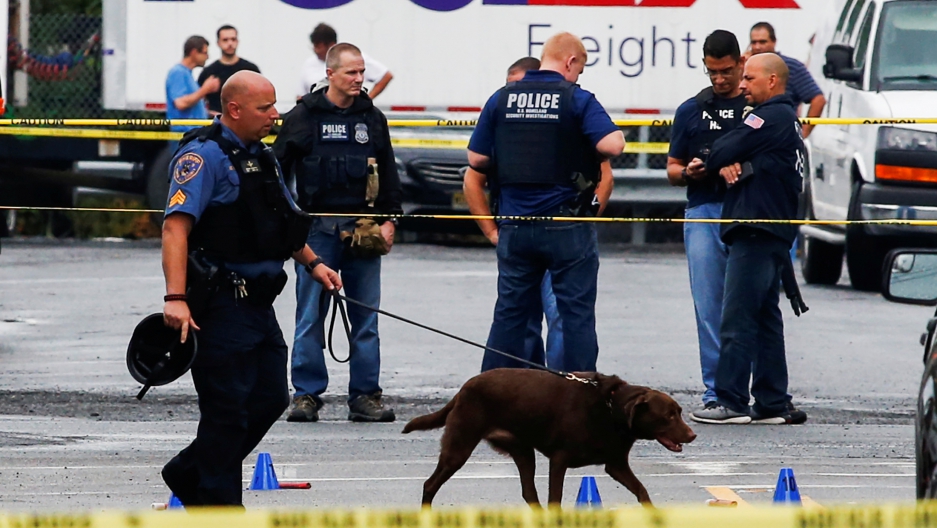 Law enforcement officers mark evidence near the site where Ahmad Khan Rahami, sought in connection with a bombing in New York, was taken into custody in Linden, New Jersey, September 19, 2016.

The FBI on Tuesday probed what could have motivated an individual to allegedly bomb New York's Chelsea neighborhood, scrutinizing his extensive travel to Afghanistan and Pakistan and work at the family restaurant.

Ahmad Khan Rahami, 28, was shot multiple times and captured during a shootout with police on Monday after being spotted in the doorway of a bar in Linden, New Jersey, just four hours after the FBI released his name and mugshot.

He underwent surgery and was in "critical but stable" condition, New York police chief James O'Neill said Tuesday, but has not yet been interrogated.

Agents are now analyzing eight unexploded bombs recovered from Manhattan and New Jersey, fingerprints, DNA and a notebook, which was reportedly found on his person and contained writings about al-Qaeda.

The book, which had a bullet hole, included references to US-born al-Qaeda recruiter Anwar al-Awlaki, who was killed in a US drone strike in Yemen in 2011, and the Tsarnaev brothers who carried out the 2013 Boston bombers, CNN reported.

"They're going to look at friends, family, go through all of his records, his social media, his phones and we'll see if he acted alone," O'Neill told CBS.

Investigators suspect that Rahami built 10 bombs, only two of which exploded — the one in Chelsea, which wounded 29 people, and a pipe bomb that forced the cancellation of a US Marine Corps run on the Jersey Shore on Saturday.

Two other pipe bombs in the New Jersey town of Seaside Park failed to detonate, as did a pressure cooker device in Chelsea, and five pipe bombs in a backpack at a trash can in his hometown of Elizabeth, New Jersey, which were defused safely on Monday.

Asked about reports that the suspect's father contacted law enforcement in 2014 warning that his son might be a terrorist, O'Neill told CNN that the FBI would "go through and see what they had on Rahami in the past."

"I think it's a good sign that he was found in a doorway. Hopefully that means he had nowhere to go," the police chief told CBS.

So far, a confused picture of Rahami has emerged. Officials say he travelled "extensively" in recent years to Afghanistan and Pakistan, where he married his wife, who then became pregnant.

Asked about reports that she left the United States shortly before the attack, O'Neill told CNN: "Anybody in his circle, we need to speak to. This is all an important part of figuring out why he did this."

So far no connection had been found between Rahami and militant groups such as the Taliban or ISIS, New York Governor Andrew Cuomo says.

He worked at the family's fried chicken restaurant, but The New York Times quoted friends as saying that he turned into a completely different person, who started praying and wore traditional clothes after returning from Afghanistan.

He also had brushes with the law. In 2012, he was accused of violating a restraining order, a New Jersey court official in Elizabeth told AFP.

In August 2014, he faced three charges, including aggravated assault with an attempt to cause bodily injury, and two unlawful weapons charges — in what officials say was a domestic incident.

While Rahami reportedly spent three months in custody, the court official confirmed that the case was subsequently dropped.

He reportedly fathered a child with his New Jersey high school girlfriend, who was quoted complaining that he failed to pay child support.