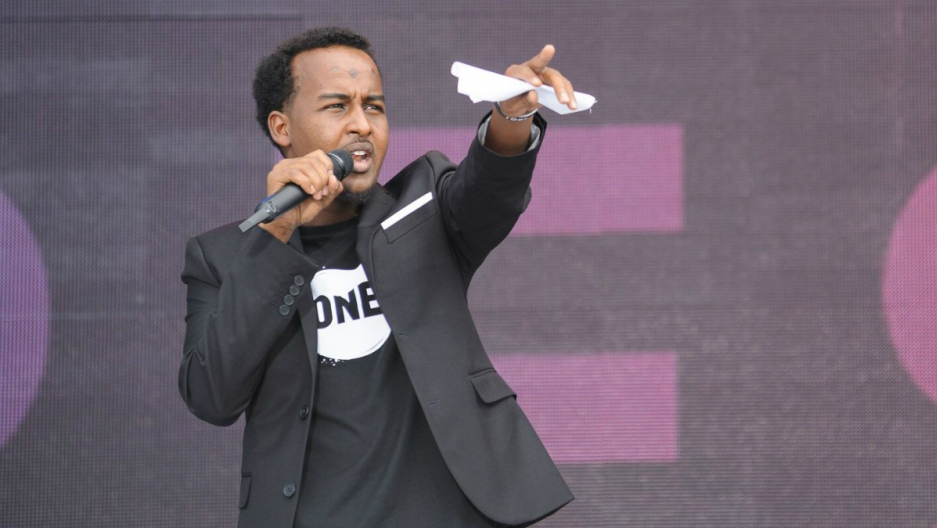 Suud Olat is a refugee advocate in St. Cloud, Minnesota. “Eventually, we may reach the goal that people see us as other, fellow Americans. But not a threat or someone who wants to kill you or hurt you," he says.

The FBI is investigating a stabbing spree at a mall, in St. Cloud, Minnesota, as a "potential act of terrorism."

Ten people were injured in the attack, while the attacker was fatally shot by an off-duty police officer. ISIS claimed responsibility for the violence, but FBI agents have not confirmed any links to terrorist organizations.

The attacker was 22-year-old Dahir Adan. People who knew him say he was brought to the US as a child.

Now, some immigrants from Somalia living in St. Cloud, which is home to a large Somali community, fear there will be an unwarranted backlash. Especially because tensions were already high in the community.

Last year, for example, students at St. Cloud Technical High School walked out of their classes to protest discrimination. Parents and students chronicled acts of everyday harrassment and bullying.

Now, some fear things could get worse.

“It’s a really, really scary moment for the Somali community,’’ says Suud Olat, an activist who lives St. Cloud. He arrived in the US as a Somali refugee and grew up for the most part in Kenya refugee camp.

Olat says the local madrasas, reiligious Sunday schools, closed after the attack. A teacher told him that they were worried the children would be hurt.

The attacks have been the topic of discussion from coffee shops to college campuses, says Olat. “People [are] thinking, “Oh my God, without nothing happening, we’ve been feeling scared. We’ve been called names. You know, now, an incident [happened], what will happen?”

Jaylani Hussein, executive director of the Minnesota chapter of the Council on American-Islamic Relations, spoke shortly after the attack to condemn the violence and discourage retaliation against innocent people.

"We are all shocked just like you. And we are all grieving just like you. This is an act of an individual and we want our community to realize this fact," he told reporters. "We hope from this tragedy we can build a better, stronger community here. A strong St. Cloud that is inclusive and welcoming for all people."

Olat's friends, though, have already had bad experiences. One friend said that, while driving, a man passed by, rolled down his window and gave him the middle finger.

Osman Mohamed Ali is the founder and executive director of the Somali Museum of Minnesota in nearby Minneapolis.

Ali is loath to talk about negative portrayals of Somalis in his neighborhood, though. He focuses instead on helping young Somali Americans learn about their culture. And helping Minnesotans learn about Somalis.

"Once you learn my culture and I learn your culture, there will be understanding between us," he says. The museum, which opened in 2009, has artifacts of Somali traditions and hosts activities such as weaving, language and traditional dance classes — there are more than 50 different traditional Somali dances, Ali says. "We don't like negativity, but we would like to work with anything that makes a positive image."

"We have a lot of young generation who are born and raised here in the United States, who don't know anything about their heritage and culture," he says. Most East Africans in Minnesota came to the US because they were fleeing wars. Ali works to recapture all the good things about the cultures and traditions they may have left behind.

Somalis, he says, were nomadic. Their culture has an ingrained humanitarianism, a call to help each other and their guests, or whoever may need a hand  "it's a cultural way and a religious way," Ali explains. He is proud of this "unique culture in the United States" and wants others to get to know the rich tradition of the roughly 25,000 Somalis living in Minnesota.

He is working against a tide of negativity, though. A recent study conducted by researchers at the University of Minnesota found that Muslims, the faith of many Somalis in Minnesota, are the most unpopular group in the US. CAIR says last year brought the highest number of attacks on mosques since the group began recording data in 2009. In Minneapolis, three young men were convicted of conspiracy to commit murder overseas and other charges after attempting to join ISIS.

Hussein, of CAIR Minnesota, says that there is a lot of fear among Muslims and the general public. St. Cloud has a history of problems to work through.

"There's a bit of a quiet right now. It's a community coming together and trying to figure things out on their own," he says.

Olat, who works as a refugee advocate, doesn't let the challenges of recent events deter him from trying to help get refugees to come to Minnesota.

Like Ali, he hopes to change how people in Minnesota view Somalis.

“We never give up,” he says. “Eventually, we may reach the goal that people see us as other, fellow Americans. But not a threat or someone who wants to kill you or hurt you."