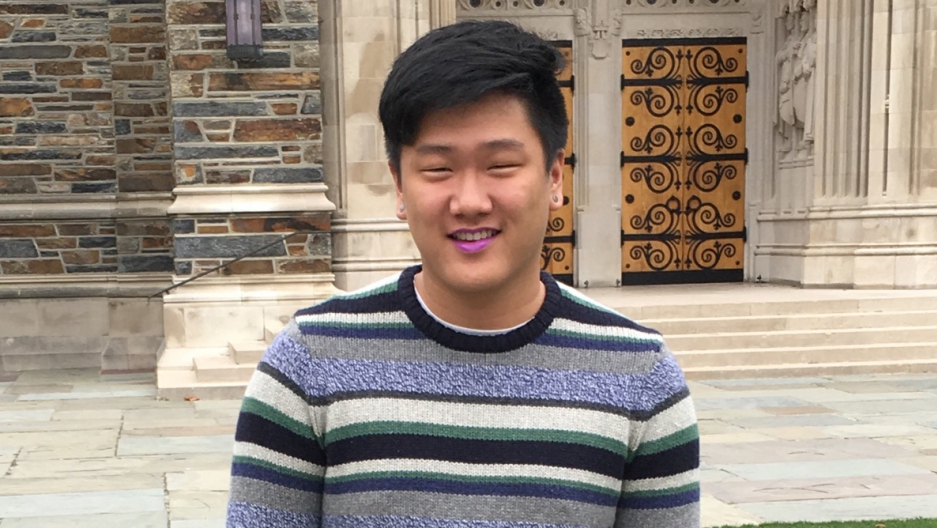 Ji-Ho Park on the Duke University campus. They identify as genderqueer and use gender-neutral pronouns.

This past February I was invited to give a lecture at a Duke seminar called “LGBTQ Activism and History.”

I arrived a bit late, and each of the dozen or so students had already filled out a name card, a folded piece of paper that indicated their full name and pronouns. I was puzzled for two reasons: First, why state your pronouns? Isn’t it pretty obvious who’s a man and who’s a woman, who gets “he” versus “she”? Second: Two of the students had written, “they, them, their.”

I followed suit, scribbling: “Steven. He, him, his.”

As it turned out, the pair of undergrads had chosen gender-neutral pronouns, often used by those who identify as “non-binary” or “genderqueer” (both of which come under the transgender umbrella). One of the students was Ji-Ho Park, a chemistry major who graduated this past May. Park explained to me that they do not identify as either a man or a woman, which is why they use gender-neutral pronouns. (Many news outlets, including The Washington Post and PRI, now use the pronoun that an individual requests, signaling both acceptance and respect.)

Language matters because, as Park told me, “the development of vocabulary is crucial to understanding.”

I’ll admit all this seems newish and complicated to me. It was only a few months ago that a neighbor’s teenage daughter explained to their parents and friends that they identified as “pan-sexual” (which is defined as the sexual attraction to a person of any sex — male or female — or gender — masculine, feminine or somewhere in between). Now the request was for all of us to use gender-neutral pronouns. We tried but flubbed it, until finally the 13-year-old exclaimed, “Please respect my pronouns” — and the light went on.

In this edition of The Civilist, Steven talks with Justin Vivian Bond, an entertainer and transgender advocate, about gender-neutral pronouns and the new honorific, "Mx."
Subscribe to The Civilist

Of course, language is about communication, but it’s also about showing respect. That’s why we use titles like “Dr.” or “Professor” or “Mr.” and “Ms.” That’s why we call the one-time-Olympian Caitlyn Jenner now — that’s her legal name. That’s also why we address a woman who keeps her birth name after marriage by that name and not her spouse’s (and vice versa).

This change in pronouns, however, upsets a lot of people, especially those with strong feelings about what I like to call “The Incontrovertible Rules of English.” To be honest, my inner Strunk and White struggled at first with this evolution of the language: “They” is plural, right?

While purists object that a plural pronoun like “they” can’t be used as a singular, linguists point to the example of “you” as a pronoun that has been both singular and plural in common usage: “You” began its life as plural (the singular second person was “thou”) and then began serving as singular as well. Today we use “you” to mean a single person (“are you talkin’ to me?”) or a group (“you may take your seats”). If “you” can be either singular or plural, why not “they”?

Of course, in the South we all know that the plural of “you” is “y’all.”

More: Listen to The World in Words podcast about gender-neutral pronouns.

To this debate, a friend of mine noted snarkily: “People need to follow the rules of grammar. You just can’t toss them on a whim!” It was not whimsy back in the 1970s, though, when “Ms.” was introduced as an alternative to “Miss” and “Mrs.” Despite vociferous opposition by linguists, journalists, and traditionalists, this new title caught on because it obviated the need to identify a woman by her marital status. Ditto now for a person’s gender identity.

Which is how I came to understand that the evolution of language should be accepted, even when not fully understood, and respected. Both Ji-Ho Park and my neighbor are not pronouns, but people. And if they want me to refer to them with a gender-neutral pronoun, I will do my best. Y’all should, too.