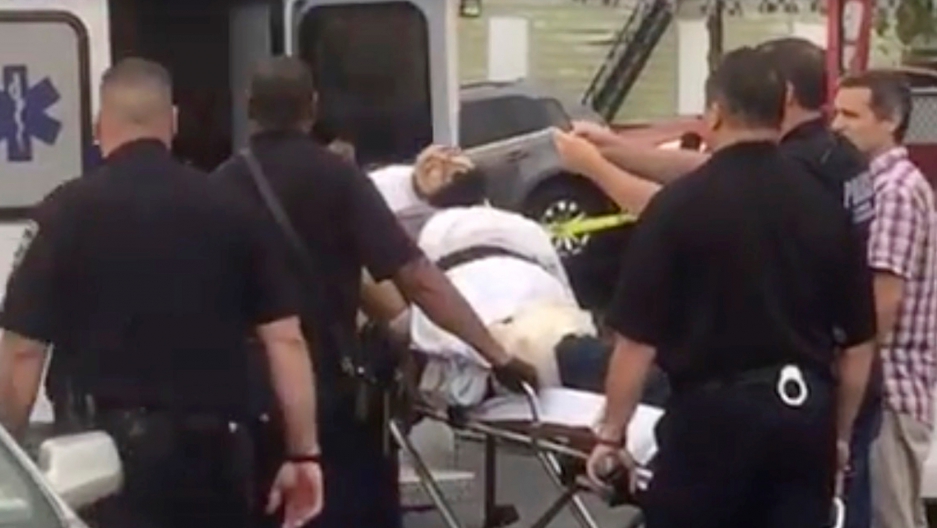 A policeman takes a photo of a man they identify as Ahmad Khan Rahami, who is wanted for questioning in connection with an explosion in New York City, as he is placed into an ambulance in Linden, New Jersey, in this still image taken from video.

Police in New Jersey arrested a man on Monday after a shootout, which left the suspect and a police officer with gunshot wounds.

The man — identified as 28-year-old Ahmad Khan Rahami — was wanted by police in connection with four bomb incidents in New York and New Jersey over the weekend.

One of those bombs caused injuries, with 29 people wounded in Manhattan's Chelsea neighborhood on Saturday night. All have been released from the hospital, none with serious injuries.

Rahami is the only suspect in all four incidents.

Juliette Kayyem, a counterterrorism expert and former Homeland Security official, says it’s too soon to know if the incidents are connected to international terror.

Kayyem praised the authorities in New York and New Jersey for “crowd-sourcing” the investigation. A text message with Rahami’s name went out to every resident of the metropolitan area.

“While the enemy is more nimble and harder to find, in many ways we should give at least some credit to a more nimble counterterrorism apparatus as well,” she says.

The attacker's success rate was not very high. He had at least eight devices, and only one caused injuries. Five explosives were at one location, and one of those went off while being disarmed by a bomb squad robot.

“What we’re finding is the radicalization process for these men is so short,” Kayyem says. “We say the runway is very short. That makes it more difficult for us to find them before they do something. On the other hand, it means they might be more sloppy. They don’t have the training. They’re making bombs that don’t detonate.”