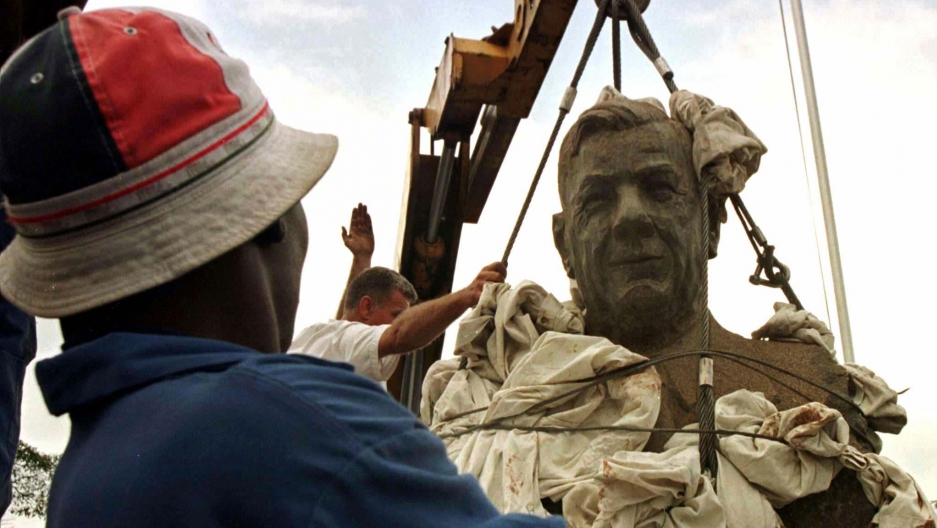 A man watches the bust of Hendrik Verwoerd, the architect of apartheid in South Africa, being removed from the entrance of Pretoria's main hospital named after him.

On the afternoon of September 6, 1966, Prime Minister H.F. Verwoerd, the "Architect of Apartheid" in the country, sat before the all-white parliament of South Africa. With his white hair swept neatly to one side, he held himself with confidence.

Verwoerd, 64, was the proud Afrikaner who set in stone the segregation of South Africa. He listened as bells called his fellow legislators to the chamber.

It was a day South Africans would remember for decades to come.

At a quarter-past-two, a parliamentary messenger suddenly rushed into the room. In his official uniform, he must have gone largely unnoticed. But then the messenger — later described as “a tall, powerful, gray-haired man in his late 40s” — produced a knife and stabbed Verwoerd four times in the chest and neck.

The prime minister slumped forward, blood pouring from his body. By the time Verwoerd's colleagues had pinned down the assassin — a mentally ill half-Greek, half-black man named Dimitri Tsafendas — the carpet was stained with blood. Verwoerd was dead before he reached a hospital.

His funeral ceremony was attended by a quarter-million South Africans, the vast majority of whom were white. The architect was dead, but his policies were not; the system that Verwoerd helped to establish would continue to subjugate black South Africans for more than two additional decades.

In the 50 years that have passed since Verwoerd was assassinated, his reputation as a hero of white South Africa has eroded so thoroughly that he now symbolizes — even epitomizes — racism and brutality.

His assassin, meanwhile, remains an enigma — a man whom some condemn, some celebrate and some simply ignore. Declared mentally unfit for trial, in part because he spoke bizarrely about a tapeworm that supposedly directed his actions, Tsafendas would end up outliving apartheid, but he would die behind bars as South Africa's longest-serving prisoner.

To trace the legacy of both men today is to trace fault lines that still cut through South African society.