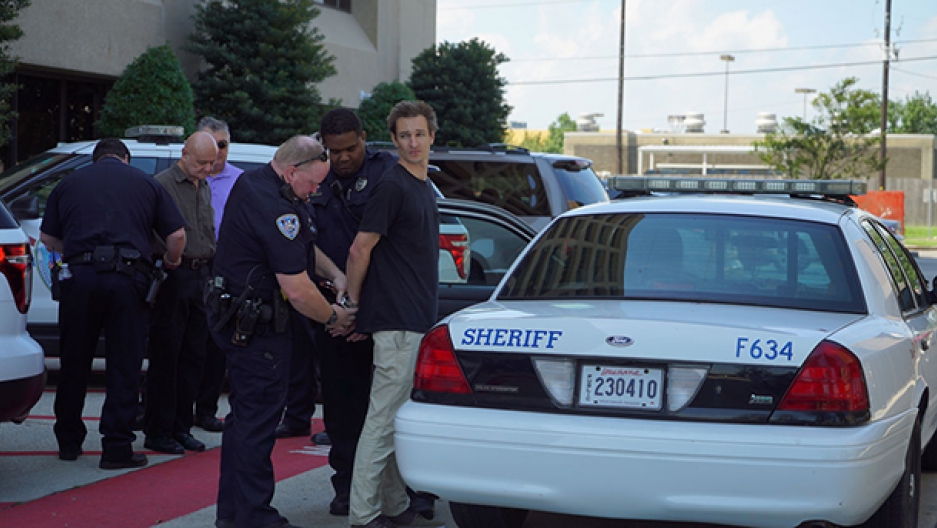 Blake Kopcho, right, and John Clark, left, were arrested along with two other protestors at the Bureau of Ocean Energy Management (BOEM) office in New Orleans, Louisiana.

A band of protesters in New Orleans recently tried to block the government auction of oil leases in the Gulf of Mexico. They failed to stop the event, but it turned out the auction was a flop anyway.

The Bureau of Ocean Energy Management refused to cancel the sale of leases, but only 24 out of 4,400 leases were actually taken up and a record low $18 million in revenue was offered.

The Louisiana Bucket Brigade held the sit-in and, although the auction went forward, the group's director, Anne Rolfes, says they got their message across.

“We carried the truth to the feet of the oil industry, which was that they are in large part responsible for the floods that devastated south Louisiana,” Rolfes says. “We brought mounds of flood debris, and made the point that continued oil drilling in our Gulf of Mexico, and all over the globe, causes floods like these.”

Climate scientists are increasingly certain that climate change, caused by the extraction and burning of fossil fuels, has led to the warmer ocean waters now being measured across the world. Warmer ocean temperatures lead to more water vapor in the air, which can result in unusually high rainfall amounts.

But why did the auction do so poorly? Oil companies are still in the business of selling oil, after all.

“The oil industry is in what they consider to be a slump," Rolfes says. "They've got infrastructure out in the Gulf that is absolutely falling apart. They are deciding not to repair that infrastructure. They have left, for example, 26,000 wells abandoned in the Gulf of Mexico. … The good news is that means bids like these are down.”

The Louisiana Bucket Brigade is one of the many organizations that are supporting the Keep It In The Ground movement. Recent extreme weather conditions around the world may be raising public awareness about this movement’s mission.

“Several months ago, in March, we sent 300 people into the auction and delivered a very clear message, which was that our Gulf was not for sale,” Rolfes says. “In response to that action in March, they've banned the public from these auctions of our Gulf of Mexico. I think that shows they're quite afraid of public opinion.”

Rolfes also notes that, when members of the Bucket Brigade went to the OEM offices several months, two armed guards greeted them.

“Something is really wrong when you have to start to arm people in order to pull natural resources out of the ground,” Rolfes says. “We certainly see this in other countries around the world, in places like Nigeria, where I worked for several years, but now it has come to Louisiana. It’s a new day. I think what's ahead is more of the same — that we will continue to defend our natural resources and our homes from an industry that really is a predator.”