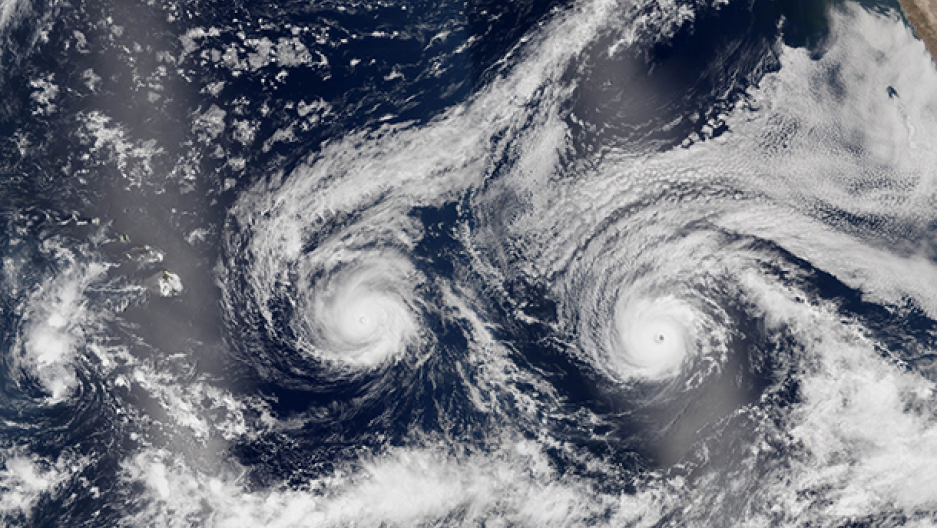 NASA Earth Observatory image of hurricanes Lester and Madeline taken August 29, 2016, when both storms were hovering between Category 3 and 4.

Familiar weather patterns are a thing of the past, and the U.S. may face more extremes in the coming decades, says a noted meteorologist.

“I don't recognize the climate anymore,” says Jeff Masters, the director of meteorology for Weather Underground. “I look at the weather maps in the morning, sometimes afraid of what I'm going to see. It's just gotten so insane. The climate of the 20th century is gone. The climate I knew is not here anymore. We're in an entirely new climate regime, and it is extremely intense.”

Climate scientists have been reluctant to attribute any one storm to the effects of climate disruption, but this may soon start to change. After historic rains fell on parts of Louisiana — an estimated 7.1 trillion gallons, three times as much as Hurricane Katrina — NOAA published a report which said that climate change made the storm at least 40 percent more likely today than a hundred years ago.

Louisiana is still recovering from that record flooding; Florida and Hawaii were both deluged by rain from recent hurricanes; and many states are reporting above-average or record summer rainfalls. And even as some regions are getting drenched, others are going dry, leading to yet another intense wildfire season that is incinerating forests from Alaska to Southern California.

It is unprecedented weather chaos, says Masters. The situation in the Pacific Ocean is particularly alarming.

Masters believes this is happening now because water temperatures in the Pacific have crossed a critical threshold. “It used to be the waters were not warm enough east of the Hawaiian islands to support a hurricane,” he says. “Now, just in the past two years, those waters are warm enough. That's due to a combination of natural patterns, which we call El Niño and the PDO, or Pacific Decadal Oscillation, and the overall ramp-up of global temperatures, which is causing warming of the oceans all over the world.”

In the Gulf of Mexico, summer water temperatures are near record levels, also, approaching 90 degrees Fahrenheit. “When you get that kind of supercharged water in the Gulf of Mexico, it makes for supercharged storms,” Masters says. “You get a lot of evaporation off the ocean. That means there's a lot of water vapor in the atmosphere which makes for intense downpours.”

“They extract heat energy from the ocean to convert it to the power of wind,” he explains. “The warmer the ocean is, the stronger a hurricane can get, if all other conditions that it needs to exist are present. So, hurricane scientists are confident that, as we continue to heat up the oceans, we're going to see more of these high-end perfect storms.”