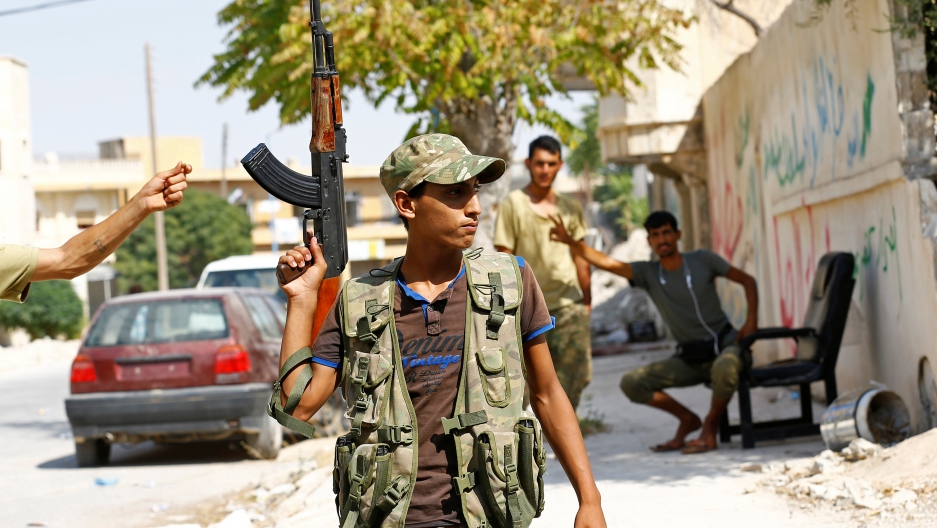 The United States doesn’t have many friends in the Middle East, and even the ones it does have don’t seem to like it very much.

That much was clear on Friday, when US special forces soldiers apparently had to withdraw from a Syrian town after protests by rebel fighters, whom the US troops were sent to support.

Videos posted online showed a number of pickup trucks, with what appeared to be American special forces inside, departing the town to a chorus of anti-US chants by fighters.

We weren't able to immediately verify the source of the videos, but rebel commanders reportedly confirmed the incident.

The protesting fighters were members of the Free Syrian Army, a broad coalition of rebel groups — some of whom have received US backing.

TR-backed FSA ask US forces out of Al-Rai, 1 says: "we won't accept any American here, we're Muslims, not infidels". pic.twitter.com/GOAxJ1QAVs

One fighter reportedly shouted: "We won't accept any American here, we're Muslims, not infidels." Others were heard threatening the US troops with violence.

A senior rebel commander told Reuters a small number of US special forces troops entered the town al-Rai, near the border with Turkey, on Friday to work with Turkish-backed Syrian rebels.

Five or six US military personnel were forced to withdraw toward Turkey, Reuters cited the commander saying.

The US has sent 40 special operations soldiers into northern Syria to coordinate with Turkish government forces and Syrian rebels in an operation to clear ISIS from the border, according to the Wall Street Journal (subscription-only page).

A spokesman for US Central Command told us they were looking into Friday's events.

The incident highlights the precariousness of the broad anti-ISIS coalition that includes the US, Turkey and an assortment of Syrian rebel groups.

Operation Euphrates Shield has been a headache for the US from the moment Turkey first sent its tanks into Syria in late August.

Washington had been pushing for more Turkish involvement in Syria for years. But Turkey launched the operation unilaterally, without giving the US prior warning, according to US officials cited by WSJ. Turkey even reportedly wanted to include allies of a rebel group founded by al-Qaeda, but the US vetoed that idea.

The rebel fighters backed by Turkey turned their immediate focus to pushing back Kurdish forces, which are also US allies.

It was US support for Syrian Kurdish fighters — whom Turkey considers terrorists — that apparently motivated the protests in al-Rai on Friday, according to Charles Lister, a senior fellow at the Middle East Institute, a think tank.

Lister tweeted about the event as it unfolded.

#pt: A dispute erupted when FSA fighters accused U.S. SOF of being pro-YPG = American personnel withdrew; some to #Turkey, some to Tathamus.

Lister later reported that US forces returned to al-Rai.

Syrian rebels, even those “friendly” to the US, have criticized the US for doing nothing to stop Syrian President Bashar al-Assad from bombing civilian areas, and for working with Russia, which joined the war on Assad’s side last year.

For the Kurds, the feeling is mutual. Kurdish commanders frequently refer to the Turkish-backed forces as “jihadists” and “extremists,” and accuse Turkey of backing ISIS.

Whether a blip or a sign of more tensions to come, Friday’s incident is a reminder that a shared military objective does not equal a friendship.

US volunteers with YPG not surprised by Syrian rebels kicking out US forces in Rai. Say it confirms that they are not moderate.

And if you don't understand or appreciate the extent of distrust or anger re US among Syrian rebels, then you have been asleep since 2011