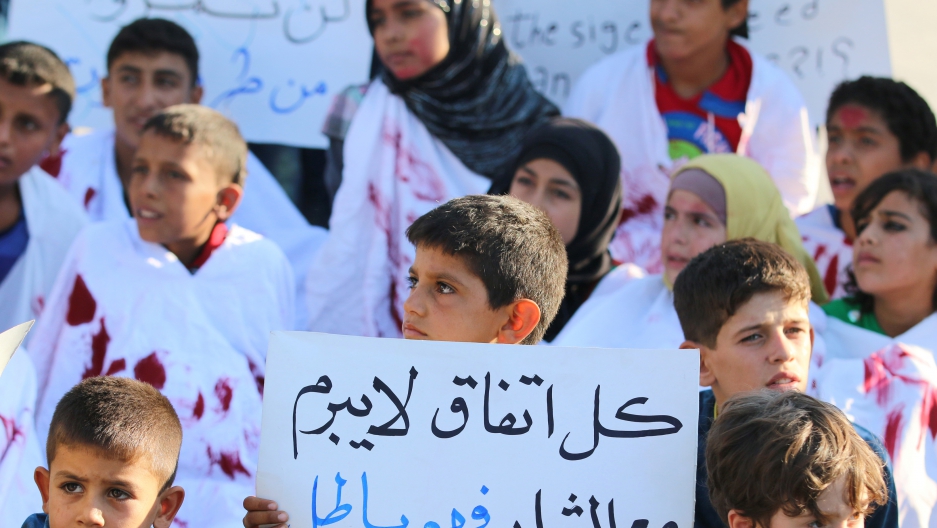 A boy carries a placard during a demonstration against forces loyal to Syria's President Bashar al-Assad and calling for aid to reach Aleppo near Castello road in Aleppo, Syria, on September 14, 2016. The placard reads in Arabic, "Every agreement which is not done with the rebels is void."

The United Nations urged Syria's government Thursday to allow immediate aid deliveries to hunger-stricken civilians, after a fragile ceasefire was extended for 48 hours by Russia and the United States.

In a sign of renewed tensions between the two powers, who back opposing sides in the conflict, key regime ally Moscow accused Washington of failing to meet its obligations under the truce.

The UN said 20 trucks loaded with aid had crossed into a buffer zone between Turkey and Syria, voicing hope the supplies could be delivered to besieged rebel-held districts of Aleppo on Friday.

"They've been waiting and sleeping at the border now for 48 hours. So they could go on a minute's notice," said Jan Egeland, head of the UN humanitarian task force for Syria.

The ceasefire deal calls for the demilitarization of the key Castello Road into the city, and Russia said on Thursday afternoon that Syrian armed forces were "fulfilling their obligations and have started a gradual withdrawal" from the route.

Washington said late Wednesday that US Secretary of State John Kerry and his Russian counterpart Sergei Lavrov had spoken and agreed to prolong the ceasefire which began on Monday.

But hours later Russian military spokesman Igor Konashenkov slammed the US for what he called "rhetorical fog" intended "to hide the fact that it is not fulfilling its part of the obligations."

"As of the third day (of the truce), only the Syrian army is observing the regime of silence. At the same time, the 'moderate opposition' led by the US is increasing the amount of attacks on residential districts," Konashenkov said. 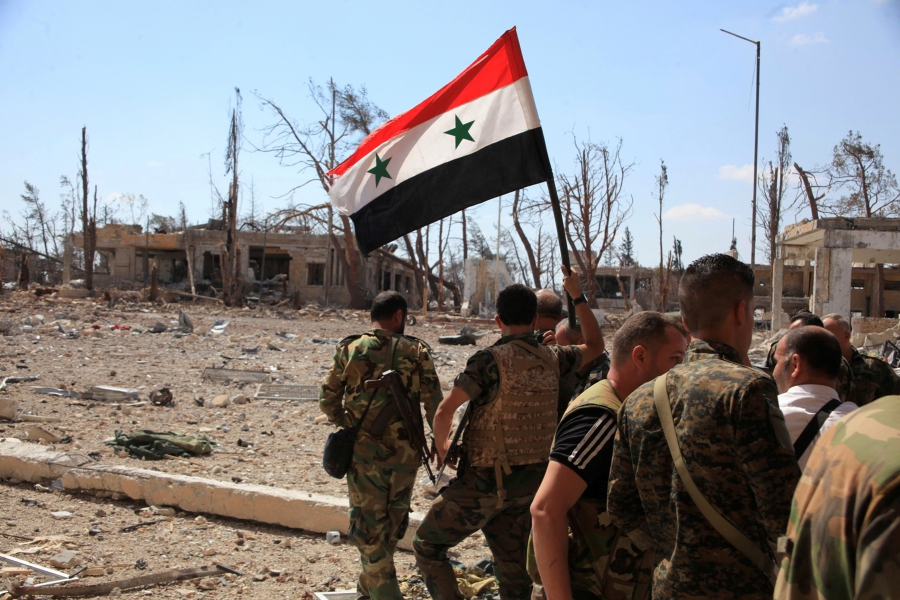 Forces loyal to Syria's President Bashar al-Assad walk at a military complex as one of them holds up a Syrian national flag, after they recaptured areas in southwestern Aleppo on Sunday that rebels had seized last month, Syria, in this handout picture provided by SANA on September 5, 2016.

'The clock is ticking'

The truce, agreed after marathon US-Russia talks in Geneva last week, is part of the latest bid to end a five-year conflict that has killed more than 300,000 people.

It aims to halt fighting between Syrian President Bashar al-Assad's forces and rebel factions, but does not include jihadists like ISIS.

The UN's Syria envoy Staffan de Mistura said Thursday that the truce was holding "by and large."

But promised authorization from Damascus for large-scale humanitarian convoys had not yet been received.

"This is something that is required to happen immediately," de Mistura told reporters in Geneva.

East Aleppo, where around 250,000 civilians are besieged by government forces, is a major concern for humanitarian organizations.

The ceasefire extension "provides us a critical window of opportunity to assist the people in need in east Aleppo," said David Swanson, a spokesman for the UN Office for the Coordination of Humanitarian Affairs.

"That being said, the clock is ticking and time is of the essence."

Forty trucks carrying food for 80,000 people were at the Syrian-Turkish border waiting for the green light to go to Aleppo about 44 miles away, said Swanson. 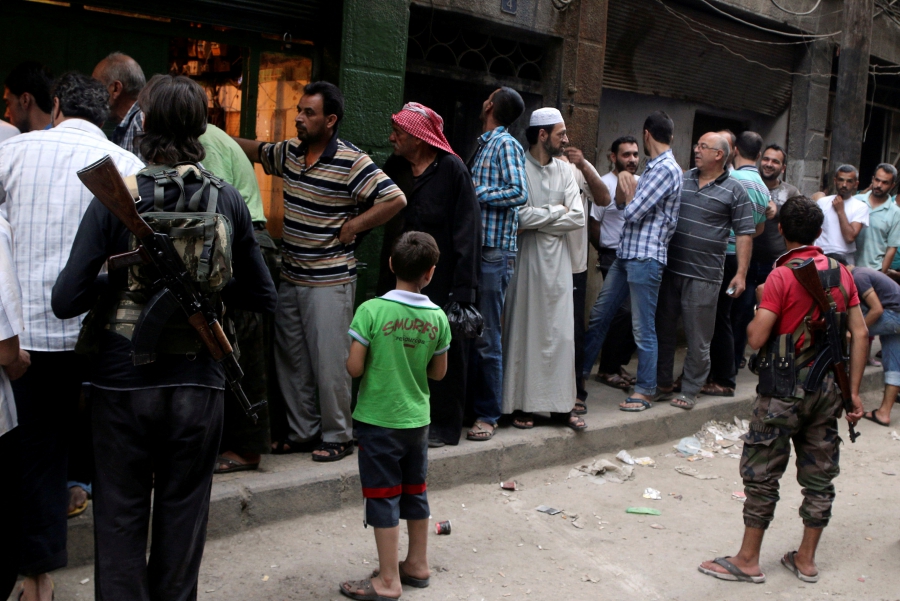 Rebel fighters stand guard as people queue for bread in the rebel held al-Shaar neighbourhood of Aleppo, Syria, on July 14, 2016.

The Syrian Observatory for Human Rights, a Britain-based monitor, had said earlier on Thursday that government and rebel fighters were still on the Castello Road and the army was unwilling to pull back until the opposition forces did so.

Eastern Aleppo is in desperate need of humanitarian aid after weeks of heavy fighting, and a government siege that has lasted most of the past two months, with no aid entering since early July.

Markets in east Aleppo have little to sell besides locally grown aubergines, parsley, and other herbs.

"We were dying from shelling before, and now we're going to starve to death," said Abu Ibrahim, 53.

The deal calls for the truce to be renewed every 48 hours, and for Washington and Moscow to begin unprecedented joint targeting of jihadists like IS and former Al-Qaeda affiliate Fateh al-Sham Front if it lasts a week.

There remains deep skepticism about whether the truce will hold.

The opposition has yet to officially sign on, and hours before the ceasefire began Assad said he was committed to recovering all of Syria.

France on Thursday called for Washington to disclose details of the truce deal to its allies bombing jihadists in the war-torn country.

If the deal does hold, it could open the door to new peace talks to resolve the conflict, with Russia saying the UN envoy could invite government and opposition representatives to new talks "at the very beginning of October."