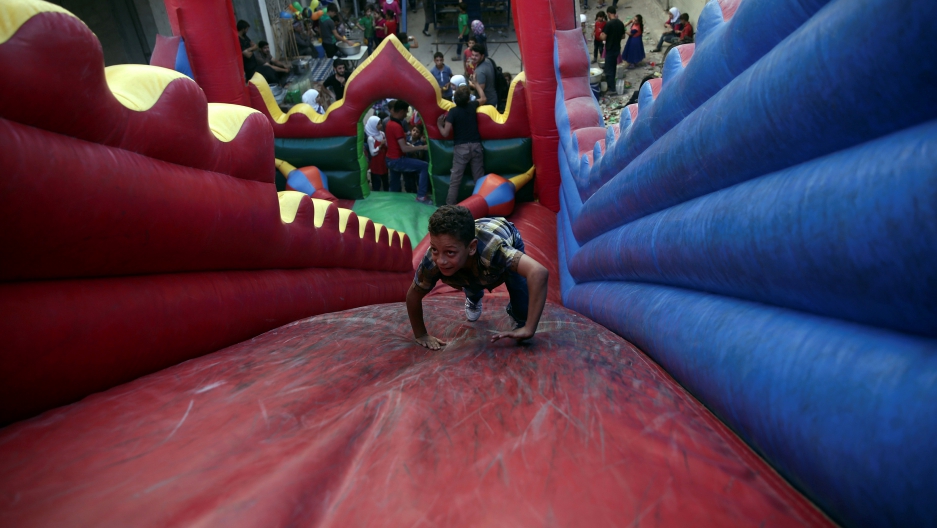 Children played on the bouncy castle on the last day of the Muslim holiday of Eid al-Adha in the rebel held besieged town of Hamouriyeh, outside of the Syrian capital of Damascus on Thursday, September 15, 2016.

A ceasefire agreement brokered by the US and Russia has brought relative peace and quiet to many areas in Syria, including places like Aleppo that have seen fighting for months on end.

“The killing has been greatly reduced,” said Jan Egeland, the coordinator of the United Nations humanitarian task force for Syria. “In fact, no reports on civilian casualties in the last 24 hours. Attacks on schools, attacks on hospitals have stopped.”

But this is Syria, so there is bad news too.

“We are not using this window of opportunity so far to reach all of these places with humanitarian assistance,” Egeland said.

The UN has trucks fully loaded with food and supplies, ready to roll into areas where the aid is needed most. But that is not happening, he said.

There is plenty of blame to go around, according to UN officials. They accuse the Syrian government of failing to provide the necessary paperwork to guarantee safe passage for aid convoys. They say rebel groups and opposition politicians are playing political games.

As usual since this civil war erupted more than five years ago, Syrian civilians are paying the price.

Egeland says people in Madaya, near Syria’s border with Lebanon, are starving. On top of that, they’re facing a meningitis epidemic. In rebel-controlled eastern Aleppo, where around 250,000 civilians are besieged by government forces, people are badly in need of food and supplies. But UN trucks are not able to enter those areas and others.

“What we had hoped was that the Russians and the Americans by now would have told the [Syrian] government and armed [Syrian] opposition groups that this is the way that it should be and that we would have had the access that we needed by now,” Egeland said.

Russia — which is flying a bombing campaign in support of Syrian President Bashar al-Assad — insists that Syrian regime forces are fully respecting the truce, but US-backed rebels are violating it.

The Russian military says that Syrian regime forces have begun pulling back from around a key road into the ravaged city of Aleppo, freeing the way for aid deliveries.

"The Syrian armed forces are fulfilling their obligations and have started a gradual withdrawal of military hardware and all personnel from the Castello Road, which will allow for the unimpeded passage of humanitarian aid to the eastern part of Aleppo," senior Russian officer Vladimir Savchenko said in a televised briefing.

A ceasefire deal agreed by Washington and Moscow that went into force at sundown on Monday calls for the demilitarization of Castello Road. Savchenko said that rebel groups close to the crucial route did not appear to be carrying out a simultaneous pullback as agreed.

The Syrian Observatory for Human Rights, a UK-based monitor, said that government forces and rebel fighters remained on the road after the ceasefire went into effect, and that the army was not willing to pull back before opposition forces did so.

The Russia-US deal calls for the truce to be renewed every 48 hours, and for Washington and Moscow to begin unprecedented joint targeting of jihadists like ISIS and former al-Qaeda affiliate Fateh al-Sham Front if it lasts a week.

There remains deep skepticism that the truce will hold up.