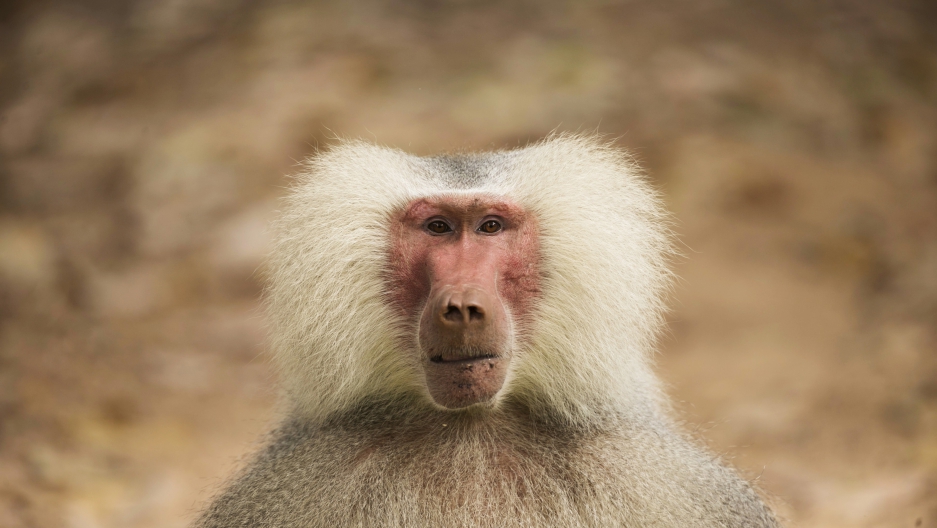 A male baboon (Papio Hamadryas) is seen at the Safari Zoo in Ramat Gan, near Tel Aviv, Israel, on September 9, 2015.

At a rundown park near the front lines in the Syrian city of Aleppo, a fragile truce has brought out visitors to see the last animal left at a makeshift zoo — "Happy" the monkey.

The 22-year-old hamadryas baboon has been a much-loved attraction at Sabil park in the western portion of the city for years.

But the conflict since March 2011 that has split Aleppo between government control in the west and its rebel-held east has taken its toll on Saeed, whose name is Arabic for "happy."

"He's not as happy as he was before the war. He used to be cheerful and happy but now he seems old, and he's sad because he doesn't get visitors like before," says Abdullah al-Jaghal, his 52-year-old keeper.

Sabil park was once a major draw for residents of Aleppo, a former economic powerhouse that has been ravaged by the country's five-year conflict.

Its mini-zoo included other monkeys and peacocks that are now all dead.

As violence has raged across Syria, residents have stayed away for fear of the rockets and homemade missiles fired by rebels in eastern Aleppo, which itself is regularly targeted in government air strikes.

The park bears some scars of the war, including a small pit left by a rocket impact, and the fighting has traumatized Saeed.

"Whenever Saeed hears the sounds of shelling or gunfire, he gets scared and tries to climb to the highest point in the cage," says Jaghal, who has cared for the monkey for the 18 years it has lived at the park.

"He's afraid of loud noises and when he gets scared, it takes him a long time to calm down again."

Even in the context of war, Saeed's enclosure is grim — a yellow-painted circular cage with nothing inside but a dirt floor sprinkled with remnants of food, including dried scraps of bread.

He walks around it with a chain and a small padlock around his neck, as adults and children watch him with interest.

"Our families have been coming since childhood to Sabil park to see Saeed and watch his acrobatics," says 35-year-old Bassam Primo, as his daughter handed the monkey a carton of juice.

"But with the war, he's gotten sick, and his wife died. After that he started to isolate himself and stopped interacting with visitors," he said.

Throughout the violence which has killed over 300,000 people and displacing half of Syria's population, Primo has kept visiting Saeed, often feeding him apples.

"But I found him depressed and sad," he says.

With the start of a truce negotiated by Russia and the United States, Sabil park was once again full this week, particularly as the lull coincided with the Muslim Eid al-Adha holidays.

Street vendors hawked goods to families enjoying a chance to walk without fear, while children crowded around Saeed's cage and called out his name.

"I was afraid that he would die of hunger or be hit by shrapnel from a shell."

But she winces at the children around his cage trying to provoke a reaction and says she is saddened by his confined habitat.

"He has brought us happiness for 20 years... but his place is not here, his place is in his homeland in Africa, and I wish he'd be able to go back there so he could be happy."