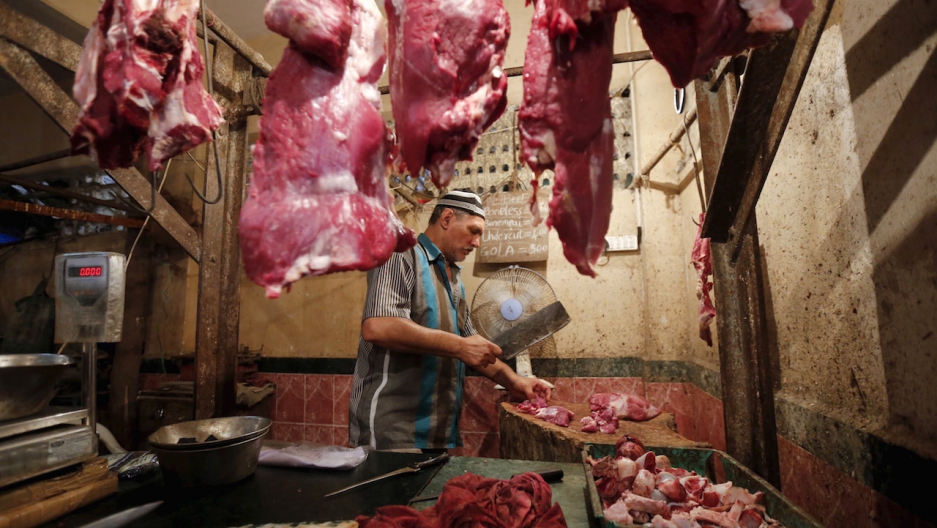 A butcher cuts meat inside his shop in Mumbai on Sept. 8, 2015. India's financial capital had banned the slaughter and sale of meat for four days that month following a demand from the strictly vegetarian Jain community, sparking outrage among meat-eaters already upset by a permanent beef ban imposed that year.

Earlier this summer, looking for ways to fight rising health risks and reduce its carbon footprint, China pledged to cut its meat consumption in half by 2030.

The bold move by a fellow Asian giant inspired PETA India to write to Prime Minister Narendra Modi, urging him to pass a similar resolution in India and to adopt veganism as the diet of the future.

“Choosing to be vegan is one of the easiest and simplest things we have the power to do to help the planet, animals and ourselves,” said Bhuvaneshwari Gupta, an associate manager at PETA India. “Anyone who consumes animal derived foods is contributing in an unnecessarily negative way to climate change.”

PETA’s demands may seem strange to those outside India — the billion-person country is widely known as a vegetarian nation where cows are revered by devout Hindus.

Rarely acknowledged, however, is the plain fact that four out of five Indians do eat meat.

And while Indian cuisine is often vegetarian-friendly, Kurush Dalal, a culinary archaeologist and chef based in Mumbai, says most Indians don’t try to avoid animal products.

“For the last 8,000 years, the majority of Indians have been non-vegetarian, and their No. 1 choice of meat was beef,” says Dalal. “This is archaeological and historical fact.”

According to Dalal, the princes and heroes of Indian mythology and lore 10,000 years ago would have consumed “the best protein, the most expensive protein, which would have been calf.”

But these days, Indian elites tend to promote avoiding meat.

“We know that the large group which are vegetarian are Brahmins, along with some Jains, Vaishyas and some self-proclaimed vegetarians who account for 10 percent of the population,” explains Veena Shatrugna, the former deputy director of the National Institute of Nutrition. “Give or take another ten percent, 80 percent is still non-vegetarian.”

That’s not to say vegetarianism isn’t a norm in India. Indeed, those who consume red meat, poultry, seafood and even eggs in the country are described as “non-veg” — deviants from the religious and cultural vegetarian ideal. (Veganism would be another story — Indians love their milk, and dairy doesn’t run into the same religious restrictions.)

The revered Mohandas K. Gandhi is a common point of reference for proponents of vegetarianism. His principles of nonviolence extended to animals, and he did not consume meat or milk from cows or buffaloes. Goat milk, however, became acceptable and even necessary when his health started to fail.

Exceptions continue to be made today, as even some highly religious Indians who are vegetarian most of the time won’t have a problem consuming meat.

“The vegetarian Bengali Brahmin will consume meat when it comes from the temple as prashad [a religious offering],” says Dalal. “He will cook it without onion and garlic, and it is called ‘vegetarian mutton.’”

While fish remains the protein of choice in coastal India, chicken has outpaced beef and mutton as the animal of choice for most of the country.

Dalal says this is a modern phenomenon.

“Do people who eat chicken in India today realize that it was once more expensive than mutton?” he says. “About 65 years ago in Bombay, there were big banners that said ‘chicken for the price of mutton,’ because it was a huge revelation.” 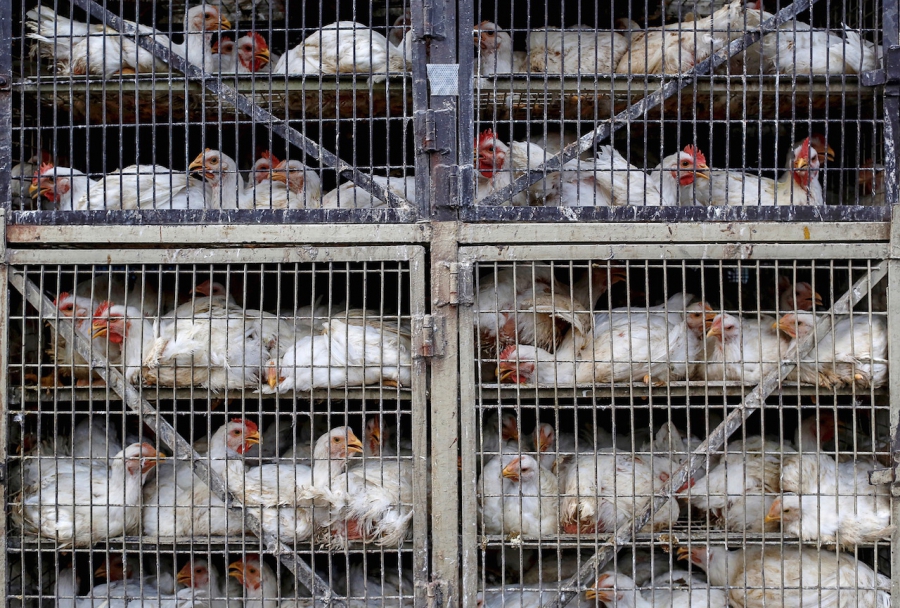 Chickens in a truck at a poultry market in Mumbai on June 1, 2015. Chicken prices in India soared to a record high after a heat wave killed more than 17 million birds in May that year.

So, with all this meat-eating, how does India hold onto its reputation as a land of strict vegetarians?

It could be that those who abstain from meat also tend to enjoy economic and political advantages that make their voices louder and stronger.

“It’s the kind of people who are at the helm of affairs, whether it is politicians, bureaucrats, researchers or agricultural scientists,” she says. “They are really blinkered by their own experiences and they just assume that the rest of the country enjoys vegetarian food or should be eating vegetarian food.”

Nutritional recommendations issued by the Indian government emphasize the consumption of cereals and pulses, but pay no attention to meat or eggs. PETA has praised Modi’s opposition to meat. The Hindu right has succeeded in imposing beef bans in some states, while in others it has successfully sowed fear of the consequences of consuming beef.

Read more: Why India's beef lynching is not about a dead cow

“Meat eating is a very private affair, but when there is a public debate about killing animals or veganism or the upper caste making a virtue about their food choices, it is not surprising that the so-called ‘lower’ castes flinch at the thought that they are doing something that is not the norm,” says Shatrugna. “The norm is established by this bunch who is a powerful minority.”

Avoiding meat thus is a sign of moral and class virtue.

Dalal points out that there is an interest abroad in portraying India as a spiritual and non-violent country, which also helps the “vegetarian nation” stereotype stick. Shatrugna concurs.

“The West loves to lap it up, we love to look at cultural differences and anthropological idiosyncrasies and play it up,” she says.

But meanwhile, many of India’s poor majority suffer from malnutrition that meat and animal products could combat. The average Indian simply cannot afford to eat more than the half-ounce of meat per day they currently consume. 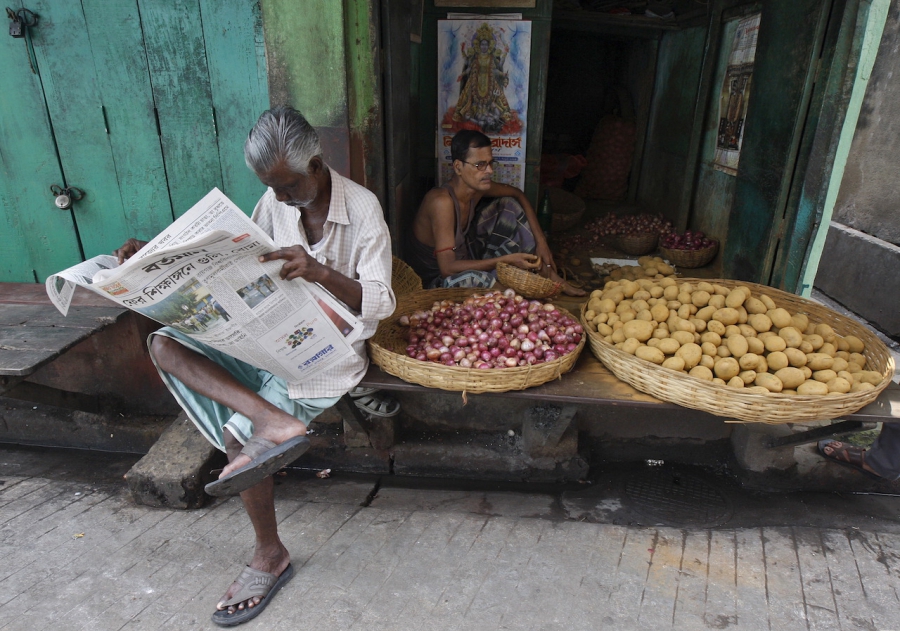 A local resident reads a newspaper next to a vendor selling potatoes and onions in Kolkata, Sept. 4, 2015.

According to Shatrugna, bureaucrats enamored with vegetarianism have promoted it as policy. The agriculture sector has therefore invested in wheat and rice instead of meat and poultry, making it more difficult for the poor to access high-quality protein.

Last year, despite opposition, Madhya Pradesh removed eggs from lunches at the state’s free day care centers, where many children are undernourished.

Overall, India’s secret love for meat hardly qualifies it for PETA’s environmental and health concerns. The OECD and FAO looked at animal carcass weight in 2015 and calculated that while every American consumed an average of 210 pounds of meat, each Indian consumed 6.4 pounds. In China, average meat consumption stood at 110 pounds per person.

In fact, rather than halve meat consumption, Shatrugna insists that India urgently needs to push meat consumption higher, to combat the prevalence of severe anaemia and nutritional deficiencies.

“We first need to saturate our systems with enough food and nutrients so that the bodies of the poor are not aching all the time,” says Shatrugna. “Let’s not mock the poor in India by saying we should reduce meat consumption.”