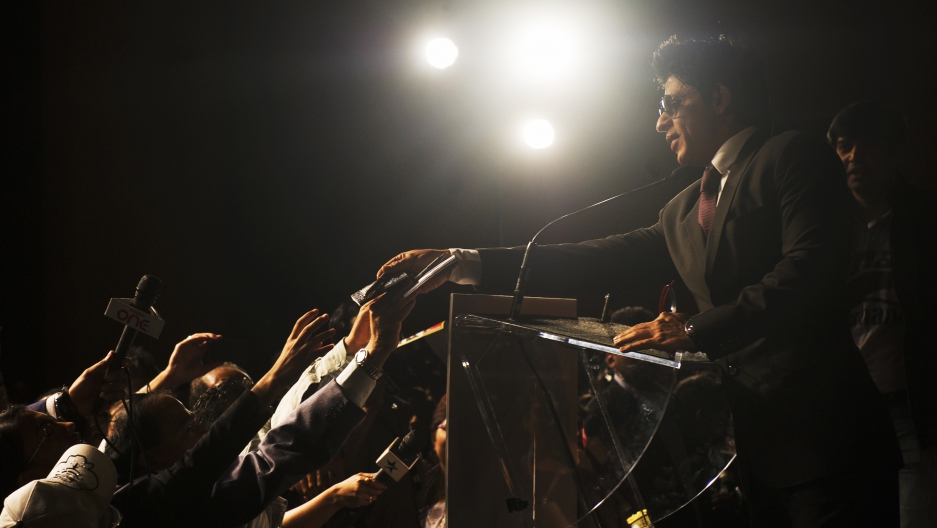 Shah Rukh Khan signs an autograph at a news conference in Toronto in 2011. Since 9/11, he’s been detained three times at US airports.

Last month, Indian superstar Shah Rukh Khan made headlines after he tweeted about the third time he had been detained at an airport when traveling to the United States.

“I fully understand and respect security with the way the world is, but to be detained at US immigration every damn time really, really sucks,” he wrote. “The brighter side is, while waiting, [I] caught some really nice Pokémons.”

I fully understand & respect security with the way the world is, but to be detained at US immigration every damn time really really sucks.

The brighter side is while waiting caught some really nice Pokemons.

The first time it happened was in 2009, when he was held for more than two hours at Newark Airport and only released after intervention by the Indian Embassy. He was, coincidentally, working on a film called “My Name Is Khan,” about an Indian Muslim man, Rizwan Khan, who lives in San Francisco and is racially profiled after 9/11. There’s a scene in the movie where Rizwan is also detained in the airport and delivers his signature line: “My name is Khan, and I am not a terrorist.”

The second time he was detained was in 2012, again in New York, while he was on his way to give a commencement speech at Yale University. He had no Islamophobia-themed love story to promote this time around.

“Whenever I start feeling too arrogant about myself, I always take a trip to America,” he joked then to the graduates. “[The government officials] always ask me how tall I am and I always lie and get away with it. ... Next time I am getting more adventurous. ‘What color are you?’ I am going to say white.”

Shah Rukh Khan’s name is reportedly flagged in a government database, which could explain why this happens so often. One might wonder, though, how difficult it would be to add an addendum to the alert. Perhaps something like: “Shah Rukh Khan is also the name of one of the biggest stars in the world. Maybe do a quick Google search or look around to see if any Indian Americans around you are flipping out at the mere sight of him, because you will be mocked by international media if you detain him for a fourth time.”

Even if government agents were following protocol, the fact that such a high-profile celebrity can be repeatedly treated as a potential enemy begs the question: How often are innocent civilians’ rights are violated as a result of current passenger screening programs? In March 2015, the American Civil Liberties Union and the New York Civil Liberties Union sued the TSA and demanded to see records of their  “Screening Passengers by Observation Techniques (SPOT)” program. The ACLU claimed the program is ineffective and lacks a scientific basis.

“We remain concerned that the TSA has not done enough to address unlawful profiling at airports,” ACLU staff attorney Hugh Handeyside wrote in an email. “Documents obtained through our lawsuit against the TSA raise serious questions about whether the TSA’s behavior detection programs can be used at all without creating an unacceptable risk of racial and religious profiling.”

They plan to release the documents when they are finished reviewing them.

In the 15 years since the September 11 attacks, presumed racial profiling has become so normalized that people's frustrations are now often expressed through exasperated humor. A search for many up-and-coming celebrities of South Asian descent and the word “airport” shows just how much airport racial profiling has become a part of their universal experience in America.

Factoring in the extra time it takes for a "random security check" when you go to airport. Esp if you forgot to shave #brownpeopleproblems

Just told the Starbucks at the airport that my name was Ayatollah Bombface. Lol let's see wha

When I was 'randomly' detained at the airport today the officer who interviewed me was Indian. Silver lining? WE ON THE COME UP.

It happens with more frequency with men and women who wear turbans or other head coverings, who, by TSA policy, are often required to undergo additional screening even if they don’t trigger the alarms.

“What kind of message are we sending when people see that every single turban-ed person requires an extra screening?” asks Vishavjit Singh, the cartoonist who is best known for his alter ego Captain Sikh America. His costume helps him challenge stereotypes about men who wear turbans.

As part of his work on Sikhtoons, he’s made numerous cartoons as a response to his experiences with the TSA and other stereotyping issues here in the US. 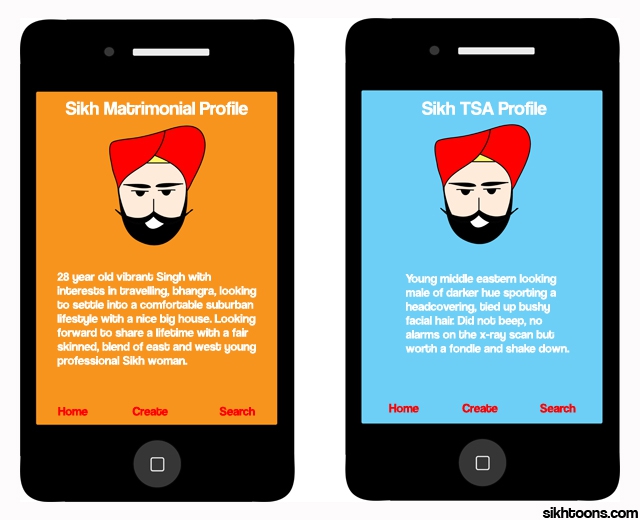 After 15 years, Singh has made peace with the extra time it takes for him to get through airport security. He believes TSA training has improved since 9/11 — the TSA has even worked with the nonprofit civil rights organization Sikh Coalition to develop FlyRights, an app to report TSA harassment in real time — and appreciates that there are now people of different backgrounds who will stand up against all forms of injustice.

At the same time, he says Donald Trump’s political rise is proof that Islamophobia is at a high. In his personal life, he can still feel people’s stares, especially right after horrific incidents, like the 2015 San Bernardino attack. The only difference is that now, instead of calling him “Osama Bin Ladin,” hecklers yell out “ISIS.”

Singh believes we shouldn’t underestimate the influence of art and entertainment when it comes to combating growing xenophobia.

“Humor is one of the most effective tools to engage people and open up conversations,” he says. “As a kid, I was the No. 1 target for bullies, but as I became an adult, it helped to have a creative outlet to express myself and respond to the world around me.”

He now travels around the nation, leading interactive cartooning workshops for students, and finds it heartening how easy it is for the younger generation to connect with his stories. 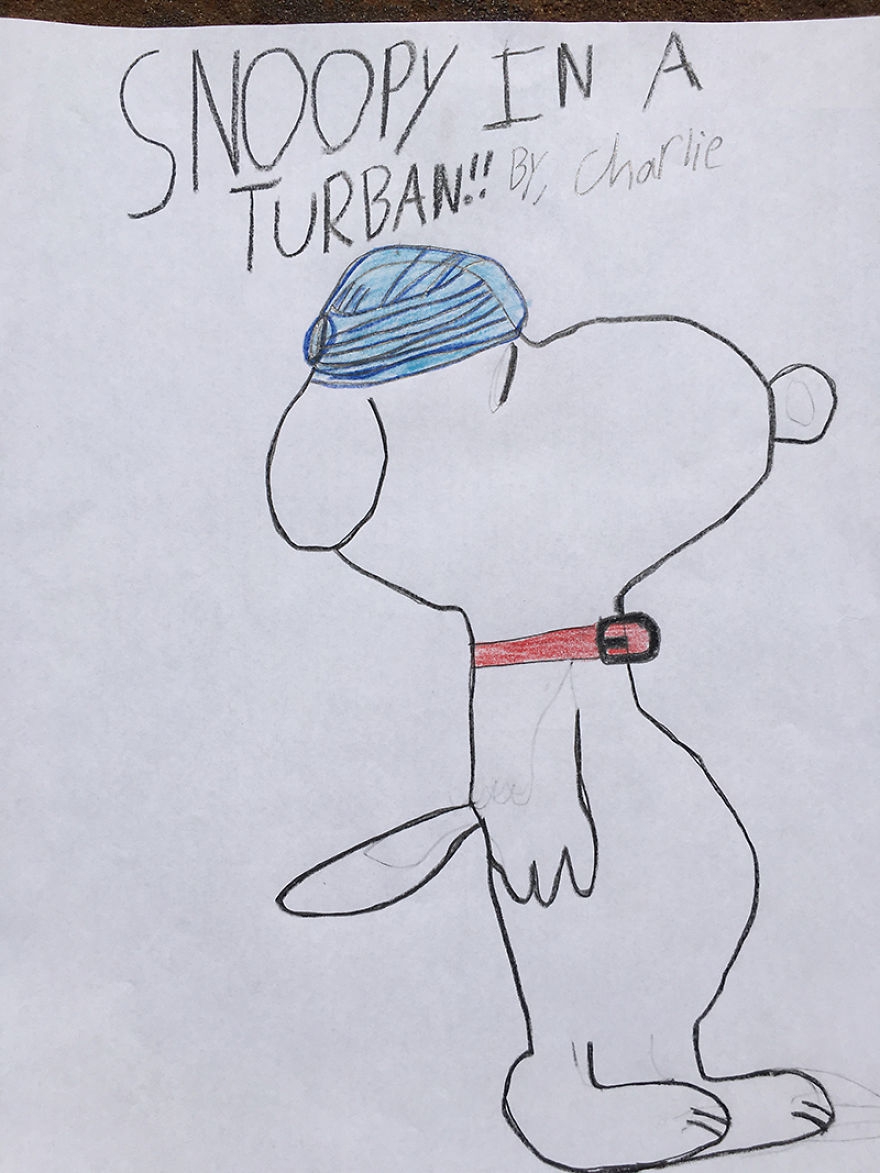 This picture of Snoopy in a turban was drawn in one of Vishvjit Singh's middle-school workshops in San Francisco. None of the students were Sikh and it was their first "turban art.

“Kids today are more open to diversity, in every sense of the word,” Singh says. “In my workshops, I often don’t give them much instruction, and I just ask them to use their imagination to create something through cartoons,” says Singh. “And in every group — whether I’m in Kansas, New York, California or Mississippi — there will be [non-Sikh] kids that incorporate turbans and beards into their art, just from having seen me give a presentation.”

What has changed since 2001, Singh believes, is that minorities like him are getting out of their comfort zones, unafraid to share their experiences with people outside of their communities and aware of the importance of connecting with people through these types of creative endeavors.

As a result, those who are stopped in airport security lines are no longer inscrutable foreigners, but familiar faces. It’s the comedian whose stand-up album hit number one the iTunes comedy chart earlier this year; it’s the star of that HBO drama “The Night Of” that everybody is talking about at work; it’s the brother on “The Mindy Project” who just released his first EP and music video; it’s the actor from “Silicon Valley” who did that crazy nude scene in the new Zac Efron movie; and it’s that correspondent on “The Daily Show” who burned Congress last year as the host of the 2015 Radio and Television Correspondents' Dinner.

Or it might just be your favorite Bollywood actor.