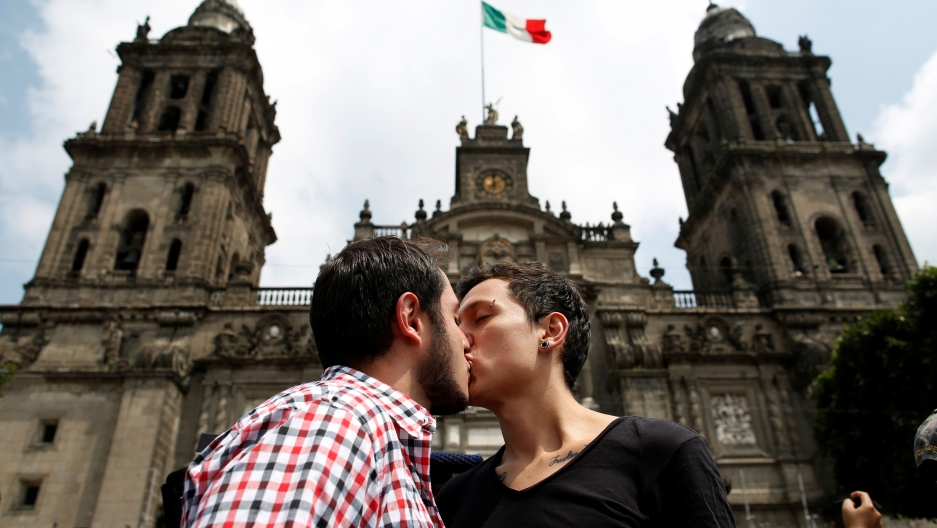 A couple kiss each other in front of the cathedral during a march in support of gay marriage, sexual and gender diversity in Mexico City, Mexico on September 11, 2016. There have been counter-demonstrations, against same-sex marriage, held in Mexican cities in recent days as well.

Gay couples in Mexico already get married when they wish, thanks to the blessing of the highest court in the land.

But big demonstrations across the country in recent days show that, politically at least, the issue of same-sex marriage is far from settled.

Thousands of people marched throughout the country this past Saturday to protest President Enrique Pena Nieto's initiative to legalize gay marriage. Counter-protesters came out in force, too.

The National Front for the Family, a coalition of conservative religious groups, called for the protests. The coalition is also planning a mass march for Sept. 24 in Mexico City.

"Long live the family, in the image of the Virgin Mary, the baby Jesus and Saint Joseph," read one sign at the protest in the city of Puebla, the capital of a central Mexican state with a strong Catholic presence.

"Papa + Mama = Happy Family," read another sign at that protest, where many of the protesters wore white and carried pink, blue, and white balloons.

An estimated 5,000 people marched in Veracruz, where some got into verbal clashes with gay rights counter-protesters.

Thousands of people of various religious denominations also turned out to protest in the streets of the northern border city Ciudad Juarez.

In May, Pena Nieto announced a constitutional reform that would legalize same-sex marriage across Mexico. Several other Latin American countries already allow such unions.

The announcement followed a Supreme Court ruling last year declaring that a ban on same-sex marriage is unconstitutional.

“Legally, the question is basically settled,” says Lester Feder, who covers LGBT issues for Buzzfeed. “But there’s an implementation problem and that is what has brought this to a broader conflict.”

Currently, only a handful of the country's 31 states and Mexico City allow such weddings.

The National Front for the Family is strongly against same-sex couples adopting children, and also opposes teaching about homosexuality and transsexuality in school sex education classes.

A gay rights advocacy group said that homophobia has surged in Mexico since Pena Nieto's proposal. The Citizen Commission against Homophobic Hate Crimes said at least 26 people from the LGBT community were killed so far this year.

The majority of the population of Mexico is Roman Catholic, and church leaders in Mexico are firmly opposed to same-sex marriage.

“But the fact that the country is Catholic doesn’t mean that it’s going to be less likely to embrace marriage equality,” Feder says. “A number of Catholic countries have been at the forefront of marriage equality.”

Feder points out that in Europe, Spain, Portugal and Belgium have all adopted same-sex marriage. And in Latin America, Argentina legalized same-sex marriage in 2010, despite opposition from Cardinal Jorge Mario Bergoglio, then-Archbishop of Buenos Aires, who went on to become Pope Francis.

“The issue is about the different political cultures and the power of the church [in Mexico],” Feder says.

Mexico has a long history of preventing the Catholic Church from getting directly involved in politics, Feder adds — “Including for a long time, prohibiting priests from voting.”

“The question here," he says, "is whether the church will have the political clout to endorse these marches and help stop the marriage amendment."