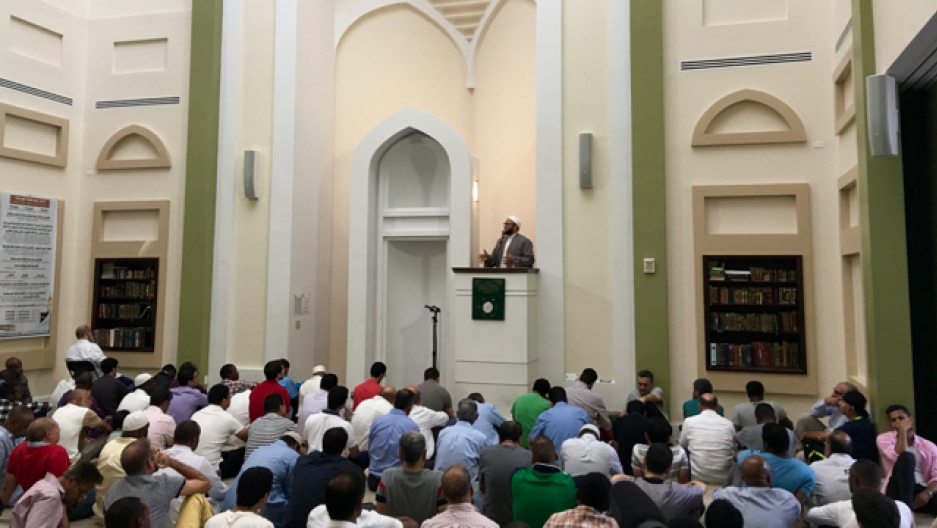 Shaykh Yasir Fahmy preached on Friday, September 9th, at the Islamic Center of Boston Culture Center about the meaning of the Muslim holiday of Eid al-Adha.

Sheikh Yasir Fahmy waited until the end of his Friday sermon to address something that had been causing plenty of anxiety in his congregation.

“Obviously, [it is] something that is very difficult to reconcile, especially in our current climate when Islam is not, let’s just say favorable, in our public discourse,” Fahmy told his congregation on Friday.

Fahmy is the senior imam at the Islamic Society of Boston Culture Center. He was born and raised in New Jersey and he studied at Al Azhar University in Cairo, the most prominent university in Sunni Islam.

“We’ve been biting our nails for the past weeks, because there was a possibility that Eid al-Adha would fall on Sept. 11,” Fahmy said.

Of course, Muslim Americans do not control the specific date for the Eid holiday every year, Fahmy reminded the congregation. But he said that simple explanation would probably not fly with much of the US public.

Eid al-Adha commemorates the faith of the Muslim prophet Ibrahim, also known as Abraham in the Bible. And it comes at the end of the Hajj season, when Muslims from all over the world make pilgrimage to the holy sites in Mecca and Medina in Saudi Arabia.

Islam follows the lunar calendar, so the holy day of Eid falls on a different day, year-to-year.

When Saudi religious officials looked into the sky and spotted the new moon at the start of this month, and then they announced that Eid would be Sept. 12 — rather than a day earlier — many Muslims in America breathed a collective sigh of relief. 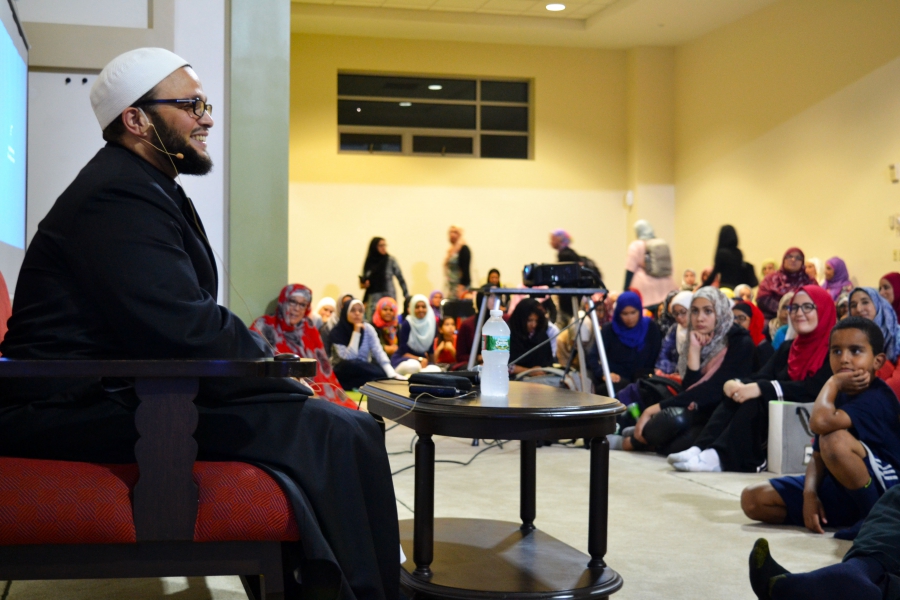 The difficulty is still there, however, Fahmy explains during an interview in his office at the mosque.

For Muslim Americans, Fahmy says, Sept. 11 is always a day for grieving, while Eid al-Adha is one of the most important days of religious celebration in the year.

A lot of American mosques decided to change plans this year. Instead of holding big outdoor gatherings for morning prayer on the day of Eid, they met indoors and out of sight.

Fahmy’s congregation in Boston didn’t have to choose, however.

They came together, as usual, in a large indoor track-and-field center in Boston. The crowd was easily more than 5,000 people, many families dressed in their holiday best, with traditional clothes from just about every part of the Muslim world.

The morning prayer for Eid got started early in Boston, soon after 8:00 am.

“We don’t come to the celebration just thinking about partying, but we are actually guided to think about, ‘Well, are you really living prophetically or not?’”

For Eid al-Adha this year, Fahmy wanted to call attention to the sermon delivered by the Prophet Mohammad himself on the very same religious holiday, in which Mohammad talked about human dignity, the sanctity of life and property, and about the values of compassion and mercy.

This was at the end of Mohammad’s life, and Fahmy says the centuries-old message should still resonate with Muslims today.

“The prophet is saying, ‘Make sure you’re dignifying… human life, at every corner,’” Fahmy said.

Fahmy says he hopes people are taking the time during this Muslim holiday to reflect deeply about "here our world is right now, and where we want it to go.”

That, he says, is the real spirit of Islam.