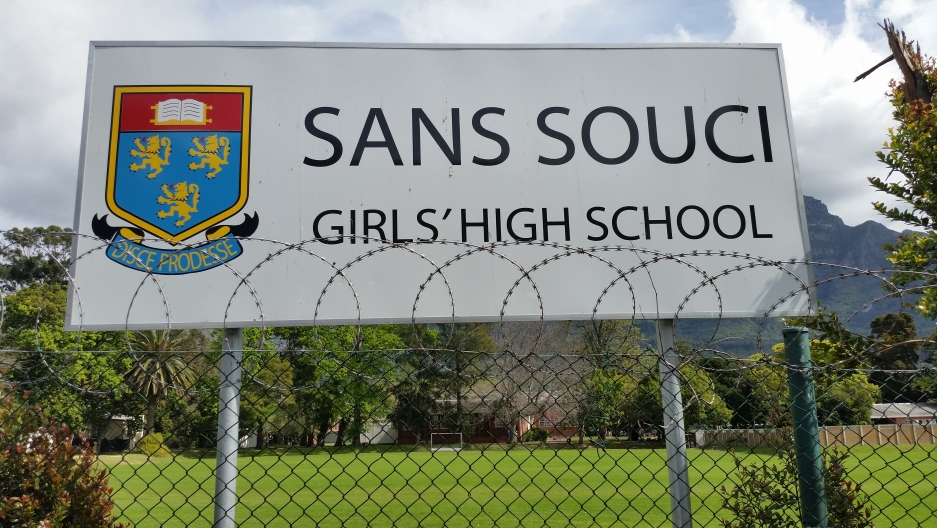 In recent weeks, hundreds of South African students have accused their schools of racism.

Protests began at a high school in Pretoria, where black girls faced rules about how to wear their hair. As demonstrators pointed out, hair policies are racially charged in a country with a history of segregation. At one time, race in South Africa — and therefore school admissions — was determined using a “pencil test,” in which a pencil was pushed through a person's hair.

In response to the language ban, hundreds of students and graduates demonstrated on school grounds. Three of them share their stories below, in condensed form.

Because each one represents a different generation in South Africa's school system, their perspectives aren't just an account of a protest — they're also a ground-level view of South Africa's educational system, in the years since apartheid.

1991 was the first year that schools were open to people of all races. You know, it was access to a dream. I remember government made the announcement towards the end of one week, and by the start of the next week, we all had lined up interviews at these prestigious schools. I was sent to the hairdresser over the weekend to get my hair done.

In those days, we all had our hair relaxed or blow-dried. Sit with curlers in your hair, waiting for it to get dry. That was very accepted in colored culture back then. [Colored is the South African term for mixed-race.]

As that first generation that was put forward for integration, our role was literally to play out the Rainbow Nation scenario. Our job was to assimilate, to learn how white culture worked. Because our parents were preparing us to work in white business, and to have the better life that they hadn't had.

Sans Souci itself did not have the rules that it has now. We had rules on your length of your hair — if it touched your collar, it had to be tied up, but [not] it was shorter than that. There was no language policy. It has regressed. Because at the height of what was still apartheid, we had more rights and we were more respected than girls are now.

For me, beyond issues of hair and blackness are issues of humanity. How do you deny someone speaking to their friend in their own language, out of the class situation? As a woman of color, I believe that we need to stand up for each other. The issue might not affect you directly, but stand up for the woman next to you.

I was there when a lot of these rules were implemented. They weren't as bad as they are today.

I struggled personally with bullying. It happened very early on in my school career, because of the type of hairstyle that I was wearing. In 2007, I was in grade 9, and I was being bullied. I broke down in tears in class, and the teacher sent me to the principal's office to go and lay a complaint.

In 2007, the rule that this is an English medium school was first put into place. And that meant that girls were not allowed to speak their native languages, Xhosa being one, in class time. If you wanted to speak to your friend, you had to speak in English.

The history of language in this country is so deep, and none of the issues have ever been dealt with. In 1994, it was [the] “Rainbow Nation.” But what did that Rainbow Nation mean? It basically meant that we need to put on happy smiles and get along, not really looking at the deeper issues. I think there's a lot of wounds that are being scratched open, that we have to start addressing.

The language and hair policy have been in place for approximately five years. I see them as triggers. There's this underlying issue of institutional racism — it's through that that they're able to discriminate against us. A lot of the girls decided that it's time to speak up.

When I was small, and I came to South Africa [from Rwanda], they said, "You'll have to speak Afrikaans." That just changed everything. Now I only know Afrikaans and English, and I don't even know my mother tongue fully. It's quite sad that I don't know that. And there are a lot of schools that perpetuate things from a colonial time. It might even be just about all the schools in South Africa.

That's amazing, because it literally took us a few days to mobilize, and to do things the right way. We didn't vandalize property, we didn't stop services from happening. We did everything in an orderly fashion. I think it's definitely a movement. The girls aren't just accepting the fact that they've gotten some things. They want everything.