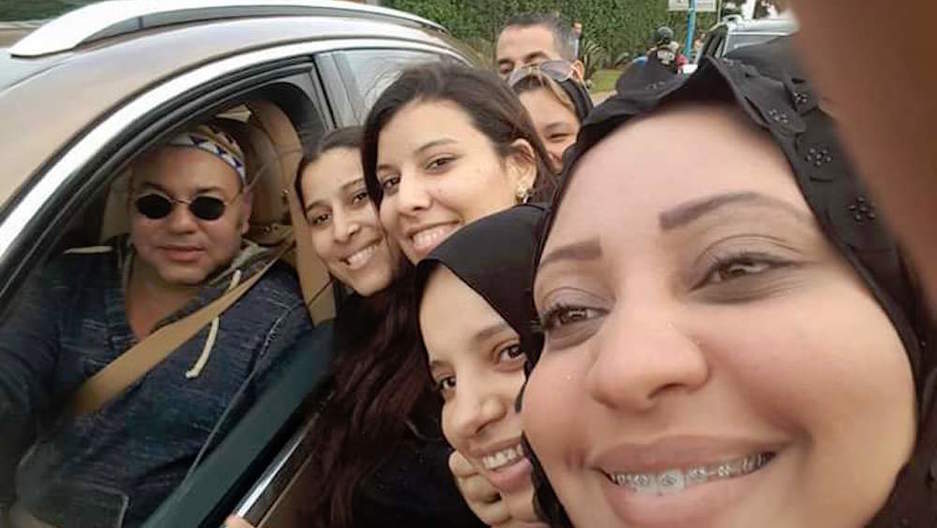 King Mohammed VI poses with his subjects in this picture taken from the Facebook page, Roi du Maroc: Mohammed 6. It serves as an unofficial social media site for the country's royals.

Smiling and relaxed, Morocco's King Mohammed VI wears a psychedelic T-shirt and jeans as he poses with an admirer in Paris.

It's a far cry from the traditional pomp of Morocco's royal court, but pictures of the king casually posing with his subjects are doing the rounds on social media.

"We were on a family shopping trip on the Champs Elysees when I saw the king in a 4x4," wrote "Momo," an anonymous Facebook user who appears in the picture.

"I called out emotionally — 'Sidna' [your majesty]. He was kind enough to stop, come and say hello and take my little girl in his arms for a photo."

In other pictures posted on a dedicated Facebook page, the king talks with a fan in a Paris Saint-Germain football club cap. In another, an admirer in overalls kisses his shoulder in a sign of respect.

There is no sign of a bodyguard in the photos, many of which are taken overseas and have the air of casual holiday snaps taken by friends.

The Moroccan royal family have no official pages on the social networking site.

But the photos posted on a popular unofficial Facebook page appear to be part of a carefully engineered strategy, says French historian Pierre Vermeren.

"These images come from a well-thought-out communications policy," he says. "There's a clear desire to show how close the king is to his people."

The 53-year-old king's habit of posing with the public contrasts with his approach to the traditional media, which he keeps at arm's length.

It also marks him out from other heads of state, particularly in the Arab world, who stay behind imposing security barriers.

Judging by comments on social media, it is a strategy that is working with Moroccans — apart from a few criticisms of the cost of his clothes.

"The most beautiful picture with the children, it's a sign of humility and love for the new generation ... best king in the world," Jomana Naji wrote in one comment.

Like the photo of "Momo," many of the shots — taken during the king's private trips — are posted on a Facebook page, "Roi du Maroc: Mohammed 6."

The page, which has 3.5 million subscribers, is administered from a town near the capital Rabat by Soufiane el-Bahri, a 25-year-old playboy with gelled hair and a broad smile.

A well-known member of Morocco's super-elite, Bahri keeps his distance from the media. He did not respond to an AFP request via Facebook for comment.

He administers three other unofficial pages of members of the ruling family, along with his own page full of pictures of himself.

Many in Morocco wonder how he obtains the photos and comments from the people posing in them — as well as the reaction from the royal court, habitually prickly when it comes to the king's private life.

In a recent interview with CNN Arabic, Bahri said that while he "madly admires" the king and "works in coordination with his cabinet," he had never actually met the monarch.

It was almost certain the palace approved the publication of the photos, says Vermeren.

Many Moroccans remember the king's father and predecessor, Hassan II, who would never have allowed such photos, he says.

"Hassan II sowed fear and was himself afraid of his people. Since he took the throne, his son has tried to take the opposite course."