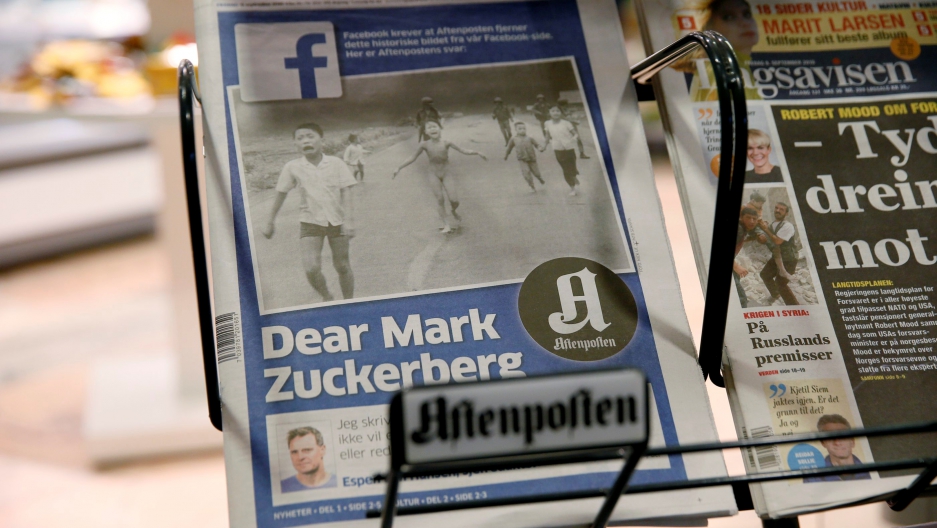 The front cover of Norway's largest newspaper by circulation, Aftenposten, is seen at a news stand in Oslo, Norway, on September 9, 2016. Editor-in-chief and CEO, Espen Egil Hansen, writes an open letter to founder and CEO of Facebook, Mark Zuckerberg, accusing him of threatening the freedom of speech and abusing power after deleting the iconic picture from the Vietnam war, taken by Nick Ut, of a young girl running from napalm bombs.

Facebook faced outrage Friday for repeatedly deleting a historic Vietnam War photo, including in a post by Norway's premier, which appears to be the first case of the social network censoring a government head.

The 1972 picture of a naked Vietnamese girl running from a napalm attack was taken by photographer Nick Ut Cong Huynh for Associated Press and is considered one of the war's defining images. It was honored with the Pulitzer Prize.

"What Facebook is doing by deleting photos like this, as good as their intentions are, is to edit our common history," she wrote in a later post.

Solberg had posted the picture in the name of freedom of expression amid a brewing debate in Norway.

The affair began several weeks ago after Norwegian author Tom Egeland published a post about war photos, illustrated by the iconic picture. It was promptly deleted by Facebook.

Norwegians rose to his defense and published the photo, posts which Facebook also deleted in line with its rules barring nudity.

"While we recognize that this photo is iconic, it's difficult to create a distinction between allowing a photograph of a nude child in one instance and not others," a Facebook spokesperson said in an email to AFP.

"We try to find the right balance between enabling people to express themselves while maintaining a safe and respectful experience for our global community," it said.

Solberg refused to back down, re-posting the photo on her Facebook page, along with several other iconic pictures with sections blacked out, in an attempt to illustrate the absurdity of censoring historic images.

The affair has taken on such proportions that the Norwegian Press Federation has asked the country's powerful pension fund, the world's largest sovereign wealth fund, to examine whether the censorship practice was in line with its ethical criteria for investments.

Traditional media also expressed concern about the moves by Facebook, which has become a key conduit of information for many people.

On Friday, Norway's biggest daily Aftenposten dedicated its front page in its print edition to the photo, and published a two-page open letter to Facebook founder Mark Zuckerberg.

"I write you this letter because I'm concerned by the fact that the biggest media in the world is limiting freedoms instead of trying to broaden them, and because this is happening in a sometimes authoritarian fashion," editor-in-chief Espen Egil Hansen wrote under the headline "Dear Mark."

"I'm afraid we're becoming a society where the lowest common denominator determines what is shocking to the global population," Hansen told AFP.

"The information has to be as acceptable in a small village in Pakistan as in an intellectual milieu in Paris. This lowest common denominator is a very dangerous mechanism when it is implemented by the most influential editor-in-chief in the world," he said in reference to Zuckerberg.

This is not the first time Facebook has been accused of censorship. The company has in the past blocked several artworks.

It is to go on trial in France after a schoolteacher accused it of censorship for blocking his account after he posted a photo of a painting by Gustave Courbet called "L'Origine du monde" (The Origin of the World) that shows a woman's genitals.

And earlier this year, a Danish lawmaker also complained that Facebook had removed her picture of the Copenhagen statue of the Little Mermaid because of its nudity rules.