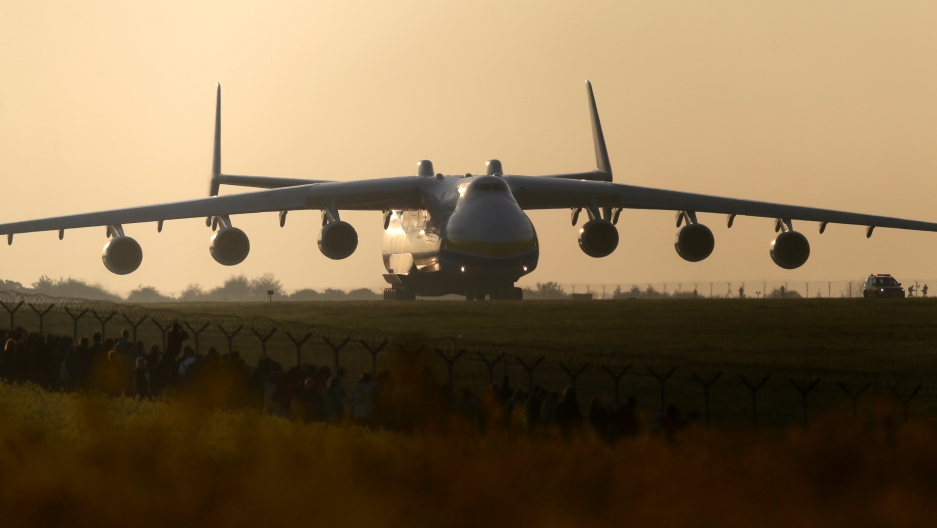 Plane spotters watch Antonov An-225 Mriya, a cargo plane which is the world's biggest aircraft, driving along the Vaclav Havel Airport for its first commercial flight from Prague to Perth, in Prague, Czech Republic, on May 12, 2016.

Ukraine said on Wednesday it may deliver the world's largest jet — originally developed for the Soviet Union's abandoned space shuttle program — to China within the next five years. And a partnership of the two countries is expected to lead to mass production of the now-rare plane.

The first AN-225 Mriya (Dream) six-engine heavy lifter was built by the Soviet Union's Antonov aircraft maker in the 1980s. Only one functioning Mriya exists, while a second was only partially completed and has remained in Ukrainian storage for the past 28 years.

Mriya's maker, the Antonov company, moved from Russian Siberia to Kiev in 1952 and fell into Ukraine's lap when the Soviet Union fell apart in 1991.

Antonov and the Aviation Industry Corporation of China signed a memorandum of understanding on August 30 to renew the cargo jet's production in China under licence from Ukraine.

That also means the never-finished second plane will find new life. Antonov's China project coordinator Gennadiy Gabruk said the second plane would be fully upgraded and "under optimal conditions" would be delivered to China by 2021.

"This jet will be built using the basis of the basic framework we already have, but all the equipment will be new," Gabruk told reporters.

That should be the beginning of a fleet of Mriyas. The memorandum of understanding foresees mass production of the plane by China — under license from Antonov — if all the technical details are resolved.

China has not officially said what use it has for the Mriya. But the country reportedly conducted covert work on its own shuttle program before dropping the idea in the 1990s.

The booming nation remains keen to join the international space race and is reportedly considering a permanently manned moon base. Such a project would need a vessel to shuttle people to and from Earth.

The Soviet Union developed the Mriya to transport shuttles that could compete against those being used by the United States. Moscow conducted a successful test flight of an unmanned Buran orbiter from its Baikonur space centre in present-day Kazakhstan in 1988. Mriya was able to ferry the Buran fixed on top of the plane.

But a second flight planned for the early 1990s had to be scrapped because of the Soviet Union's disintegration and Russia's subsequent deep economic malaise.

Some military experts believe that Beijing does not intend to employ the craft in a space program but rather to use it as a heavy lifter for domestic and international projects.