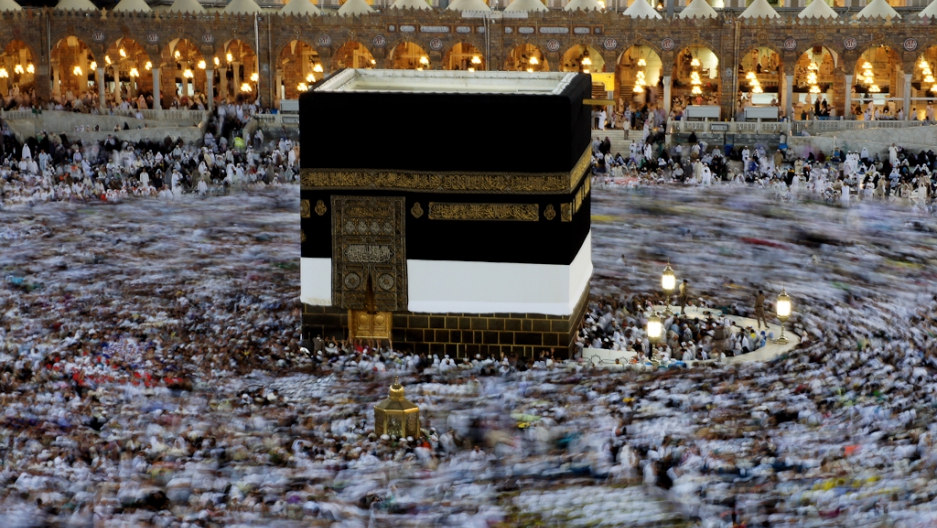 Muslim pilgrims reach to touch the golden doors of the Kaaba as they perform the walk around the Kaaba (Tawaf) at the Grand Mosque in the Saudi holy city of Mecca early morning. Nov. 9, 2010. The Kaaba, Islam's holiest site which stands in the centre of Mecca's Grand Mosque, contains the holy Black Stone which is believed to be the only piece remaining from an altar built by Abraham.
Credit: Mustafa Ozer
Share

Despite being emotionally scarred by the death of two childhood friends during last year's Hajj stampede, Muhammad Sani has still returned to Saudi Arabia for another pilgrimage.

The Nigerian pharmacist, 46, says his faith remains unshaken even after the deaths of at least 2,297 pilgrims during the Hajj stoning ritual last Sept. 24.

A year after the worst disaster in Hajj history, Sani is among more than 1.4 million foreign pilgrims expected at this year's pilgrimage after the kingdom quietly made safety improvements.

The event, one of the largest gatherings in the world, starts on Saturday.

"I miraculously escaped unhurt, but the incident has left a scar in my heart that will never heal," Sani says after arriving in the kingdom with his wife.

He and others are making the journey reassured within themselves that death can come anywhere — stampede or not — and with the expectation that safety has improved.

The Hajj is one of the five pillars of Islam, which capable Muslims must perform at least once, marking the spiritual peak of their lives.

No one claimed responsibility, but ISIS adherents have carried out other blasts in the kingdom.

He said the Saudis did not prosecute those at fault for the stampede, accused them of showing no remorse, and said they "refused to allow an international Islamic fact-finding committee".

This will be the first time in almost three decades that pilgrims from the world's major Shiite power will not join the Hajj.

Iran sent 60,000 pilgrims last year but in May the two sides — at odds over a series of regional issues — said they could not agree on their participation this time.

One contentious matter was security following the stampede.

Saudi Arabia says that Iranian pilgrims are still welcome if they come from other countries.

The stampede happened as pilgrims made their way to the Jamarat Bridge for a symbolic stoning of the devil in Mina, east of Mecca's Grand Mosque, Islam's holiest site.

Pilgrims blamed the stampede on police road closures and poor crowd control, but Saudi officials said pilgrims had not followed the rules.

Although Riyadh stuck with a death toll of 769, data from foreign officials in more than 30 countries gave a tally almost three times higher.

Saudi Arabia announced an investigation, but no results have ever been revealed.

The response contrasts markedly with what happened following another tragedy just before last year's Hajj.

Officials have put 14 people on trial, accused of negligence and other charges after at least 109 pilgrims and others died when a construction crane collapsed on the Grand Mosque.

"They have not been transparent about it as they have with the crane incident, and that would only make you conclude that the blame was more on the authorities than on the pilgrims," says a source closely following the stampede case.

After the tragedy, King Salman, who holds the title "Custodian of the Two Holy Mosques," ordered "a revision" of Hajj organisation.

Public statements and Saudi press reports show that changes have been made even though no one was ever blamed for the stampede.

The Arab News daily reported that roads in the Jamarat area were expanded and some pilgrims' accommodation relocated.

More space was freed up when government facilities were moved out of Mina, Saudi Gazette reported.

The Ministry of Hajj and Umra is also taking a high-tech approach to improving safety.

For the first time, pilgrims will receive electronic bracelets storing their personal information.

The timing of the Jamarat stoning has been restricted, and the Hajj ministry says surveillance cameras and other electronic controls will monitor crowd flow, comparing it with computer projections.

Pilgrims say they have already detected other changes, including speedier processing at the airport.

"We notice a huge improvement in the services and care," says Asi Wat Azizan, an official with the Thai delegation.

"We are not afraid of any accidents," says Najwa Hassan, a Sudanese pilgrim.

Oumou Khadiatou Diallo, a Malian pilgrim who survived the stampede but saw seven people die around her, says God has called her to return despite the trauma she suffered.

"I hope that the safety is going to be improved," she said before leaving Bamako for Saudi Arabia, burdened by her memories.

"I think of all the dead from last year. What I saw often comes back to me, and that hurts."

Ian Timberlake contributed to this story.