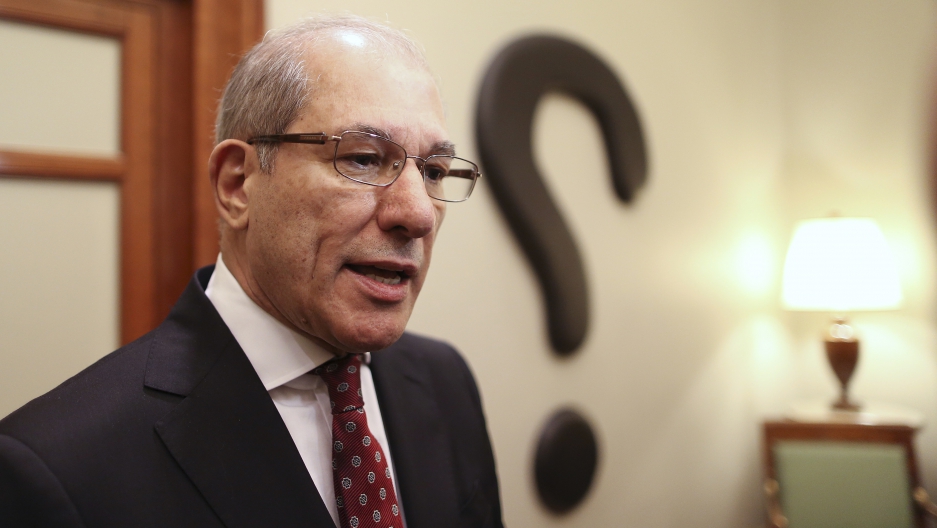 Ahmet Uzumcu, head of the Organisation for the Prohibition of Chemical Weapons, speaks during an interview in Rome January 16, 2014. The removal and destruction of the most dangerous agents in Syria's chemical weapons arsenal may not be completed until the end of June, the head of the U.N. chemicals watchdog said on Thursday.

The world's chemical weapons watchdog said Wednesday it was "disturbed" by the alleged use of toxic chemicals in Aleppo after dozens of people had to be treated for breathing problems in the Syrian battlefront city.

"We are disturbed by the recent allegations of the use of toxic chemicals in Aleppo," said a statement by the director-general of the Hague-based Organisation for the Prohibition of Chemical Weapons, Ahmet Uzumcu.

"Such allegations are taken very seriously. The use of chemical weapons by anyone, anywhere and under any circumstances is unacceptable," he added in a statement.

More than 70 people were left choking on Tuesday after regime helicopters dropped barrel bombs on a rebel-held district of the war-ravaged city, the Syrian Observatory for Human Rights said.

The bombs left people in need of treatment, the British-based monitor said, adding most were civilians.

The opposition Aleppo Media Centre said on its Twitter account that the Sukkari neighbourhood was the target of a chlorine attack.

Observatory head Rami Abdel Rahman was unable to confirm the claim, but said no one was killed in the strikes.

A Sukkari resident told AFP a "very strong smell" filled the neighbourhood after it was hit by a barrel bomb and that he and others had difficulty breathing.

Both sides in Syria's complex civil war have traded accusations of attacks against civilians and use of unconventional weapons including chlorine and mustard gas.

Last month, an investigative panel set up by the UN Security Council said in a report that President Bashar al-Assad's forces had carried out at least two chemical attacks, one in 2014 and another in 2015.

But Syria's ally Russia said it had "very serious questions" about the report while the Syrian envoy to the world body, Bashar Jaafari, rejected the findings.