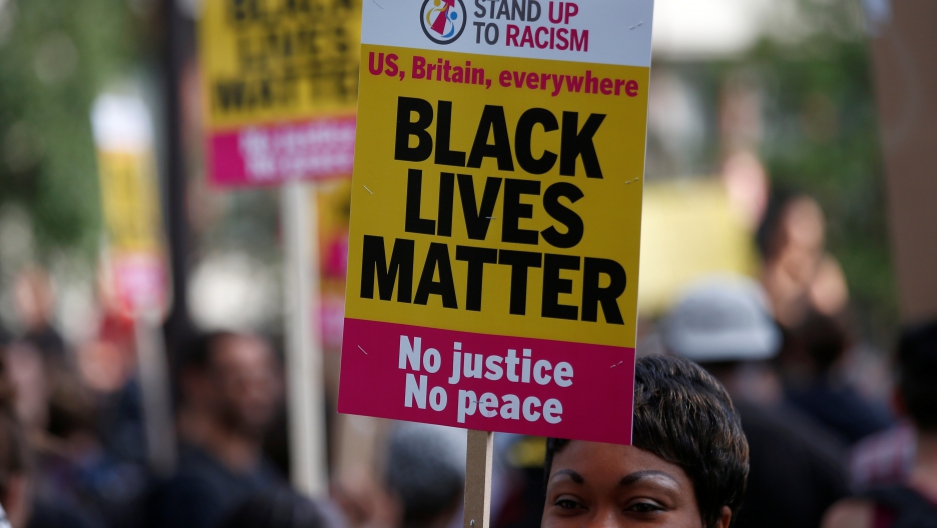 A Black Lives Matter protest in London on Aug. 5.

The Black Lives Matter movement may have started in the United States, but local versions are spreading across the world. And as the movement expands, so does the message.

In Britain on Tuesday, members of Black Lives Matter UK gained access to London City Airport, where they chained themselves together on the runway in protest. Flights into the capital were diverted for several hours. Nine activists were arrested.

It followed a similar demonstration on a road outside Heathrow, London’s largest airport, last month.

In videos released online, Black Lives Matter UK has also drawn attention to the migrant crisis in the Mediterranean. They argue that this is another area where black people are disproportionately victimized by Western governments.

Joseph Harker, the Guardian's deputy opinion editor and a former editor of the Black Briton newspaper, isn't surprised that BLM has grown in Britain. “It has been such a successful movement in the States ... so it's natural that its success has led people to want to reproduce that," Harker said.

He sees parallels between the black British experience and the situation for African Americans, particularly when it comes to racism. But he believes there are essential differences. "The backdrop in Britain is very similar — the black population in Britain is traditionally a Caribbean population, which was also enslaved for generations," he says. "But there's not the same levels of shootings of unarmed people. So it's more difficult to get that same level of engagement in Britain."

Harker also questions whether a new environmental or migration agenda will resonate with the wider black community in the UK. "If you asked a hundred black British people what their top 10 issues are in terms of racism and discrimination in Britain, environment and climate change will come very low on the list — if at all," he says.

The UK is the biggest per-capita contributor to temperature change & among the least vulnerable to its affects. pic.twitter.com/Bb5SmKWyt6

Critics of Black Lives Matter UK have also noted that most of the activists involved in the runway protest appear to be white. The group has posted a series of tweets that appear to respond to this.

"UKBLM is and always has been black led," said one. "Today's protest is an example of white allyship under black leadership," said another.

"There's a need for white people to take responsibility in a society that privileges them through racism and anti-black racism in particular."