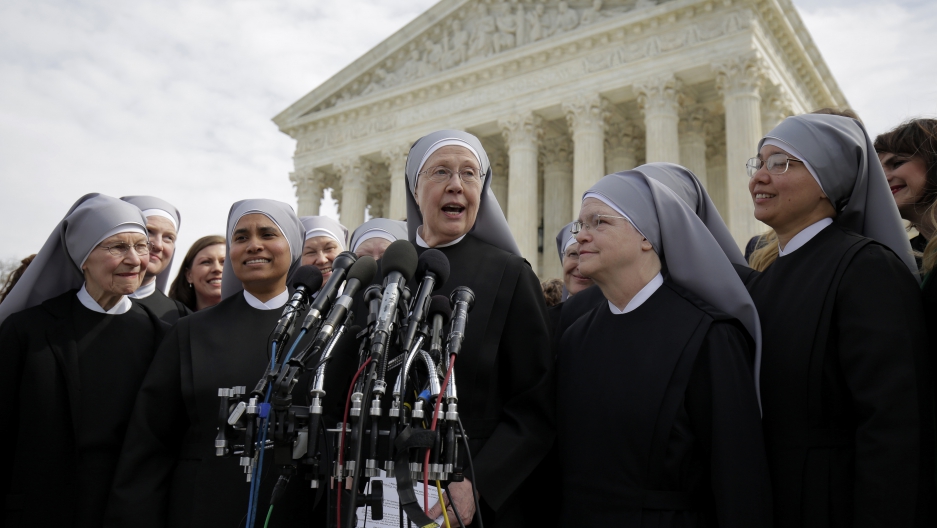 Sister Loraine McGuire with Little Sisters of the Poor speaks to the media after Zubik v. Burwell, an appeal brought by Christian groups demanding full exemption from the requirement to provide insurance covering contraception under the ACA.

Ninety-nine percent of reproductive-age US women who have had sex have used contraception at some point in their lives. And thanks to the Affordable Care Act’s contraceptive mandate, more people have access to contraception than ever before.

As OB-GYNs, we help patients choose the contraceptive method that best suits them and explain how they work, their failure rates and potential side effects.

But we also know that patients (and the public) get a lot of information about health and medicine from the media in general, and TV in particular. How the media frame stories and whom they choose as sources might influence how people view an issue.

Note: Elizabeth W. Patton received funding from the Robert Wood Johnson Clinical Scholars Program to support the research study cited. Michelle Moniz does not work for, consult, own shares in or receive funding from any company or organization that would benefit from this article, and has disclosed no relevant affiliations beyond the academic appointment above.

So we decided to examine how contraception was covered during the nightly news shows on the big three television networks (ABC, CBS and NBC). And it turns out these stories often portray contraception as a political or social issue, which means that actual medical information about contraception rarely makes it onto the air.

In our study, published in the journal "Contraception," we looked at a total of 116 stories about contraception that aired on the nightly news programs for ABC, CBS and NBC between January 2010 and July 2014. This period covered the months leading up to the signing of the ACA through to the Supreme Court’s ruling in Hobby Lobby v. Burwell in June 2014, a case in which a privately owned company’s owners (Hobby Lobby) argued that the ACA’s contraceptive coverage requirement violated their freedom of religion.

For each story, we determined what birth control methods were covered, the people interviewed or quoted in each story and what information the story included.

We found that most stories focused on political or social aspects of contraception, such as controversies over contraceptive coverage by insurance plans or over the counter access to contraception.

Fewer than one-third of stories featured any medical information at all. In fact, the information we as doctors consider most critical – like the failure rate of a method, how to use it and potential side effects – was missing from nearly all TV news stories about contraception.

LARC methods are recommended as a first choice contraceptive for most people by the American College of Obstetricians and Gynecologists and the Centers for Disease Control and Prevention. They are the most effective forms of reversible contraception. But these methods were mentioned the least often. IUDs appeared in only 4 percent of stories and implants in only 1 percent.

While our study did focus on a politically charged time period around the ACA, coverage patterns didn’t seem to change when we looked at stories about contraception unrelated to the ACA. We saw similar topic and source selection in these stories too. 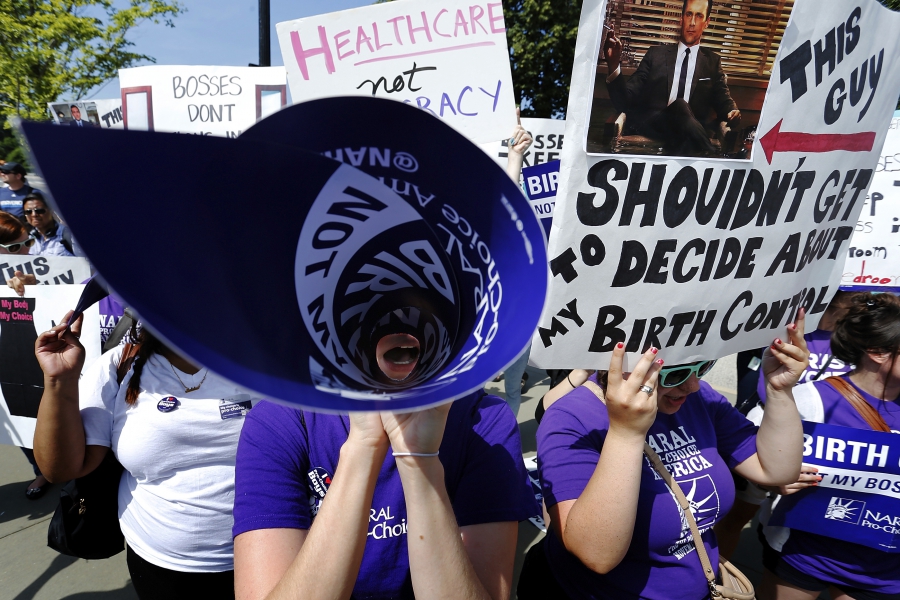 Demonstrators in support of abortion and contraceptive rights chant in support of their cause after the Hobby Lobby ruling outside the U.S. Supreme Court in Washington June 30, 2014.

In 2015 almost 24 million people watched the nightly network TV news. The median age of the nightly TV news audience skews older, ranging from 45 for ABC to 52 and 53 for NBC and CBS, respectively. Women use contraception, however, throughout their reproductive years, from their teens to their 40s. In fact, based on the most recent national data, more women in their 30s and 40s are using contraception than their younger counterparts.

Even if younger women aren’t tuning into these broadcasts, their social networks may well include people who do. Research suggests that many younger reproductive aged people get health information and news from their social networks, so TV news content may impact many more people than those who view it directly.

While most methods of contraception are intended for women, that doesn’t mean contraceptive access is only a women’s issue. It also affects men who have female partners, family and friends who share information and advice, and all of us as citizens who are affected by government policies around contraception.

Framing contraception primarily as a political or social issue rather than as a medical issue often means that TV news stories don’t cover the most effective contraceptive methods and information on method use, benefits and harms.

It also leaves some of the most knowledgeable sources about contraception, medical professionals like us, on the sidelines in favor of comment from political, advocacy group and church leaders.

Ultimately, this could deprive the public of vital health information and understanding about contraception.

Providing context is part of the media’s job

Our research identified key gaps in nightly network TV news coverage of contraception that may affect the information some people in the United States are getting about birth control.

But these gaps aren’t insurmountable.

Research analyzing media coverage of the HPV vaccine and the medication tamoxifen for breast cancer treatment and prevention found higher rates of medical professionals being used as sources. Coverage of these issues shows that it is possible to highlight both the social and medical aspects of a news story to convey the full context to the audience.

Providing context is critical to helping viewers understand topics and events in the news. Contraception is multifaceted, and the social and political angles shouldn’t be ignored in media narratives. But the medical and public health aspects of contraception are critical to understanding this issue, and are too important to leave out.