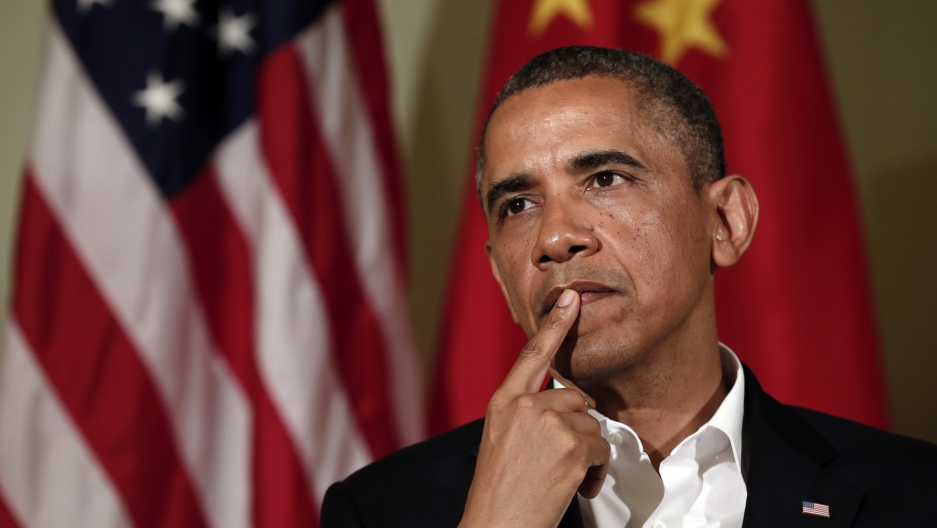 U.S. President Barack Obama listens to a response from Chinese President Xi Jinping at The Annenberg Retreat at Sunnylands in Rancho Mirage, California, on June 7, 2013.

President Barack Obama begins his 11th and final presidential trip to the Asia-Pacific in earnest on Friday, visiting China to nurture what has become arguably the world's most important relationship and cementing an eight-year "pivot to Asia."

After a series of US stops outside Washington, the outgoing US president jets in to the picturesque Chinese city of Hangzhou where he will take part in his final G20 meeting.

On the second leg of the trip he will become the first US president to visit Laos —site of a vast, secret US bombing campaign during the Vietnam War — for a meeting of Southeast Asian leaders.

Amid the week-long glut of summits, the White House sees an opportunity to burnish Obama's legacy as America's self-proclaimed "Pacific president."

The centerpiece may be an "extensive bilateral meeting" between Obama and Chinese President Xi Jinping, on the shores of Hangzhou's scenic West Lake.

Xi's rise to power has been a defining element of US-China relations during Obama's eight- year tenure.

In Xi, the White House sees a Chinese interlocutor as powerful as any since Deng Xiaoping, who ruled China from 1978 to 1989 — quick to quell dissent at home, assertive in the region and keen to project Chinese power around the world.

"Xi is a different kind of actor, he has more leeway than past Chinese leaders," says Jeffrey Bader, who was Obama's top Asia adviser during his first years in the White House.

That has provided opportunities, as well as areas of conflict associated with China's growing assertiveness, not least in the South China Sea, where the country has claimed a swath of territory.

The White House has tried to harness Xi's autonomy and decisiveness to avoid unproductive meetings filled with pleasantries, interminable translations and rote disputes over Tibet or Taiwan.

"Obama has understood that we can expand cooperation and manage differences," says one Chinese official, adding, "we are neither friends nor enemies."

Less stuffy tete-a-tetes like those at the Sunnylands retreat in California, or at West Lake "allows the two leaders to have a candid exchange of views," former Australian prime minister Kevin Rudd, a China expert and Mandarin speaker, told AFP.

"It acts as an important clearing house for the issues. That is particularly important in China, where any major decisions relating to the US-China relationship have to be made by President Xi."

Today Beijing is active from Sudan's deserts to Panama's ports and on issues from global macroeconomics to public health.

"One of the most profound changes under the Obama administration was its embrace of the global nature of the US-China relationship," says Evan Medeiros, who worked in Obama's National Security Council and until last year was Obama's top Asia adviser.

In Hangzhou, Obama and Xi will play a now familiar balancing act, talking up global cooperation while managing Asia-Pacific rivalries.

They are expected to joint "ratify" a global climate deal agreed in Paris last December and made possible by a convergence of US-China interests.

But China's claims on the disputed South China Sea remain a point of deep contention.

Obama's critics at home, as well as some allies in the region, have questioned whether the administration could have done more to prevent China's territorial claims.

Medeiros noted that any action to restrain China would have required "major confrontation."

He also dismissed the notion that the United States should ditch engagement and treat China as nothing but a competitor.

"If you decide that China is a strategic competitor and this should be the shaping issue... you better prepare for a Cold War-type commitment vis-a-vis China, for subordinating all other issues to it — including for instance the battle against terrorism, interest in the European project."

In Vientiane, Obama will try to shore up another pillar of his "pivot to Asia," engagement with Southeast Asian nations.

Obama's predecessors ducked summits of the Association of Southeast Asian Nations (ASEAN), but the 44th president has made a point of attending.

Relations have been helped by China's assertiveness, which has spooked countries across the region, making them more friendly to the US with its military might.

Ties have also warmed due to Obama's willingness to engage with Myanmar, the country formerly known as Burma.

He has pushed for a trans-Pacific trade pact that languishes in Congress, causing consternation in signatory countries from Japan to Singapore.

Obama will set out the rationale for his strategy and the strategic importance of that pact in a speech in Laos, says senior adviser Ben Rhodes.

"I'll think he'll talk about how far we've come in shaping an architecture in the Asia-Pacific for the United States to lead and to be at the table in forums like ASEAN and the East Asia Summit," Rhodes says.