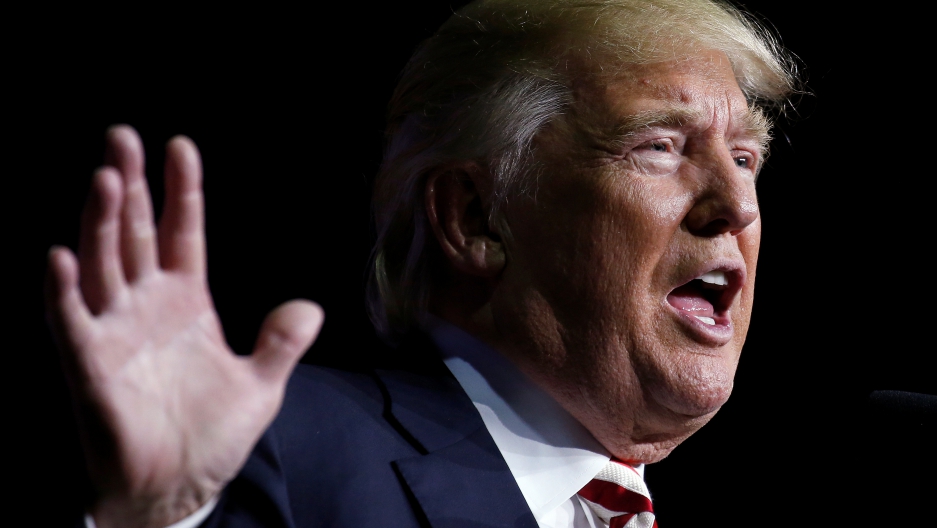 Donald Trump says people don’t even talk about the issue. But he does. He calls them "criminal aliens" — undocumented immigrants with criminal records living in the United States. And he says there are 2 million of them.

“Day one, my first hour in office, those people are gone,” the Republican presidential nominee said.

“According to federal data, there are at least 2 million, 2 million, think of it, criminal aliens now inside of our country," Trump said. "Two million people, criminal aliens. We will begin moving them out, day one, as soon as I take office."

So, how accurate is that figure? It's hard to say with much precision, considering we're talking about a population that's largely living in the shadows.

Michelle Mittelstadt of the Migration Policy Institute, which describes itself as an independent, non-partisan think tank in Washington, DC, says her organization looked at numbers from the US Department of Homeland Security and came up with a different estimate from Trump's 2 million.

“We estimated that there are 820,000 unauthorized immigrants in the United States who’ve ever been convicted of a crime,” Mittelstadt says.

The research she’s referring to looked at the estimated 11 million people living in the US without legal authorization. And it determined that 820,000 had some kind of criminal conviction.

The 2 million figure cited by Trump may have come from the Center for Immigration Studies, another Washington, DC-based think tank that advocates tighter restrictions on immigration. Its estimate appears to be including green card holders.

Green card holders are legal residents of the US and they number about 13 million people. Including them in a tally of non-citizens with criminal records might account for Trump’s higher figure.

Trump accuses the Obama administration of failing to focus on this group of undocumented immigrants and to taking seriously the threat they pose to the American public.

“We will terminate the Obama administration's deadly non-enforcement policies that allow thousands of criminal aliens to freely roam our streets, walk around, do whatever they want to do. Crime all over the place. That's over, that's over folks,” Trump said on Wednesday.

“By prioritizing for removal criminal aliens, gang members, recent entrants, which were three of the categories that Mr. Trump mentioned last night, those actually are already groups of people who have been identified for removal,” Mittelstadt says.

“In some ways, it’s a continuation of the policy that is already in place.”

In 2014, President Obama made removing undocumented immigrants convicted of a felony a top priority for Immigration and Customs Enforcement. But Mittelstadt says this enforcement focus goes back about a decade.

The number of deportations from the US hit its peak in 2013, with more than 435,000 people being removed from the country, according to the Department of Homeland Security. Almost 200,000 of those people had been convicted of crimes.

Here’s a comparison that might be useful for understanding all these figures.

Let's assume Trump was exactly right, and there really are 2 million so-called criminal aliens roaming the streets of America — how does that compare to the larger US population?

When you include everyone who’s been arrested or detained, and not necessarily convicted of a crime, about 30 percent of the US adult population is thought to have a police record.

That’s about one in three adults.

Read more: Fact checking the migration ‘crisis’ in the US