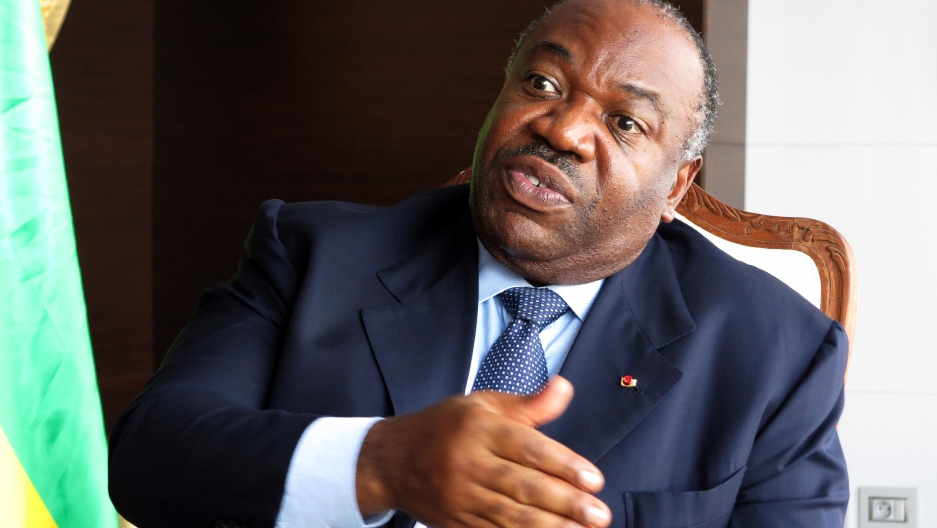 Gabon President Ali Bongo Ondimba speaks during an interview in Libreville, Gabon, on May 22, 2014.

Police arrested 1,000 people as security forces fanned out across Gabon's capital Thursday, following a night of riots and looting that erupted when President Ali Bongo was declared winner of disputed polls.

Thousands of angry protesters poured onto the streets of Libreville late Wednesday, accusing the government of stealing the election after Bongo won a second term by a razor-thin margin over rival Jean Ping.

His victory is set to extend the Bongo family's almost 50-year rule over the small, oil-rich nation.

Gunfire crackled across the city and plumes of smoke billowed from the torched parliament building as protesters clashed with heavily armed security forces.

Ping said two people were killed and 19 hurt in a raid against his headquarters early Thursday, and the national police chief told AFP that more than 200 people had been arrested across the city for looting.

But by mid-morning, security forces had sealed off the city center, which was calm and otherwise deserted, with troops, police and anti-riot squads patrolling the streets.

Interior Minister Pacome Moubelet-Boubeya said between 600 to 800 people had been detained in Libreville and 200 to 300 in the rest of the country.

Police chief Jean-Thierry Oye Zue said six officers had been killed in the post-vote riots and agreed there were "very probably" civilian injuries "given the violence with which they attacked us."

But he declined to give a total number of fatalities, saying "I cannot tell you that."

A Red Cross worker who gave his name as Gildas said one of 15 people injured who was brought in by an army truck had died on Thursday.

It was not immediately clear where Ping — a veteran diplomat and former top African Union official who had earlier declared himself the poll winner — had taken refuge.

A European diplomat said he was safe, however.

Internet communications remained cut and the capital scarred by the night of rioting.

The parliament building's facade was blackened by fire and its windows were smashed. Protesters had torn down its huge main gate and torched a sentry box at the entrance.

On the city's main artery, the Boulevard Triomphal — the location of numerous government institutions and foreign embassies — burnt-out buildings and cars could be seen, while makeshift barricades were still smouldering.

The army searched Ping's headquarters "from top to bottom," said an opposition leader, Didjob Ding Duvungui, who was being held for questioning.

A government spokesman said the operation was to catch "criminals" and "looters and thugs" who had earlier set fire to the parliament building.

"We have said that the people of Gabon are in danger. They (the international community) should come and help us against the clan (of Bongo)," Ping told AFP.

The results of the presidential election — which gave Bongo 49.8 percent to Ping's 48.23 percent (a gap of less than 6,000 votes) — remain "provisional" until approved by the constitutional court.

The opposition described the election as fraudulent and called for results from each of Gabon's polling stations to be made public to ensure the credibility of the overall outcome — a demand echoed by the United States and European Union.

Any appeal by Ping would likely focus on disputed results in Haut-Ogooue province, the heartland of Bongo's Teke ethnic group.

In Saturday's vote, turnout was 59.46 percent nationwide but soared to 99.93 percent in Haut-Ogooue, where Bongo won 95.5 percent of votes.

"It's going to be difficult to get people to accept these results," one member of the electoral commission told AFP, asking not to be named.

"We've never seen results like these, even during the father's time," he added.

Bongo took power in 2009 in a violence-marred election that followed the death of his father Omar Bongo, who had governed the oil-rich former French colony for 41 years.

One third of Gabon's population lives in poverty, though the country boasts one of Africa's highest per capita incomes at $8,300 (7,400 euros) thanks to pumping 200,000 barrels of oil a day.

Bongo, 57, campaigned under the slogan "Let's change together", playing up the roads and hospitals built during his first term and stressing the need to break with the bad old days of disappearing public funds and suspect management of oil revenues.