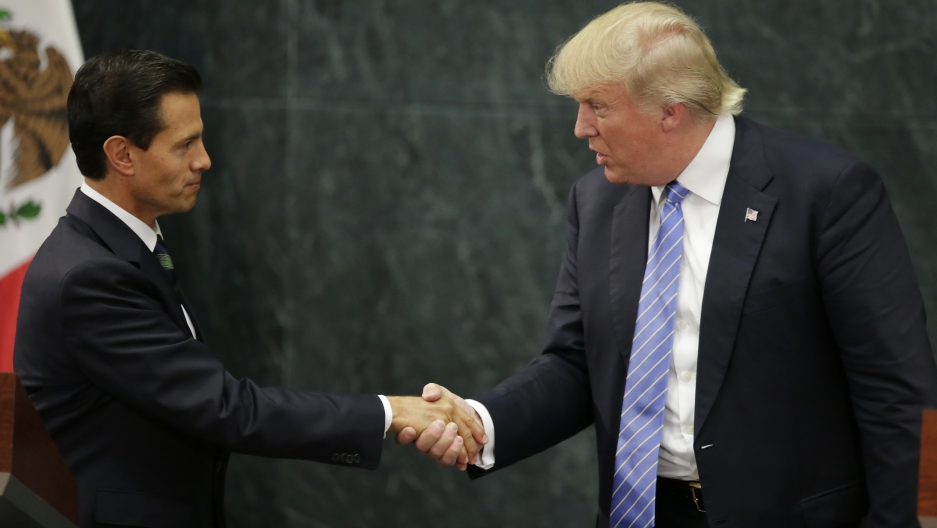 One was a calm aspiring statesman speaking at a news conference alongside Mexican President Enrique Pena Nieto.

"We are united by our support for democracy, our love for our people, and the contributions of millions of Mexican Americans to the United States," Trump said in Mexico City. "And I happen to have a tremendous feeling for Mexican Americans — not only in terms of friendships, but in terms of the tremendous numbers that I employ in the United States. And they are amazing people. Amazing people."

Then, hours later, Trump was in Arizona for a rally.

The tone, and the message were different.

"We will begin working on an impenetrable, physical, tall, powerful, beautiful, southern border wall," he said.

Trump added that Mexico will pay for the wall, "100-percent."

President Pena Nieto is adamant that Mexico won't. (Although, the two disagreed separately about whether the wall even came up in their private talk.)

It was quite a day.

"It was despressing," says Mexico City resident Gabi Perez. "I don't have a better word."

But Perez says she was more disappointed with Pena Nieto for going down this path. "With Trump, you don't expect anything from him. He's made it clear where he stands. I think what was very disappointing and what made us incredibly angry and sad was watching our president be a part of this whole circus," she says.

Perez feels a little helpless in regard to the US election. She can't do anything about it. She can't vote, of course.

"What we can do is hopefully have a strong leadership here who are very clear about why we would find [meeting with Trump] offensive and how it isn't acceptable," she says. "And I don't think we've had that."

She says the kind words Trump spoke about Mexican Americans didn't provide any consolation. "The only acceptable thing was an apology. And anything less than that was not going to be of interest to us."