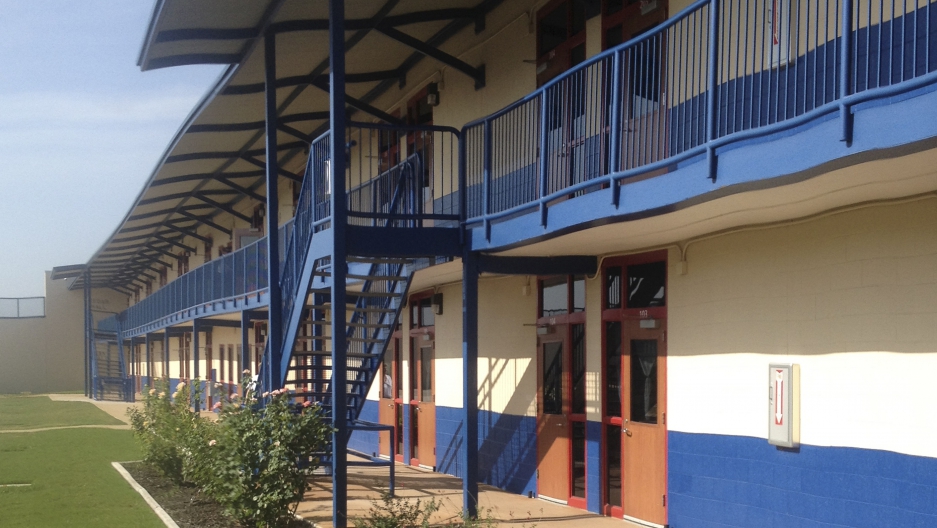 An exterior photo shows a privately operated US government detention facility in rural Karnes County, about 60 miles southeast of San Antonio, Texas, July 31, 2014. It has been operated by GEO Group since 2010.

The Department of Homeland Security announced on Monday that it would follow the lead of the Department of Justice and re-evaluate its relationship with private prison companies that operate immigration detention facilities around the US.

Immigration and Customs Enforcement used 637 detention facilities last year. Almost 325,209 people were processed through these facilities, according to data collected by the Transactional Records Access Clearinghouse at Syracuse University. Most were deported, but others had a lawful right to stay in the country, or were released on bond. Though exact numbers are difficult to come by, it’s estimated that about 70 percent of the immigrant detention facilities are privately operated.

“It’s something that advocates have been pushing for and hoping for for quite some time,” says César Cuauhtémoc García Hernández, an immigration and criminal law professor at the University of Denver.

However, not all advocates are satisfied. Amy Fischer is the policy director at RAICES, an organization that provides legal services to the immigrant community and refugees in Texas. She says she was frustrated when she heard about Johnson’s statement.

“I know that no review is needed,” says Fischer. “The conditions are inadequate, they’re spending way too much money on a population that should not be detained.”

Garcia Hernandez says the future of detention centers could go in any of several directions if DHS decides to cut ties with these private corporations.

One possible outcome, he says, is DHS allowing local and state governments to operate detention centers and fill the vacuum that would be created by the elimination of private prisons.

Another possible alternative, says Garcia Hernandez, is DHS owning and operating the facilities themselves, like its Port Isabel Service Processing Center in Los Fresnos, Texas.

“They might purchase the existing facilities owned by CCA and GEO Group,” says Garcia Hernandez. “Or they might just build other facilities.”

Fischer says the potential switch from privately run facilities to publically run ones wouldn’t change much.

“We have also seen ICE use public detention facilities and still have the same issues that exist in private facilities,” says Fischer. “One very strong example of this is the Berks County Family Shelter in Leesport, Pennsylvania.”

Recently, 22 mothers went on a hunger strike at the Berks County facility in support of four mothers who have been detained with their children for more than a year.

Some of the women at the detention facility say they were told if they become weak from the hunger strike, then the government would have to take custody of their children.

Garcia Hernandez says private corporations like CCA and GEO Group are looking into expanding their non-custodial services, like ankle monitors, and collaborating with DHS to provide those services as well.

“They pay attention to trends in prison practices,” says Garcia Hernandez. “One trend that has been clear in the United States within the past two or three years is that policymakers at all levels have suddenly become aware of the fact that our gargantuan prison population is financially unsustainable.”

The use of ankle monitors on immigrants is also controversial, however.

“This is obviously better than putting someone in detention, however we believe there are much more just alternatives to detention,” says Fischer. “It has poor health effects and it’s really traumatizing for families to wear the ankle shackle at all times.”

John-Michael Torres is the spokesperson for La Union Del Pueblo Entero, LUPE, in the Rio Grande Valley of south Texas. The organization was founded by Cesar Chavez and believes members of low-income communities have the right and obligation to organize and advocate against issues that impact their lives.

Torres helped stop a proposed private immigrant prison from being built in McAllen, Texas, in 2013. He says he would like to see DHS only use detention as a last resort.

“We need to shift the conversation toward talking about what the alternatives are for detention because there are alternatives, because alternatives do work and we have the moral obligation to seek alternatives that treat people with dignity,” says Torres.

“Once the Department of Homeland Security was founded and immigration became a national security issue, the entire culture shifted to that of deterrence and enforcement and criminalization of immigrants,” says Fisher. "It’s time that our nation truly reflect upon and have a hard conversation whether or not that’s how we want to treat people that are arriving to our country.”

Garcia Hernandez says there’s almost no chance DHS would immediately end its contracts with private corporations. It’ll probably follow the DOJ model, not renewing contracts as they expire, he adds.

The possibility of DHS maintaining its ties with the private prison industry also remains. But Garcia Hernandez says that could have long-term ramifications.

“That will make it very difficult for future presidential administrations, in the near term, to engage in another wholesale review.”

DHS expects to make a decision about the future of its relationship with private prisons no later than November 30.