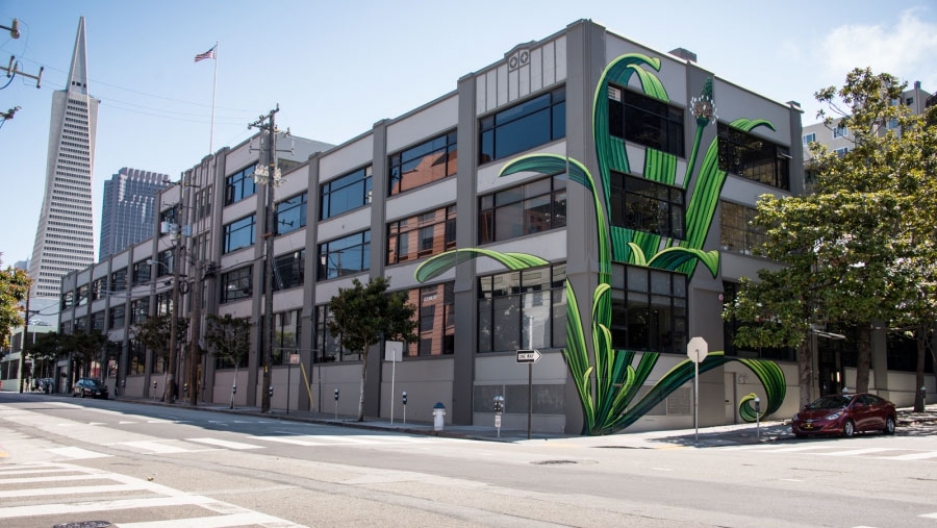 Mural artist Mona Caron uses city walls all over the world as canvases for her magnified portraits of wild plants.

If you’re wandering around, say, Sao Paulo, Brazil, or Athens, Greece, or San Francisco, California — you just might stumble upon a weed grown as tall as a building … on the building, that is.

Mural artist Mona Caron uses city walls all over the world as canvases for her magnified portraits of wild plants. She says they represent what survives at the margins of society. And she wants us to pay closer attention.

Caron lives in San Francisco, but hails from the Italian part of Switzerland. She started out her career doing sweeping bird's-eye views of cities, and has been known as the cityscape artist for a long time.

But then something happened a few years ago. She began doing the opposite — painting tiny things large. Specifically, weeds, the little wild plants that grow in cracks of sidewalk everywhere, the plants that people step on. "The less attention we pay it," Caron says, "the larger I’m gonna paint it!"

"I don’t paint dainty little grandmotherly botanical illustrations," Caron says. To her, weeds are plants that have power. 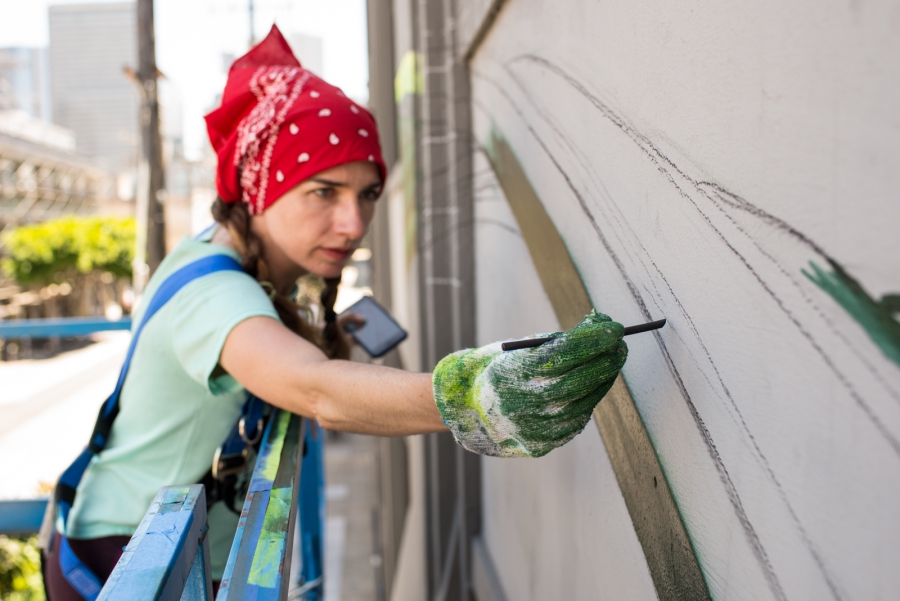 Artist Mona Caron paints a mural of a platago lanceolata in San Francisco.

And she has painted her giant weed murals now in dozens of cities worldwide. There’s a dandelion on the rooftop of a mosque in San Francisco, another giant dandelion in Switzerland, a stinging nettle in Barcelona. She even painted an unidentified weed that she found in one of the largest slums in Ahmedabad in the Indian state of Gujarat.

"And so it’s kind of funny," she points out, "how this idea seems to have no borders just like weeds themselves." Weeds are plants that have spread internationally because of globalization. Similarly, says Caron, this project has taken hold everywhere "because you don’t need much language to explain it."

From a motorized scissor lift 25 feet up in the air, Caron scratches charcoal lines on a bumpy beige wall, then sprays green paint from a can between the lines. She’s working on a Ribwort plantain — Plantago lanceolata — on a four-story office building in San Francisco’s Telegraph Hill neighborhood.

Towering off to the left you see the Transamerica pyramid. When she saw it, Caron thought, "You know what? I’m gonna rival that! I’m gonna put a plant there!"

She uses the word "weed" kind of provocatively. She knows it’s a derogatory term that can refer to invasive species or simply plants we didn’t cultivate or don’t want around.

Caron also knows that weeds often have medicinal or edible properties. But she says that’s not the reason she highlights them in her murals. "Really what I try to highlight," she says, "is this transgressive act of bringing life back to something that seemed to be dead." 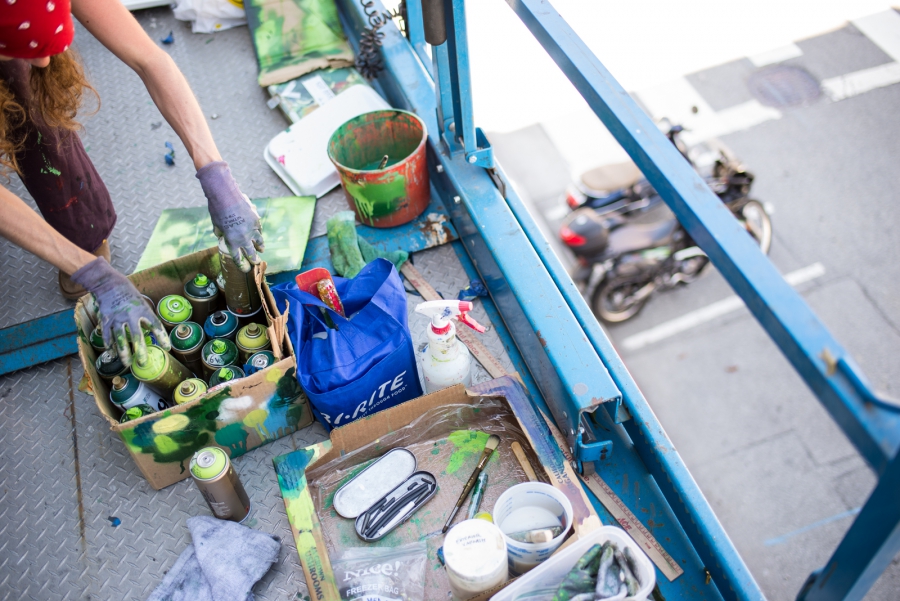 For example, in Union City, California, she picked the very first flowering plant that came back to the devastated terrain of a former superfund site. She said "Ok you’re the one. You’re the one who’s gonna be seven stories tall."

People often tell Caron that her plants look realistic. But she insists that they are not. She paints them from below at a heroic angle to make them more imposing. And she says people have stopped to ask her, "Wow what is that amazing plant? Is that some kind of orchid or something incredible?!" She tells them, "No, you just stepped on it."

Because in the end, Caron says, "any little bit of nature is actually incredibly beautiful if you take the time to look at it."