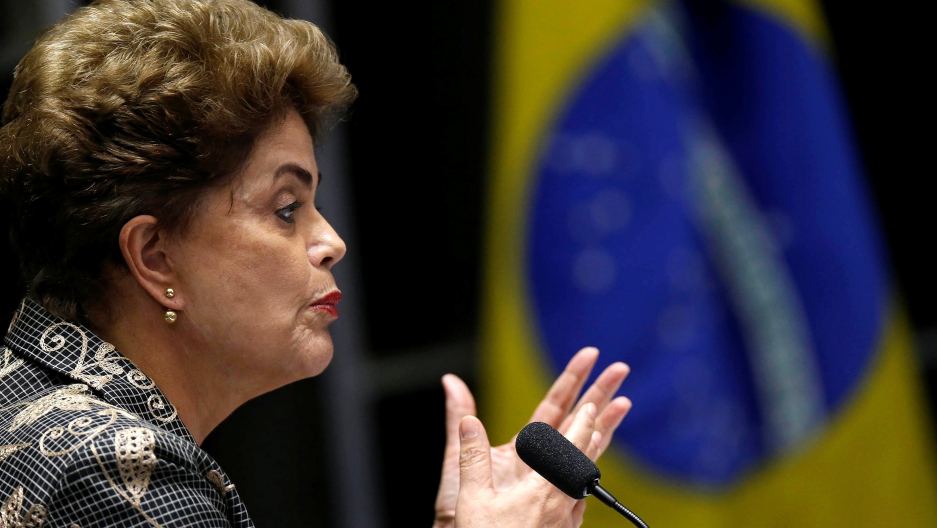 It was the moment Brazilians waited weeks for: Dilma Rousseff took the stand before the country's Senate to defend herself against impeachment.

Far more than a legal defense, Monday's 30-minute speech was an opportunity for Rousseff, Brazil’s first female president, to make one final plea against those seeking to depose her.

Dilma, as she's universally known in Brazil, is not famous for powerful speeches. But she rose to the occasion.

Defiant to the end, Dilma said she went to the Senate to look her accusers in the eye, and she did. Her speech was a litany of proud accomplishments, an angry denunciation of what she considers a “coup” and impassioned pleas to save Brazilian democracy itself. Close to tears at times, she kept her chin up and her energy high.

After that, she sat for more than 14 hours of senators' questions. On Tuesday, the Senate begins voting on whether to kick the leader, who was suspended in May for the trial, out of office for good.

Below are four highlights from Dilma’s address.

“I have heard harsh criticisms of my government, the mistakes that were made ​​and the policies and measures that were not adopted.

I welcome such criticism with humility. We all have faults and make mistakes. But my faults don’t include disloyalty or cowardice.”

2. Looking accusers in the eye

“I know that soon, and again in life, I will be judged. And it's because of my absolutely clear conscience about what I did, in the exercise of the presidency, that I have come personally before those who will judge me.

I came to look directly into the eyes of your excellencies and say, with the serenity of one who has nothing to hide, I did not commit any crime of responsibility. I have not committed the crimes of which I have been unjustly and arbitrarily accused.

Today, Brazil, the world and history are watching us and waiting for the outcome of this impeachment process.”

“[The alleged crimes are] only pretexts to overthrow, through an impeachment process without criminal liability, a legitimate government chosen in a direct election with the participation of 110 million Brazilians — the government of a woman who dared to win two consecutive presidential elections.

“We will all be judged by history. I have twice seen, firsthand, the face of death: When I was tortured for days and subjected to cruelties that made me doubt humanity and the very meaning of life; and when a serious and extremely painful disease could have shortened my life.

Today, I only fear the death of democracy.”

Young Dilma, facing her dictatorship accusers, who cowardly hid thr faces. She mentioned them in her speechpic.twitter.com/9hEh06tuQU #Brazil