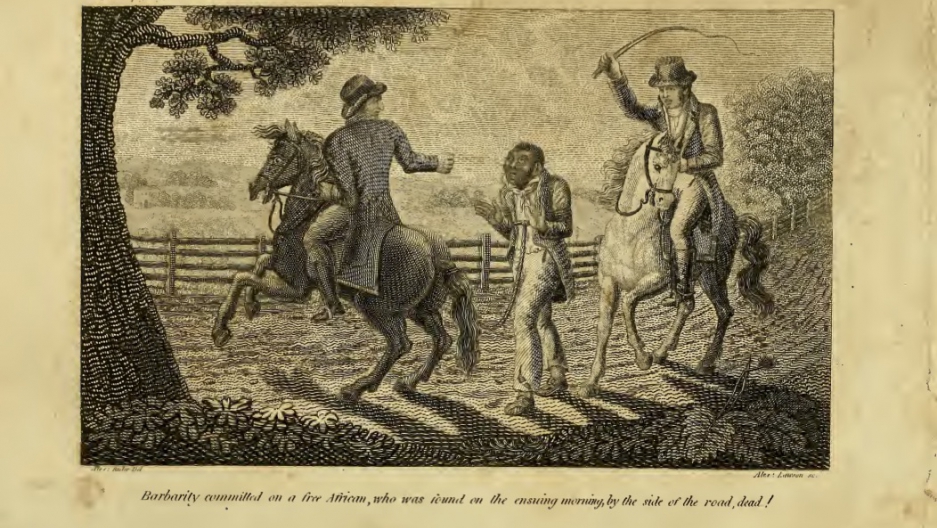 In this image of the domestic slave trade, two slave traffickers detain a free African American man whom they kidnapped to be sold into slavery. The image appeared in Jesse Torrey's 1817 book "A Portraiture of Domestic Slavery."

Five years from now, the use of private federal prisons to incarcerate Americans will be a relic of the past.

The Department of Justice announced this month that the United States will no longer use privately managed facilities to jail individuals. The practice won’t end immediately — but when the last of the Federal Bureau of Prisons’ contracts with private prisons lapses in 2021, officials promise that the official policy will be to either let those contracts expire or continue them only in a greatly reduced fashion.

One of those prisons is located on land that was once among the largest slave plantations in North Carolina. In 2000, Washington City Paper reported the Federal Bureau of Prisons contracted with Wackenhut Corrections Corp. — known today as the GEO Group — to build a new correctional facility on the site of the old Vann plantation, where 1,200 prisoners from Washington would be transferred to serve out their sentences. In their book “The Fox in the Henhouse: How Privatization Threatens Democracy,” authors Si Kahn and Elizabeth Minnich observed the cruel irony of sending more than 1,000 inmates — most of whom were African American — to prison on a former plantation:

“So a for-profit corporation is importing well over one thousand black men from the District of Columbia and imprisoning them on the same plantation where other African Americans, possibly including some of their own ancestors, were held as slaves 150 years ago.”

The possibility that African Americans are doing time on the same land where their ancestors were enslaved is a haunting echo of the past. But it’s not the only example of how private prisons are tangled up in the history of slavery.

From the 1820s to the 1850s, Washington was a point-of-transit for slave traffickers who operated private prisons to detain slaves.

The use of private prisons was a part of the domestic slave trade. President Thomas Jefferson, on March 3, 1807, signed a law making it illegal to import slaves into the United States. But buying, selling and trading slaves within the US was a huge business that continued until the Civil War brought about the end of slavery, almost 60 years later.

Read more: Is this really the end of private prisons? The Department of Homeland Security will likely continue to detain immigrants in contracted, for-profit facilities

In her book “Slavery in the District of Columbia: The Policy of Congress and the Struggle for Abolition,” Mary Tremain writes that opposition to the domestic slave trade in the District of Columbia can be traced to as early as 1802, when a grand jury in Alexandria County issued a statement decrying the presence of slave traffickers in the nation’s capitol. In fact, as historian Steven Deyle explains in his book “Carry Me Back: The Domestic Slave Trade in America,” criticizing the commerce in slaves in places like Washington, DC, became a cornerstone of the abolitionist movement.

According to the British and Foreign Anti-Slavery Society, "more extensive slave-dealers" had private prisons throughout the District of Columbia. In an 1841 volume about the domestic slave trade, they quoted the account of the editor of the Baltimore paper Niles Weekly Register, who reported that these "places of deposit are strongly built, and well supplied with thumb-screws and gags, and ornamented with cowskins and other whips, oftentimes bloody."

As opponents of slavery turned their attention to the domestic slave trade, they began to notice the private prisons in the nation’s capitol. Historian Robert H. Gudmestad writes in his book “A Troublesome Commerce: The Transformation of the Interstate Slave Trade” that the attempted suicide in 1816 of a woman named Anna, who jumped from the third floor of a well-known slave prison in Washington, George Miller’s Tavern, inspired Representative John Randolph of Virginia to make the first Congressional indictment of the domestic slave trade — and the private prisons that made it possible.

Randolph called for a committee to investigate the “inhuman and illegal traffic in slaves carried in and through the District.” In his explanation for why the committee ought to be established, he told Anna’s story: “A woman, confined among others, in the upper chamber of a three story private prison, used by the slave dealers in their traffic, was driven, by sorrow and despair at the idea of being separated from all that she held dear, to throw herself from the window upon the pavement.”

It wasn’t until the 1820s, however, that Congress began to mobilize around the issue. Charles Miner, a congressman from Pennsylvania, lambasted the domestic slave trade after a free African American man named Gilbert Horton was kidnapped in 1826 by a man who suspected him of being a runaway slave. He was imprisoned for nearly a month before he was released after personal references in Poughkeepsie corroborated his freedom.

He was kidnapped again and released later that year. The following year, five additional cases came to light in which African Americans were abducted without any proof that they were actually slaves. When Miner introduced a resolution describing the injustices occurring in the District’s slave trade, he highlighted that “Private and secret prisons exist in the district for carrying on the traffic in human beings.” 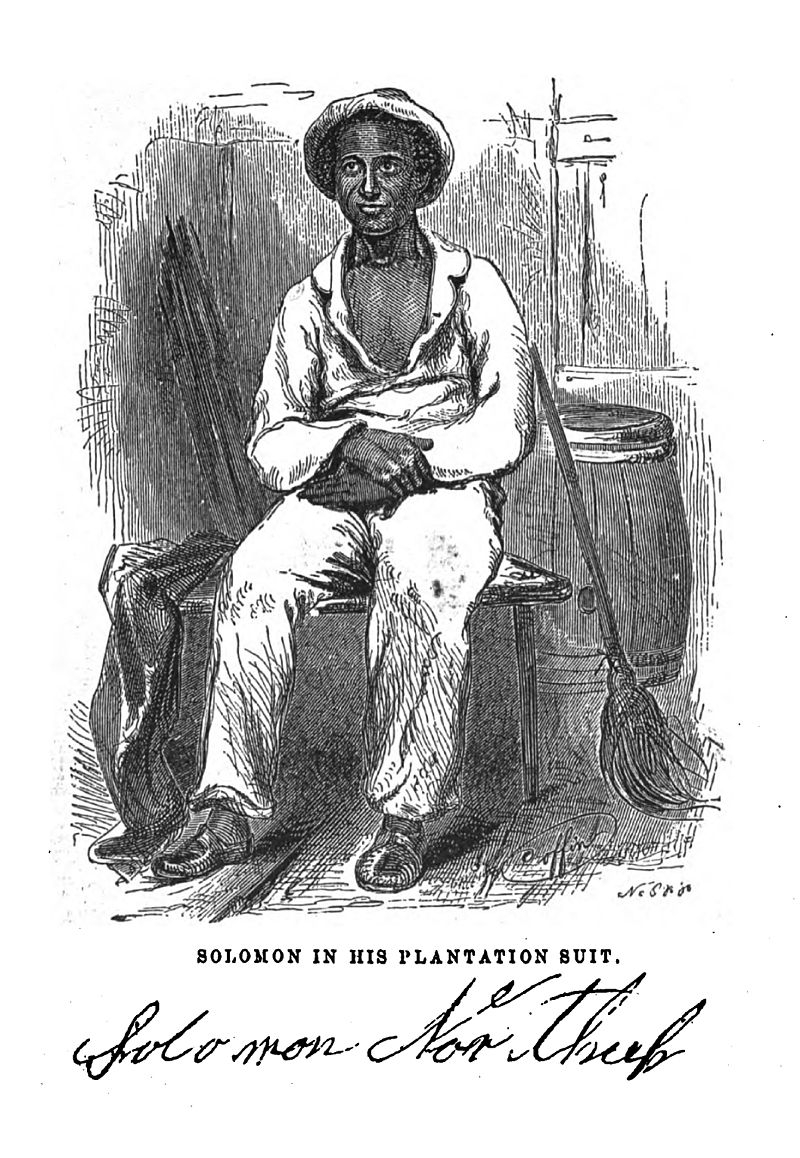 The Fugitive Slave Act of 1793 allowed slave owners to cross state lines in pursuit of escaped and runaway slaves. One side effect of the law was an increase in kidnappings of African Americans living in northern free states. Solmon Northrup, a free African American man who was kidnapped and sold into slavery in the District of Columbia in 1841, details his experience in the 1853 memoir "12 Years a Slave," adapted as a major motion picture in 2013.

The use of private prisons to detain slaves and free African Americans who were illegally apprehended became a recurring theme in calls to end the slave trade. On March 24, 1828, a group of residents who lived in Washington, DC, and neighboring Alexandria submitted a petition to Congress. They implored the country’s lawmakers to take action against the District’s role in the domestic slave trade.

In the next session of Congress, Representative Mark Alexander of Virginia, who was acting as the chairman of the Committee on the District of Columbia, raised the issue of private prisons once more. Public prisons, he noted, “are liable to public inspection.” Those inspections made it easier to identify free people who had been illegally taken into slavery, making it possible to notify legal authorities and affect their release. Private prisons were “used for the same purpose,” Alexander observed, “without the same reasons altogether in their favor.”

In other words, just as private prisons today have been proven to lack adequate oversight, abolitionists and members of Congres warned against the lack of public accountability in private prisons used in the domestic slave trade.

Despite attention to private prisons in DC, substantive reform was elusive. In a renewed push to end the slave trade in 1848, Representative John Crowell of Ohio doubled down on the lack of oversight and visibility of private prisons. Crowell knew of a private prison near the Smithsonian Institute on the National Mall. The Smithsonian, Crowell noted, “was founded here for the diffusion of knowledge among men, and in full view of this Capitol, and the stripes and stars that float so proudly over it.”

“But I fear, sir,” Crowell continued, “we shall not be favored with the information” about the injustices occuring occurring in that prison.

Two years later, in 1850, Congress passed a law that made the domestic slave trade illegal in Washington DC. And the 13th Amendment officially abolished slavery in 1865.

Yet private interests continued to play a major role in the prison industry. African Americans arrested in the Jim Crow South faced the prospect of convict leasing, a system of labor in which states leased out prisoners to private contractors who were more interested in boosting profit margins than ensuring safe working conditions and upholding the citizenship rights of African Americans.

Perhaps not for much longer.