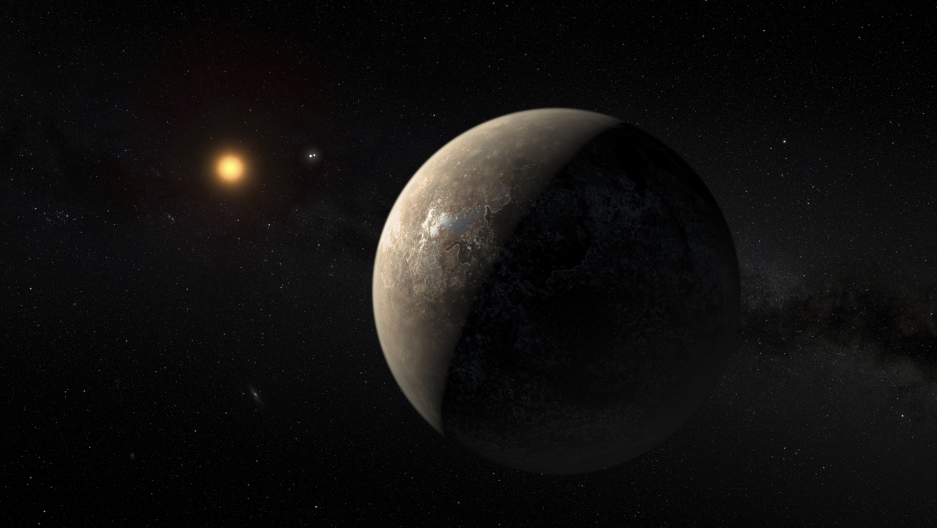 The planet Proxima b orbiting the red dwarf star Proxima Centauri, the closest star to our Solar System, is seen in an undated artist's impression released by the European Southern Observatory.

Earth has a new intergalactic neighbor.

On Wednesday, astronomers announced they have detected an Earth-like planet in a neighboring solar system in the so-called "Goldilocks zone” — areas of space that are neither too hot nor too cold for water to exist, something that would allow for the possibility of life.

The planet, called Proxima B, orbits a red dwarf star called Proxima Centauri. Lee Billings, an editor covering space and physics at Scientific American, says this exoplanet is “as close to us as it could possibly be.”

“That’s what makes this discovery so exciting,” he says. “We know there are tons of planets out there — we know that there’s quadrillions of planets in the Milky Way alone. Every single star has a planet, as far as we know, based on statistics, and now this is telling us that there may be a habitable one right next door.”

However, Proxima B isn’t exactly like Earth — for starters, its year is only 11 days long.

“That sounds crazy, because obviously we’re at a 365-day orbit around the sun, but its star is much, much smaller and cooler than our sun,” Billing says. “If our star was a 50 watt light bulb, this star would be a little Christmas tree light. Consequently, there are things like flairs that happen, which come out from the star and hit the atmosphere of this planet, if it has an atmosphere, which could cause problems. But it could be habitable — there could be things just like you and me there, in theory.”

Even though Proxima B is “right next door,” it’s still 4.2 light years or about 20 trillion miles away from Earth. But Billings says some private companies are already working to figure out how to reach it.

“A Russian billionaire named Yuri Milner has started a project called Breakthrough Starshot that is attempting to develop tiny nanoprobes that could maybe go at 10 percent or 20 percent the speed of light to visit the Centauri system,” Billings says. “That’s one possibility, and we can also look remotely through big telescopes to find out what’s there.”

Though scientists just discovered Proxima B, when looking into space, astronomers have long known the Centauri system before.

“What we’ve seen is just the wobble that [Proxima B] induces on its star as it tugs it back and forth as it whips around in its orbit — we’ve seen the wobble,” he says. “We could get pictures using a future generation of very large telescopes on the ground that are now under construction — these things have mirrors that are around 90 feet across. We can also potentially see it using various space missions, such as NASA’s James Webb Space Telescope, which is launching in 2018.”

Though it’s too far for humans to visit (at least in the near future) and a little difficult to see (at the current moment), Billings argues that Proxima B is an asset for scientists. Eventually, researcher will be able to see if the planet has water, or even oxygen.

“There will never be another potentially habitable planet that is closer to us in the sky,” he says.