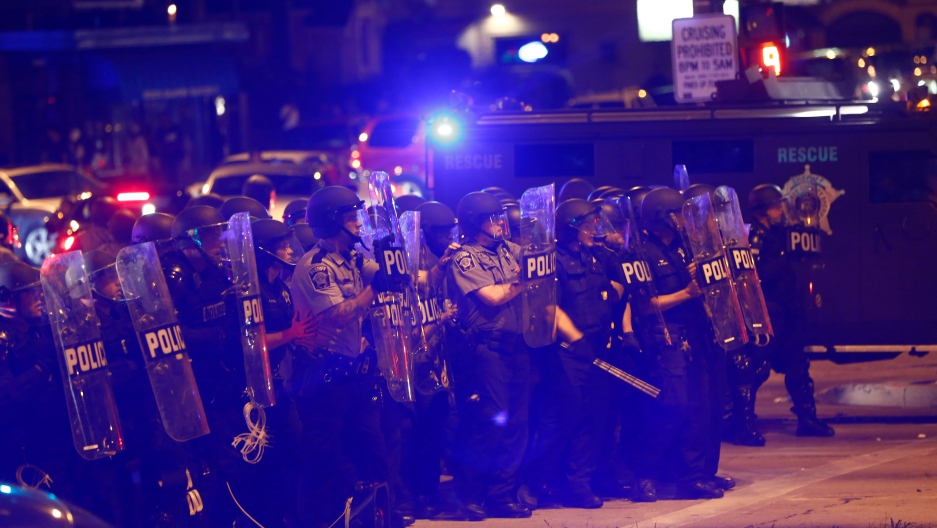 Police advance toward protesters during disturbances following the police shooting of a man in Milwaukee, Wisconsin, U.S. August 14, 2016.

The evening of August 13 started out as a reporting assignment for Aaron Mak, a Yale student and intern at the Milwaukee Journal Sentinel. It turned into a lesson about policing, race and protest in today's America.

Milwaukee police had just shot and killed a black man named Sylville Smith, and when Mak arrived at the scene, hundreds of people had already gathered in protest.

'You're Asian, Right? Why Are You Even Here?'

Aaron Mak wrote a piece for POLITICO about his experience covering the fatal shooting of a black man by police in Milwaukee, when protests escalated. Read the story.

"A lot of people noticed me in the crowd because virtually everyone there was African American. They asked me why I was there, and what interest I had in being there. Some of it was hostile, some of it was positive, like a kid came up to me and asked me how to speak Mandarin, so I gave her some words,” Mak says.

Soon after, the situation at the protest escalated, and part of the crowd became violent. Another intern had joined Mak to photograph the demonstration. He was white.

Some angry protesters chased the photographer, and Mak raced to help.

“When I yelled at him to get out of the area, people associated me with [him], so they started chasing me and eventually they caught up and tackled me and beat me up on the ground for a little while,” he says. “Eventually, another group of people came over and stopped the attackers and told them that I was Chinese or Asian and that I wasn’t white and the attackers let up and they left. It was interesting that I was also spared because of my race.”

Before this incident, Mak had debated his family many times about systemic racism in America — something that he thinks some Asian Americans can be unaware of. But when he told them about what happened at the protest, they surprised him with their reactions.

They were “a lot more open-minded about what had happened than I thought they would be,” he says.

“They didn’t take this incident as representative of the Black Lives Matter movement or African Americans in general. They saw it as an isolated incident that obviously is unacceptable, but that is also grounded in some very real issues that people face in America.”

Mak understands how complex protests like this one are and says he witnessed a lot of positivity at the demonstration, too.

“There were a lot of protestors there who helped us — who helped my friend too, even though he was white," he says. “I guess my overall image from that experience was that there are a lot more people who want to help, and who think of it as an inclusive movement for everyone."

And he's now looking at his job as a journalist in a new light, just as many news organizations are considering how best to cover police killings and the Black Lives Matter movement in the US.

“I need to be more conscious about my race and my role as a reporter; it wasn’t something I thought about before going into these situations,” he says. “I think being friendly and trying to connect with people at these rallies is going to be very important to gain the trust of people who might be skeptical of why I’m there."