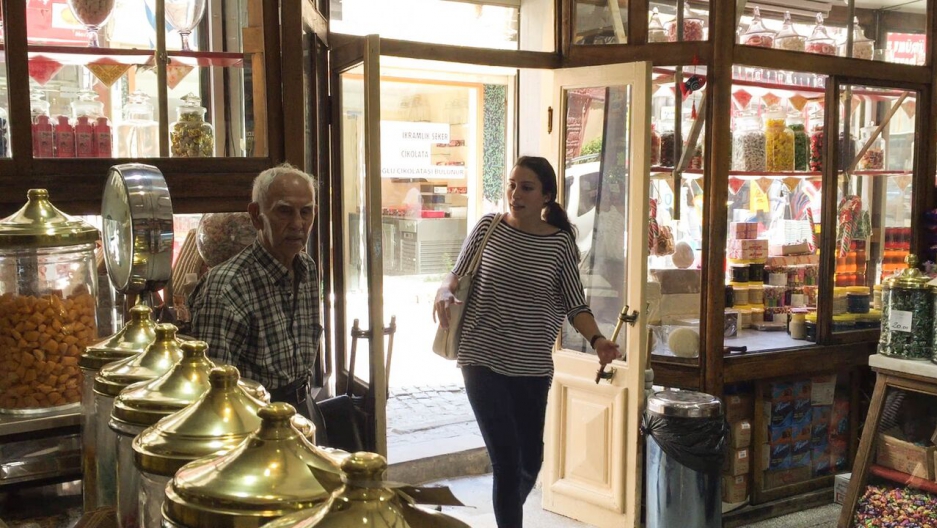 Arzu walks into her grandfather's candy shop in Istabul. She'll break with tradition and will take it over one day.

When it comes to making Turkish sweets, the Altan family sticks to tradition.

Since 1865, Altan Sekerleme candy shop has served handmade Turkish delights and akide hard candies from the same store nestled in the cobblestone streets of Istanbul’s Kucukpazar neighborhood. Steeped in the centuries-old commercial life of the former Ottoman capital, the family trade has been passed down from father to son for four generations.

But that tradition is about to change. Current manager Hakan Altan has one child: 27-year-old daughter Arzu. She’s a mathematical engineer with a masters in business development — not your typical Old City merchant.

In old Istanbul’s bazaars and back alleys, artisans continue to hawk their wares like they did in Ottoman times, when Istanbul was a Silk Road hub. Nowadays, caravan merchants have given way to tourists who help sustain skilled craftsmanship in the face of mass-produced goods. But the persistence of these historic trades has perpetuated one stubborn tradition — men still vastly outnumber women in the commercial life in the Old City.

Arzu has faced traditional attitudes toward women vendors in the Old City. “People think that women have less information than men,” she says.

Customers don’t trust her advice. “’Where is you father? Your father comes and I will ask him,’” they demand.

Turkey performs poorly when it comes to bringing women into the workplace. In the 2015 Global Gender Gap Report, Turkey ranked 130th out of 145 countries. Only about 30 percent of Turkish women are employed in paid work, according to TurkStat’s 2014 Household Labor Force Survey.

But women like Arzu are making inroads in business in Turkey. Women own 40 percent of small- and medium-sized business in Turkey according to the International Finance Corporation of the World Bank. Among women with college degrees, 72 percent are employed.

Arzu has enjoyed an enriching education — her family encouraged her to pursue graduate school and to work in other companies to gain business experience. Later, they say, she can return to the candy shop when it is her time.

“When I come back here, I feel that I am at home,” says Arzu.

Her grandfather Abdullah Altan, now 93, still comes to the shop every day despite having passed the business on to his son Hakan. Abdullah is a neighborhood fixture on his wooden chair outside the storefront, jars of akide candy gems glinting in the window behind him.

“I left school in 1935 and started working here with my grandfather,” he recalls. He worked at Altan Sekerleme for 70 years, with just one four-year break — to fulfill his compulsory military service.

For his son Hakan, the Altan family trade is interwoven with Ottoman lore. He explains how Ottoman janissaries, the elite imperial army, would boil akide in large copper vats and deliver them to the sultan when they were pleased with their salaries.

When salaries shrunk, the janissaries would storm the palace with their empty cauldrons. In Turkish, to “raise the cauldrons” means to revolt.

Hakan is not one to raise the cauldrons against tradition. Quite literally, the shop has been using the same copper cauldrons for over 80 years.

But Hakan does worry about the traditional candy business. Sales typically spike at the end of Ramadan, when families deliver gifts of Turkish delights and akide to friends and relatives. He’s noticed that there’s less demand than in the past.

“Candy-making is a Turkish art, but it’s unclear how it will continue, as traditional customs, even the way people interact with each other — taking gifts to each other, meeting each other — is declining,” Hakan worries.

Not to mention Turkey’s cratering tourism industry. With multiple terrorist attacks targeting tourists in Istanbul this year, international visitors to Turkey have dropped by a third, according to the Tourism Ministry. July’s violent coup and subsequent political instability may only make matters worse for vendors in the Old City.

“Compared to past years, there’s a serious drop in sales,” acknowledges Hakan. “But we’ll be fine, we’ll make it through.”

Perhaps Arzu’s management expertise will come in handy. Armed with a masters degree in business development, Arzu feels ready to help move the business forward. She mentions tapping into a younger generation of customers as one of her primary business goals.

“Everyone trusts me that I can do it in the fifth generation,” she says. “This is the first generation of the women!”

As for her grandfather Abdullah? He has no qualms about a woman taking charge next generation.

Nihal Kayali is a journalist with The Fuller Project for International Reporting.