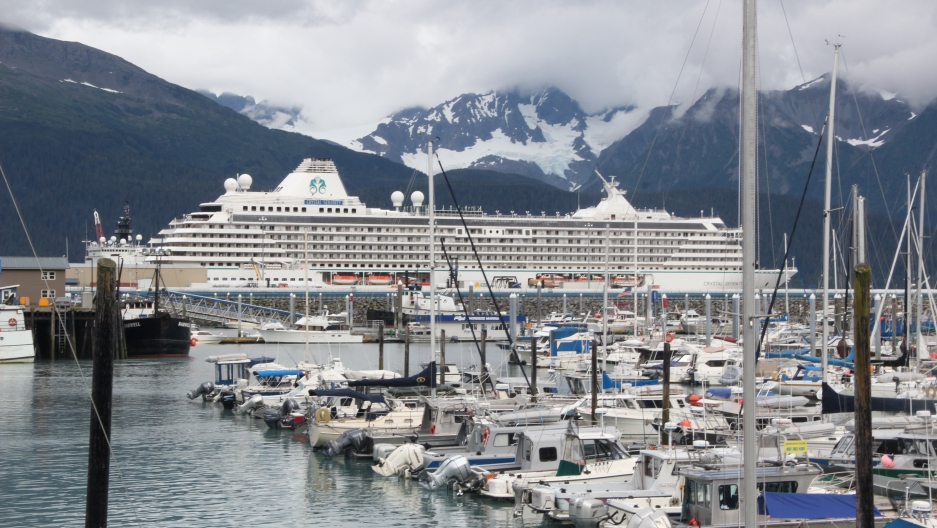 The Crystal Serenity docked in Seward, Alaska prior to its departure for the Northwest Passage.

The largest commercial cruise ship ever to attempt the Northwest Passage starts sailing through its frigid waters this week.

The sea route over the top of Canada has historically been impassable, but ice melting in the Arctic has in recent years cleared a path for shipping vessels. Now, a 1,600-person, 13-deck cruise ship is plying those waters, too.

The Crystal Serenity left Seward, Alaska last week on a 32-day cruise that will take it around Alaska, through the Canadian Arctic, past Greenland and finally to New York.

The ship’s captain, Birger Vorland, said the ship is equipped with an ice navigation system and thermal imaging to avoid hitting any remaining ice chunks.

"We have installed every possible electronic gadget we can get, including a forward-looking sonar to be able to scan the area in front of the ship,” Vorland said. “We also have installed a couple very powerful ice search lights."

The ship is traveling with an ice breaker stocked with emergency supplies and two helicopters.

That's partly to address concerns about the dangers of a rescue if it one were needed in the remote and icy Arctic.

“There definitely is a lot of concern [about safety],” said Rachel Waldholz, a reporter for Alaska's Energy Desk, a public media collaboration focused on energy and the environment.

While the cruise ship is passing through the Arctic, the US Coast Guard, Royal Canadian Air Force and Alaskan state agencies this week are staging a massive search and rescue simulation in the Bering Strait.

The live field training will give these agencies practice coordinating a rescue in frigid waters that cross international borders.

“We just haven’t had to deal with this before,” Waldholz said in an interview with The World. “We haven’t had to have these kind of resources ready in case something goes wrong.”

Safety isn’t the only aspect of the cruise that locals are worried about.

The ship has already stopped in Nome, Alaska, population roughly 4,000.

“A ship with 1,600 people on board is a big influx,” Waldholz said, “so there was a ton of preparation that went into it just [making] sure that there’s enough for folks to do.”

Waldholz said some Canadian towns where the ship is stopping are much smaller, with fewer residents than there are passengers on the Serenity.

The ship’s captain Birger Vorland visited some of these small Arctic communities, and said they are "apprehensively excited" about the onslaught of visitors.

"At the same time they're not sure how to deal with it really, because there's so many people compared to what these local communities have,” Vorland said.

The voyage has prompted criticism from some environmentalists, who see the cruise as capitalizing on climate change and further impacting a relatively untouched part of the world.

Rachel Waldholz said Crystal Cruises is exceeding environmental regulations for wastewater discharge and is using grade of fuel oil that would be easier to clean up in the event of a spill.

“But the concern is sort of what happens next,” Waldholz said. “All of these measures are voluntary… will other companies follow suit and follow sort of the same high standards?”

Read more about the voyage through the Northwest Passage in Rachel Waldholz’s story for Alaska's Energy Desk.