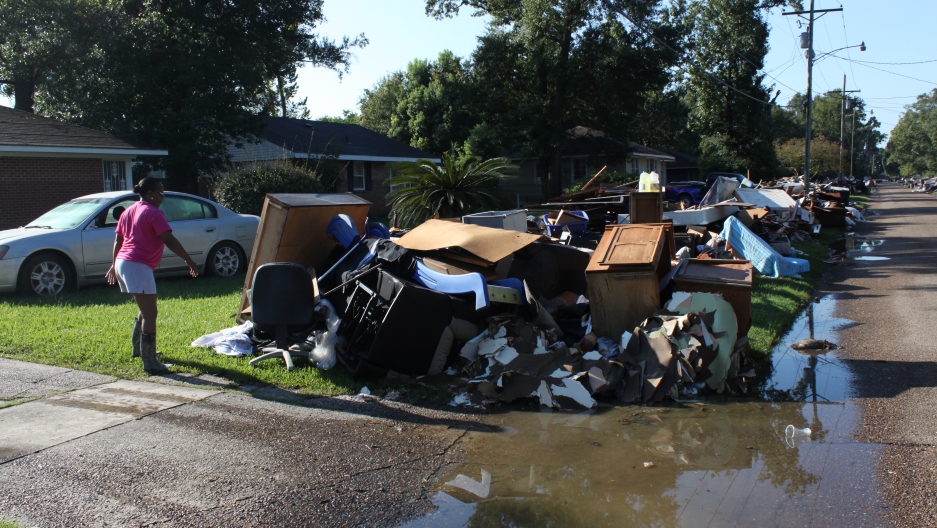 A homeowner cleans up debris from her home in Baton Rouge, Louisiana.

They’re purpose-built “storm trucks” — sleek, black, 40 feet long, each carrying two huge bins that together can hold 15 tons of possessions and mementos — and each truck with its own mechanical claw that can lift more than a ton of memories at a time.

The storm, which dumped more than 2 feet of water on the southeastern part of the state, ruined so many homes that the region has had to call in an army of vehicles from more than half a dozen states to help clear away the debris. 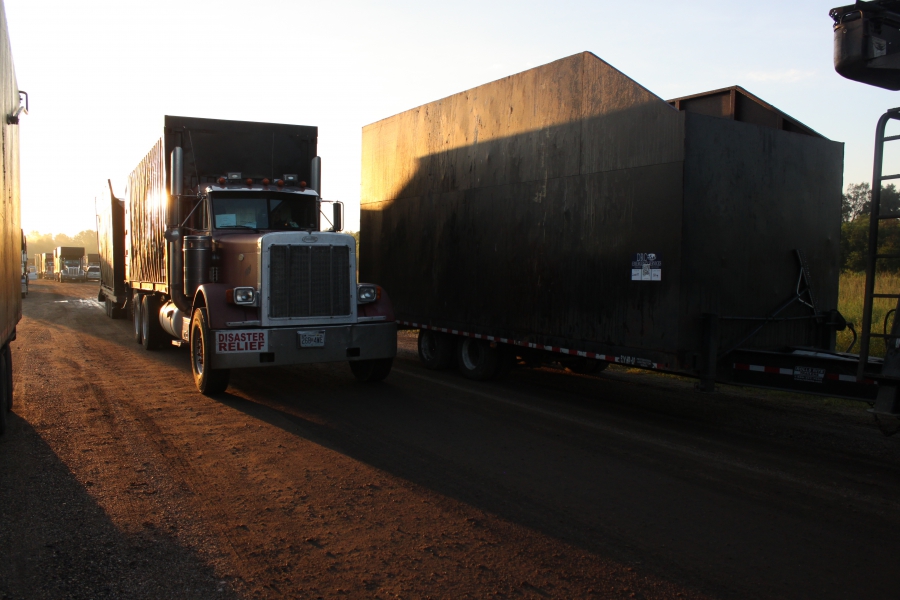 Trucks head out from a lot in Baton Rouge to remove storm wreckage across the city.

“I had just finished up work on the flood in Houston when I got a call to come here,” said Glenn Tucker, the owner of one of the trucks. “There’s a lot more on the way. ... I have a friend who’s got nine trucks coming today from Texas.” Scores of trucks have already arrived from all over the country, and more are on their way.

It’s difficult to get across the full extent of the destruction in Louisiana. The official numbers — more than 40,000 homes affected and 100,000 FEMA applications filed — will rise as more damage is tallied. You can drive three hours — from Hammond in the east to Lake Charles in the west — and see huge piles of waterlogged possessions on curbs.

On many streets, the piles of storm debris stand in front of every single house. In Denham Springs, 15 miles east of Baton Rouge, as many as 75 percent of the houses were completely flooded. On Saturday morning, Mary Alice Many stood in front of her house and directed a crew of friends, family and volunteers as they cleared out her family’s last possessions.

"My mother built this house,” she said. “My son is third generation here.” Two weeks ago, a day after the rain began, Many and her husband saw how fast the water was rising and realized they would have to leave. As the rain fell, her family packed up and struggled to get a few boxes into a small trailer.

“At midnight, my husband turned off the breakers. We pretty much said goodbye, cried and left. And I knew what I was coming back to.”

They returned five days later to find that the water had gone 5 feet up the walls before it receded. Almost everything, including the kitchen tiles, would have to be junked. Many gave a quick tour.

“This was my living room. Used to be really pretty. This was my son’s room, where we found a snake yesterday.” The flood water had left behind the smell of sewage. Many rushed to save what last things might be salvageable — a couple of wall brackets, a painting her mother had made. A friend passed by carrying a dirty box.

It joined the garbage on the curb, waiting for a storm truck to pick it up and haul it off. 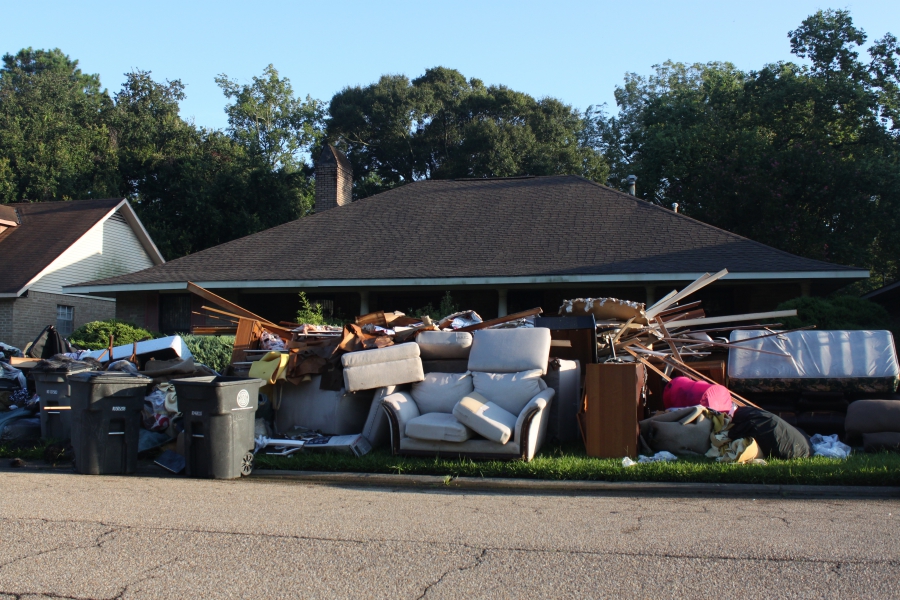 Piles of debris, like this one in Baton Rouge, are common outside homes across southeast Louisiana.

These garbage piles include not just the contents of people’s houses, from appliances to stuffed animals, but also much of the houses themselves: stacks of broken drywall, insulation, baseboards, cabinets and tiles. When water gets into a home and sits for days, everything below the waterline needs to be stripped to beams and studs and dried out properly or mold will set in and the house will rot.

Gutting houses is now the major activity across more than two dozen parishes affected by the storm. In hard-hit parishes like Livingston and Ascension, almost every major intersection has signs up with phone numbers advertising “House Gutting”; “We Gut Houses”; and even, “We Buy Homes — Any Condition.”

Contractors — the ones not flooded out themselves — are working overtime to answer all the calls from homeowners returning to their houses.

As homeowners rush to clear away damaged possessions, FEMA and local authorities have hurried to get trucks out to clear away the debris. At 6:30 on Tuesday morning, about 20 storm trucks began heading out from a lot east of Baton Rouge to points across five zip codes.

On a quiet street in the north part of the city, Glen Tucker got out of his truck, climbed into the control booth and raised the crane. Steadily, the big jaws of the picker snatched up the debris on the curb and fed it into the bins on the truck. Down the street, resident Fred Reed watched while a crew of workers began to strip his house, tossing doors and drywall onto the pile of possessions in front of it.

“I’ve lived here 43 years,” he said, “and we’ve never flooded like this before.” In the afternoon of Aug. 12, he’d walked through chest-high water, carrying a change of clothes and a toothbrush above his head. Now, while the storm truck worked down the street, another truck loaded up Reed’s ruined car. The driver had come in from Ohio three days ago and said in that time he’d taken away more than 40 cars.

Tucker estimated it would take him the rest of the day to finish with the block — about five loads’ worth. His truck dropped the waste off at the city’s construction landfill. The remains of Mary Alice Many’s family home will end up in another landfill east of the city, which expects to double its daily intake of 3,200 tons as the cleanup operation gets in full swing. Across the state, landfills are operating overtime and trucks are lining up at the gates. They will be busy for weeks to come.

Parish by parish, street by street, house by house, an ocean of ruined possessions is being picked up, taken away and dumped into holes in the ground. Many people, like Reed, had never seen their neighborhoods flood, were not required to buy flood insurance, and didn’t. He is eligible for up to $33,000 in relief from FEMA, but, based on payouts from previous storms, can expect to receive much less than that.

At this point, he and many others in flood-hit streets were too busy working to think too much about the full extent of the economic disaster. Reed didn’t even know where he’d be staying.

“Anywhere I can!” he said. “I’m a disabled vet,” he added. “You’d think they’d be able to think of something.”

Then he grabbed a dolly and began to load up boxes.